In all truth, I can name a dozen of things that might go wrong when wielding lava bare-handed, even for a troll.

So just this once, lets not worry about realism and say the magic does it all for him.

As for the rope dreads, they're not meant as armour but as a symbol of power. More on this soon.
Want to see more of my art ? Visit my portfolio !
Top

Looks perfect to me. I don't really have an opinion on the flame motives or the dreads, I think it probably works just fine with or without them.
Top

This troll has a lot of originality and character. I love the detail on the rope ornaments and yes even the beard, lol! I think I see where you were going with that power symbolism idea: maybe this shaman admires some powers of the dwarvish runemasters? Hmmm.

The lava effect on the hand is good, as some people have mentioned, but I think it could look better with dark flecks as if there were pieces of partially unmelted rocks in it. Right now to me it looks vaguely like he's dipped his hand in some radioactive paint.

I'm going to nitpick on his circle belt. Everything else about the troll and his design is very chaotic and unpredictable. But here we have a very predictable alternating pattern. I suspect you did that to make the glow more apparent. But, it would be better if they were all the same color, random colors, or random pattern IMO, in fitting with the troll's character.

As for the tattoos it does look good either way. I slightly preferred it without these because there is already so much nice detail.
http://www.wesnoth.org/wiki/User:Sapient... "Looks like your skills saved us again. Uh, well at least, they saved Soarin's apple pie."
Top

Thanks to everyone for posting your comments, I really can't stress enough how much it helps in the long run.
@Sapient: you nailed the beard thing. I thought it would be fitting for the shaman to imitate the symbols of other species' powerful individuals/respected leaders; the beard of patriarchs being a obvious choice since it is a sure differenciation among trolls.

Now back to my regular trolling. Until I'm able to post a final shaman, here's the revised sketch for the troll warrior. Behold!

Edit: on a side note, I'm having doubts about the Great Troll. While pretty much final design-wise, I don't know if this unit gets used a lot. My best guess is that Gruu from SotBE and Grog from UtBS might be Great Troll types (both have campaign-specific portraits already), but other than that I don't remember seeing any in the campaigns I played.
In other words, considering we already have a fully functional Troll Hero, there might be a better use of my commissionned time than to draw a barely-used, redundant Great Troll. Could anyone bring some light on this ? 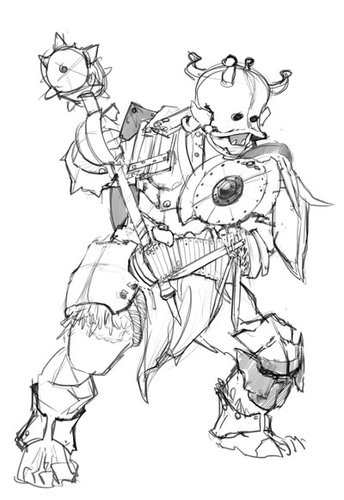 This looks cool, and I like the pot as a helmet, but the trolls in the sprites don't wear any armor. Decoration reaches a maximum on the troll shaman. I think this is going overboard on armor for a Wesnoth troll, and it doesn't fit in with the other portraits either.
Campaigns: Dead Water,
The Founding of Borstep,
Secrets of the Ancients,
and WML Guide
Top

There's something off about that pot helmet to me. Maybe it's because those eye holes in the pot seem to low, there wouldn't be much space left for the nose

Co-Creator of The Fellowship of the Clay (BfW 1.10) ~~ Maintainer of the German Code of Conduct

beetlenaut wrote:This looks cool, and I like the pot as a helmet, but the trolls in the sprites don't wear any armor. Decoration reaches a maximum on the troll shaman. I think this is going overboard on armor for a Wesnoth troll, and it doesn't fit in with the other portraits either.

I know what the sprite looks like, but the unit description does mention armour, and orc-made. It has to look different from the other trolls. I can tone down the armour by removing some parts, but if I stick too much to the sprite, all we'll have is a naked troll with a steel hammer. Not what we want either...
Want to see more of my art ? Visit my portfolio !
Top

LordBob wrote:I know what the sprite looks like, but the unit description does mention armour, and orc-made. It has to look different from the other trolls. I can tone down the armour by removing some parts, but if I stick too much to the sprite, all we'll have is a naked troll with a steel hammer. Not what we want either...

Sounds like a huge issue. There is only one possible solution of this problem... Change the sprite!
Top

the two discs on the right side of the shamans belt look flat and somehow unfinished. besides that - both portraits looks just great.
Top

I'll post a final shaman tonight. Until then, here's a study of the rocklobber. I'll dedevelop whichever of those 3 poses receives the general approbation or, failing consensus, the one I like best 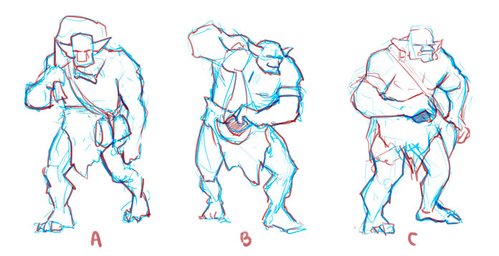 Personally, I like A best. B seems like he's contorting his upper body unnecessarily (he looks a bit more hunched compared to the other poses), and I don't think the sling is evident enough in C.

LordBob wrote:I know what the sprite looks like, but the unit description does mention armour, and orc-made. It has to look different from the other trolls. I can tone down the armour by removing some parts, but if I stick too much to the sprite, all we'll have is a naked troll with a steel hammer. Not what we want either...

Sounds like a huge issue. There is only one possible solution of this problem... Change the sprite!

Most of the portraits have more or less differences to the sprites.
That is no problem for me.
I like the idea with the armour, it makes this Troll portrait different to the other Troll portraits.
Just a naked Troll with a hammer is a bit uninspired, don't you think?
Author of Antar, Son of Rheor ( SP Campaign) | Development Thread + Feedback Thread + Replays of ASoR
Top

Ok, here we go, if you are making all this effort to draw those portraits, peeps should make the effort to comment at least.

The millstones in the troll shaman belt (I suppose they are millstones) look too thin at the moment, maybe you just haven't detailed that part yet.
But I have a question about the hole in the center of those millstones.
Is round hole most stereotypical?
I mean, myself I would expect square holes like this:
http://2.bp.blogspot.com/_xjcwwA-nj8k/S ... stone2.jpg
So, thinking that round holes make them look like donuts, I googled for millstones and indeed many of them do have round holes, and some various other shapes.
Maybe varied types of holes would work even better, as you are going to draw them individually anyway.
Or maybe detailing the holes in the millstones too much would put attention in the wrong place.

As for the tattoos, if they are supposed to be chiseled into the stone, I guess they would need some shading to look like chiseled rather than painted.
Troll hero has paintings, why would shaman go without?
Chiseled might be challenging at that scale, though.
Right now, the only thing that is visible in the smaller scaled portrait is just one round shape on the shoulder, anyway.

The red rope on the left hand looks way too saturated in my opinion, as if dyed with some of the more intense tones of ochre, bit unreal red in my opinion.

To some extent, I agree with TSI about the eyes.
Makes me think that such glowing eyes should put some light in the eye sockets, maybe that could be one of the reasons why they look bit unreal.
No idea if putting light from the eyes into the eye sockets would be a good idea, though.

The ears of the troll shaman that disappear into the rest of the picture right now, aren't those too low?

The helmet on the troll warrior looks ridiculous (in my opinion), and it feels like... well that's a long story that I should try to say it short... looking at the whole picture of the troll warrior it feels like you might have been thinking about the troll looking ridiculous while drawing it.
I don't know how or why, but the way people feel while drawing seems to affect "what feels right" to them while they draw, and it tends to show in the drawing, so that's what I meant by that cryptic sentence.
campaign ruthless in your nearest 1.11 add-on server
some wesnoth-related drawings
Top

My personal opinion about the troll warrior is that you went a bit overboard. Sure, the portrait can differ from the sprite a bit, but that much? Also, it DOES look a bit ridiculous. I personnally would go with less armour. Maybe just a breast plate with shoulder/elbow/knee pads? If a helmet is wanted, maybe just some kind of cap that doesn't cover the face?. Alternatively, if you're having second thoughts about making a great troll, why not use that base for the troll warrior? It was seriously awesome. If anything, maybe just shrink the hammerhead a bit so as not to compete in size with the troll hero's. But it's not really a must, as the big head would indeed look great.
Jazz is not dead, it just smells funny - Frank Zappa
Current projects: Internet meme Era, The Settlers of Wesnoth
Top

Dixie wrote: If a helmet is wanted, maybe just some kind of cap that doesn't cover the face?

Given that, as I understand it, a troll is basically ten feet of muscular rock, surely its face is the one thing that it really would want to cover with armour?
While I realize that my opinion alone won't carry much (any) weight, I personally like the heavily-armoured look. For one thing, it sets the unit apart from other Troll units (there's only so many variations on the theme of 'naked and grey'). Also, while trolls aren't known for intelligence, presumably they understand the value of scaring your enemy witless. I can't think of many things more frightening than a massive troll warrior, swinging a hammer bigger than I am, and with metal covering everywhere that I was thinking of stabbing him. Though if a fearsome appearance is desired, a cooking pot might not be the way to go...
Nothing is true; everything is permissible.
Top
Post Reply
684 posts