Clearly, the young ogre is not picking his nose while talking because he doesn't have any manners at all, but because he feels awkward for his bent nose and is trying to trick the viewer into believing that his nose is otherwise straight but looks bent because he has his finger in his nose.

The black thing on the head is dried blood because he was hit on the head when he was born.

I hope everything is interpreted now : )

Special thanks for the necklace.
campaign ruthless in your nearest 1.11 add-on server
some wesnoth-related drawings
Top

That hair strand near the ear gives me "mp3 player headphone" feeling...
Spoiler:

but I guess it's just me. Everything looks great, then.
Top

I'm taking note that the ogre's hair strand can improve, but this will have to wait until a later date. For now, I've stayed long enough on him: time to make some progress on the rest of the portraits!

And so, updated hero sketch with rough colours. 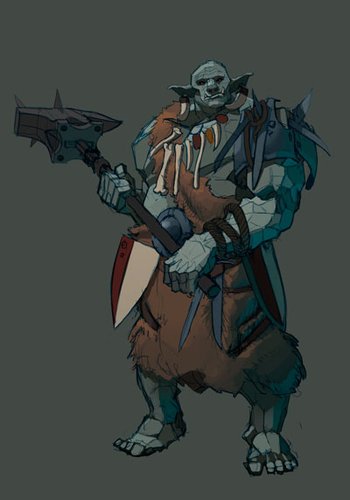 Bah, it's a shame the full figures can't be used somewhere, this one looks great so far
Biased Random Damage Mod
Top

This comment is a bit late, but:
As a slinger who was involved in the argument regarding the Rocklobber's sling in the last thread, I really just want to say that you have nailed it. It's beautiful, it fits in with the rest of the portrait wonderfully, and it looks like an actual roughly made sling, scaled to a super-humanly strong monster. I'm loving the trolls in general, but the Rocklobber's sling really warrants praise - I just should have got around to this sooner.
Top

@TheCripple:I did remember the sling discussion and so checked it when designing the rocklobber. It was really precise and a great help, so I'm glad the result matches your guidelines.

Finished the great troll/alternate troll hero, and with him the last of the generic troll portraits.
I had to cut the hammer due to frame size limitations, but I do not think this is a bad thing as it tones down the "oversized weapon" feeling while still successfully hinting that said hammer is darn big.

For those curious, I've posted the full figure on my blog. 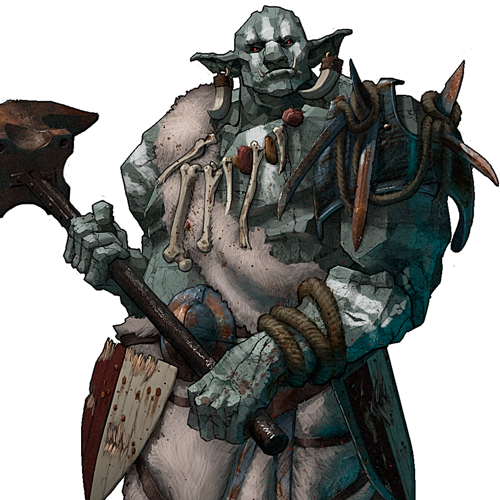 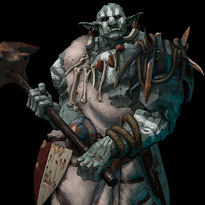 One word: Epic. The fur is a really nice touch; I especially love the idea of it being taken as a trophy from a yeti!

It's really a pity the hammer has to be cropped though... IMHO it detracts a bit from the impact of the weapon (no pun intended) and makes it a bit more difficult to recognize it as being made from an anvil.
"I'm never wrong. One time I thought I was wrong, but I was mistaken."
Top

LordBob... HOW do you draw so amazingly?

That portrait's textures are so lifelike!

I'm all for removing the crop, but it implies either:
- fitting the entire body plus hammer inside a 500*500 frame, which will make him look a lot smaller,
- or cutting the right-side shoulder instead,
- or having a 600 pix width. So far, we know that the 500*500 limit can be exceeded without any major side effects, which has already been done for the elder wose in tRoW.

If any I'd go for the third option, but I'll leave that decision to the smart people around who've a long-term vision for what the game should and should not do in manner of display


@Vultraz: that's partly because some of them do rely on photo overlays

(the rock, namely). The rest is careful observation of lots of reference.
Want to see more of my art ? Visit my portfolio !
Top

That rock is quite fantastic. It makes you wonder what manner of tools the troll needed to get his ears pierced. I especially like the way he wears shields as a part of his belt.
My spritework can be seen here.

The 500x500-breaking was intended to work only vertically, but doesn't actually work properly yet. Right now, if a portrait is too large to fit, it gets scaled.
Wesnoth UMC Dev
Stories of Tarlyn (on hold) - Era of Strife - The Dark Hordes
Top

These portraits all look great. The only slightly off thing about the ogres, it seems to me, is that they look really *clean*, like they live someplace easy and just stepped out of the shower. Being a bit scraped up, with some dirt, scars, scabs, etc. would go a long way to making them look more unpleasant.
Top

Well, the hammerhead is extremely large, even for an anvil.
I don't think many anvils were larger than kite shields.

The kite shield, with the very nice detailed broken wood, strangely, was what I was looking at most.
The rope, on the other hand, seems blurry, maybe it could use some sharpening as it is in front?
Right now the rope looks about as smooth as a very big earthworm.
campaign ruthless in your nearest 1.11 add-on server
some wesnoth-related drawings
Top
Post Reply
684 posts