Crendgrim wrote:If you look at the old ogre portrait, it has these huge fangs and spiky ears which differentiate him from a human. Also, it is more muscular than fat. This young ogre looks much more like an old man to me.
I, at least, would not have recognized it as an ogre (if it did not have those pants

The fangs, ears & muscles make it look like a type of orc, it's good to be rid of those.
Top

"Oh my, we have another race we must make look non-human... I know! Let's give it spiky ears and long fangs! It's completely original and not-cliche!"
Top

On the subject of ogres looking sort-of human, here's an extract of a discussion I had with Jetrel; it predates my first ogre concepts and will hopefully shed some light on where I'm going and why:

Jetrel wrote:So, what I'd suggest would be something reasonably conservative which isn't likely to offend many people's ideas. Something that looks quite human, but more "dopey" in a big, strong, but clumsy way - probably a lot like most classical depictions of giants. Ogres very much should look capable of violence, but I would have them differ from the orcs in looking less "vicious" and "toothy", and basing their archetypical power more on bulk and mass. To wit; if orcs are wolves or hyenas, then ogres should be bears or hippos.

I think in general fantasy and faerie tales, ogres are probably based on very real instances of humans with some giantism birth defect; cruelly, the stereotype pins them as being "simpletons" which is often not the case, but look at e.g. Andre the Giant. Historically, there were a notable minority of people born like that, and even though they get normal jobs now, back in history, these poor saps almost always ended up as fighting men, because, well - they were huge.

Based on this, I made my ogres more man than orc (orcs themselves already being very much like primitive men), yet different enough from a human to cause repulsion. Additionnaly, I considered how most animal species undergo radical changes in growth and how alike diffrerent species might look in their youth. Thus came the idea that ogres would be close enough to mankind that a juvenile ogre can be mistaken for an oversized human child, with discriminating features that become increasingly obvious with age. Hence the rather-human young ogre and the upcoming deformed adult ogre.
Want to see more of my art ? Visit my portfolio !
Top

The only problem I would see with the young ogre at this stage is that the shadows are too gray in places, having a slight "gray fog" effect.
The reflex light from skin should, in my opinion, make the shadow more saturated at the right side under the arm, and also under the left arm if there is such reflex light from the more heavily lit belly.
Reflex light has the color of the surface it diffuses from, i.e. the color we see the surface, as far as I know.
And then some more, because it hits the same colored surface again before it gets to the viewer.
Might benefit from some more confident contrast and saturation in the shadows, at least as I see it on my monitor.

It seems there could be more intense less saturated primary light on the arm, if the reflex light in the shadow is more saturated (whatever, you probably know better, anyway).
And, isn't the under side of the arm often less tanned?

Also, the (probably) shadow at the side of the head looks like sparse gray hair, making it look like the young ogre is a man gone bald on the forehead.
I would rather suggest softer facial features, like removal of the small shadow from the center of the cheek.
I would guess the age is no less than 30 as it is now.

@ "So much discussion over a single unit, and no two of you seem to agree."
As far as my opinion goes, we didn't waste your time posting duplicate opinions : )
You didn't write it should be a vote, did you?
campaign ruthless in your nearest 1.11 add-on server
some wesnoth-related drawings
Top

How young is this young ogre? More child or more puberty? I ask because his crotch area looks like larger than the one of the old ogre.
Top

Good point, the chest hair seems to suggest at least puberty, the wrinkles on the belly make me think like 50 maybe.
campaign ruthless in your nearest 1.11 add-on server
some wesnoth-related drawings
Top

I honestly thought "young ogre" is like "young adult", in his 20s (whatever equivalent in ogre years would be). It's not troll kid, who can't even walk on two legs, but kicks ass anyway.
Top

I have to say you keep improving, LordBob! I really like the young ogre (all quibbling about the meaning of young aside), but I think there are a few things about the face that lend to other people's feeling of uncanny valley. The biggest is the nose. Either one nostril is *much* wider than the other, or the nose isn't ... twisting (?) right as he's picking/pulling at the enlarged nostril, so it looks in a way like the act of the hand in the nose and the nose itself are not reacting to each other. The other thing is really minor, and it's that the beautiful shading and strokes seem at odds with the lineart, and the proximity of the very crisp lines of the arm across his face (and to some extent his ear) to this painterly shading is very pronounced around the face area.

I agree with the poster who said this looks more like an old man than an ogre. In part this is because he looks not bald, but balding--it's that grey on the side of his head. He also does not look like he would be the sort to want to eat elves or humans.

His pants are too clean; his body isn't dirty enough; maybe some blood on his sheath. Being low in mental ability, perhaps he would like trinkets, for example a nice finger bone for the pendant of a necklace.

He does look dumb, but not dangerous.
rmj
Top

On the matter of ogres eating other races, I'm curious to hear where this comes from (cheesy dialog ? :p). I myself haven't played campaigns where the player meets ogres so I don't know how they behave ingame, but their background doesn't really mention who or what they actually eat.
Either way it would really be about time that we fleshed out the background of wesnothian ogres, if only to cut short the discussion on how they look

I've noted a list of corrections on the young ogre based on various comments :
* remove grey patch on the head
* nose should twist from the picking
* remove/lighten lines in the face region
* lighten the forehead for a better skull shape
* remove belly wrinkles
* check arm cast shadow /skin tones / reflected light
* warp crotch region to match belly
* add a belt buckle
* add dirt to the trousers / blood on the cleaver’s sheath / maybe a trinket

Once these are done, I'll consider him final.

For a comparison, I've been refining the adult ogre sketch; it will hopefully illustrate my earlier statement on their growth. 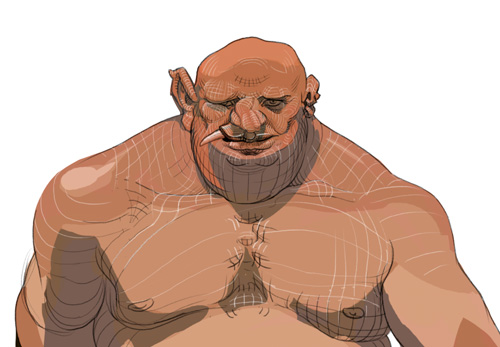 "Ogres are giant creatures...remarkably similar to humans in form, though large and misshapen".
My problem with the young ogre is that he neither looks stronger than an average fat human nor looks misshapen at all. There is nothing in the portrait suggesting he is a large and strong cannibalistic monster.
Top

LordBob has just explained his vision where they get more misshapen with age. Young ogres look nearly-human, while adult ones look, well, just like he posted.
Top

LordBob wrote:I myself haven't played campaigns where the player meets ogres so I don't know how they behave ingame

In TSG, an ogre says that elves are good meat, and in UtBS ogres are said to "prey" on anyone who is weak. Apparently they do eat people. They are also very stupid, but I think you've got that covered!
Campaigns: Dead Water,
The Founding of Borstep,
Secrets of the Ancients,
and WML Guide
Top

I still wonder how the idea that hammers, axes etc. need to be ridiculously oversized to be cool entered fantasy lore. Is it just the padded stuff they use in Live-Action-Role-Playing suddenly was considered cool?

This is how "small" they were: http://upload.wikimedia.org/wikipedia/c ... ern_01.jpg
And this is the damage they did: http://www.the-exiles.org/Images/lejuep ... mage11.gif
I am a Saurian Skirmisher: I'm a real pest, especially at night.
Top

taptap wrote:I still wonder how the idea that hammers, axes etc. need to be ridiculously oversized to be cool entered fantasy lore. Is it just the padded stuff they use in Live-Action-Role-Playing suddenly was considered cool?

The hammer is for a Troll, not for a Human.
A huge Troll with a tiny hammer will look weird, don't you think?
Last edited by Adamant14 on June 4th, 2012, 4:13 am, edited 1 time in total.
Author of Antar, Son of Rheor ( SP Campaign) | Development Thread + Feedback Thread + Replays of ASoR
Top
Post Reply
684 posts