G) I like it because it says: "Please do not expect me to share your pathetic concerns", but wouldn't the sword be more comfy to draw and to store in the hip bone, and even more so, aren't the ribs supposed to be somewhat mobile? Would mess up the balance of the image, probably (although the same wind that affects the robe should affect what is hanging from the sword handle, and mess it up anyway).

H) Although it resembles some of the poses I liked earlier, it has lost all of its subtle mannerism, and just looks like a statue placed on soft ground so it has become tilted over time.

I) I don't like, because this little skull peeping from behind the curtains looks like a coward, which I cannot imagine saying the lines the liches say in campaigns.

A, B, C) They all seem quite generic.
C with "facial expression" of B would be my choice (not body of B, because it looks pregnant).
C has a very cool snake skull, though the snakes in general do not seem to fit very well in any of the pictures imho. First, they are hanging down at a curve that looks too stiff for a snake, maybe a Z-shape would be better, or curved around arm or something. Second, if I didn't know, I wouldn't think it is a part of the lich, but I would think it is a characterizing symbolic additional animal in the picture (even if it is in the sleeve) like they often appeared on medieval paintings. Like a small dog at a lower corner of a woman's portrait might symbolize faithfulness/loyalty. And like the lynx in Goya's "Dream of Reason", etc.
Btw I very much like the way you draw torn cloth, a pity it was mostly cropped in the earlier liches.
Head and shoulder bling of C with torn cloth of A might be an interesting contrast.
campaign ruthless in your nearest 1.11 add-on server
some wesnoth-related drawings
Top

Three rulers: A – C
Best from the great three is emperor: B

homunculus wrote:[…] (not body of B, because it looks pregnant).

Snake tail is there, that is why you perceive it this way.

As for others, odd poses and bodies spiked with weapons do not add dark intellect or feeling of dignity to them, but rather make them appear as mindless beasts with exception of F. Which still is to different to serve as generic portrait.

Wraiths:
I hope that you decided to work on something without bones...
Top

homunculus wrote:[…] (not body of B, because it looks pregnant).

Snake tail is there, that is why you perceive it this way.

Nah, I am quite sure it's the hip bone, because of the pose that is specially exaggerated to make the hip bone affect the robe. But at a quick glance the resulting flat highlight makes it look like pregnant. At a quick glance it would not be reasoned as snake, anyway. I mean, I don't really think the lich is pregnant, and whatever that implies

I am curious about the reason to prefer B over the alternatives, although it is none of my business, really.
campaign ruthless in your nearest 1.11 add-on server
some wesnoth-related drawings
Top

i like H and I because they seem to come from a different age entirely, whose gods and mortal species are no longer recognizable. the clothing on H looked a bit pompous, but may work depending on the personality. i like B for its regalness and sense of unchallenged power, and that it hints at being female.
with G i would wonder why the supposedly ancient lich hadnt settled its legitimate grudge long ago.
Top

I like A, D, or G, with G being my favorite, but I do agree it could use some still to make it more 'ancient-lich-y'.
Creator of Shadows of Deception (for 1.12) and co-creator of the Era of Chaos (for 1.12/1.13).
SurvivalXtreme rocks!!!
What happens when you get scared half to death...twice?
Top

tr0ll wrote:i like H and I because they seem to come from a different age entirely, whose gods and mortal species are no longer recognizable. the clothing on H looked a bit pompous, but may work depending on the personality.

This raises a good point - might there be some possibility to do something with archaic technology? Say, some bronze where there should be steel, worn or carried? It gets the same idea across, but to a somewhat lesser extent, which seems ideal.
Top

Thanks once again for your input. If I sum things up:
- G is our winner; to be served with added bling, hold the impalement.
- The pose of B is also appreciated, but IMHO the creature itself ressembles too much my recent lich portraits, and G might loose it's appeal if I simply changed its pose to that of B.
- I will recycle parts of H and I in the final portait, because I would indded like the ancient lich to feel from an entirely different age - an effect which portraits A to C fail to achieve.

For the woses, I agree with Cold Steel on the perspective of #21, but I'm not sure whether I categorically like that one the best; #8 and #11 are pretty good too, for example.

I don't really have an opinion on the ancient liches.
Author of The Black Cross of Aleron campaign and Default++ era.
Maintainer of Steelhive.
Top

Here's the finished sketch for the ancient lich. It is perfectible, but I think it pretty much nails the general feeling. 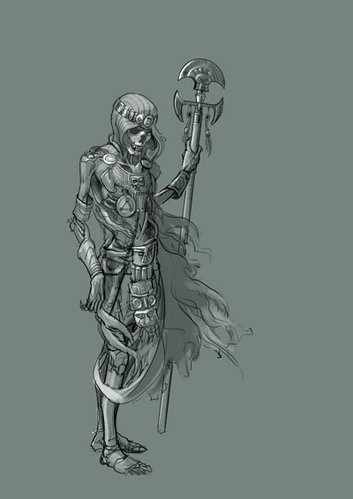 An easy way to show that this is a high level of lich would be to give him a taller hat/crown. It's a simple visual cue, but effective.
http://www.wesnoth.org/wiki/User:Sapient... "Looks like your skills saved us again. Uh, well at least, they saved Soarin's apple pie."
Top

I think this looks amazing! Can't wait until you finish it.
Creator of the Era of Chaos and maintainer of The Aragwaithi and the Era of Myths.
Wesnoth-UMC-dev, a nice place for add-on creators.
Top

It looks ancient and lich. But it doesn't look that powerfull.
"This game cured me of my real life addiction."
-Flameslash
Top

Superb work, LordBob!
It does look ancient indeed. I agree with Sapient that the headdress could be larger or more prominent, maybe a half-mask like this:

Also, I loved the cloth being fancifully blown to cover the creature's feet in your sketch (G). Those naked legs and feet do look a little destitute (which might or might not be desired). Not an artist, so ignore my opinion if you disagree.
Top

It's worth noting that the feet will almost certainly not be visible in the final in-game portrait, as the crop is usually waist-up only.
http://thespaceinvader.co.uk | http://thespaceinvader.deviantart.com
Back to work. Current projects: Catching up on commits. Picking Meridia back up. Sprite animations, many and varied.
Top

thespaceinvader wrote:It's worth noting that the feet will almost certainly not be visible in the final in-game portrait, as the crop is usually waist-up only.

You're right, forget what I said then

I'd like to add some positive feedback though if I may: I really love the understatement of this portrait in that the lich looks threatening in a very fitting "wait-and-see", patient way instead of being overly aggressive (You'd think that an ancient creature has learned to be patient and would not need to rely on adolescent braggadocio). The amount of decoration and the shape and form of the staff are just perfect, avoiding high fantasy cliché.
Top
Post Reply
684 posts