Number 3, and number 24 are my favourite woses.

Though a good half of these creatures are spookier and/or more aggressive than we'd want our woses to be...

I'm OK with that as I've already expressed (page 22 of this thread) that Wesnoth already has multiple humanoid races, so making Woses more monstrous is refreshing (of course it's up to art directors to decide this matter). I like sketches 5, 10 and 21.
My first campaign:
Inky's Quest - the Cuttlefish Campaign
Top

I don't think it is bad if a wose looks spooky, I remember some campaign where even humans said that elvish architecture looked ghastly.
And I think old trees looking scary in the dark is probably part of the creation of the living/walking tree folklore.

I like all the woses except 2 and 3 because of the arms becoming thicker towards the end, like the bigfoot and bigfist crossbreeds we see in some popular games.

Some of those look like they could be interesting challenges.

Ok, I just pick... 18 (the "winged gargoyle" tree), looks nice and interesting. How would you make that face look like it's a big tree and not a tiny detail enlarged?
campaign ruthless in your nearest 1.11 add-on server
some wesnoth-related drawings
Top

I see nothing wrong with spooky either. If someone needs a good elder wose, they can recycle kindly old Rithrandil from TRoW. I don't have a favorite, but some of them look old and decayed, rather than old and very powerful, which they are in the game.
Campaigns: Dead Water,
The Founding of Borstep,
Secrets of the Ancients,
and WML Guide
Top

It reminds me the times of drawing crazy bonsai. I would go with 1 or 3.
Top

beetlenaut wrote:I think the generic ancient lich should remain mostly humanoid to provide more contrast for the bizarre bodies of the campaign-specific ones.

Yeah, I agree with this. One or two light modifications (like a pair of extra arms) are fine, but going too crazy (like having skeletal horse legs or whatnot) is probably out.


It may be more helpful to point out aspects of individual thumbnail sketches which you like, rather than the whole sketch. By pointing that out, those can be kept if he ends up combining aspects for a final design. Then again they might not work from all angles; some designs need a pose to be evident.

Duly noted. And so, here's a run of mostly-humanoid (too much so, perhaps ?) concepts. Whichever is retained, I will most likely add some bling, decay and weird body parts, because right now some of those feel more Lich than Ancient.

Jetrel wrote:It may be more helpful to point out aspects of individual thumbnail sketches which you like, rather than the whole sketch. By pointing that out, those can be kept if he ends up combining aspects for a final design. 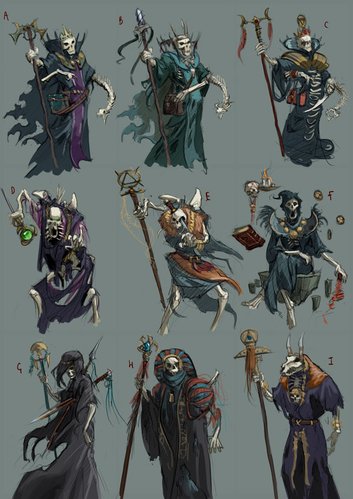 I'd say A, G or H. I really like G, it looks so dark.
Creator of the Era of Chaos and maintainer of The Aragwaithi and the Era of Myths.
Wesnoth-UMC-dev, a nice place for add-on creators.
Top

I like F and H. And unless I'm mistaken H and I are meant to resemble ancient Egypt to make them feel more ancient, right? (cool idea!)
My first campaign:
Inky's Quest - the Cuttlefish Campaign
Top

New ancient liches: I like D (aggressive) and G (threatening). F is also good as an alternative if the circumstances of encounter of a lich are hmm... unusual and peculiar.
Top

"I" looks more like ancient egypt to me, with the Set-like appearance. "H" looks more renaissance style with the puffy hat and shoulders. I really like "I" btw, maybe with some more bling.

I'm not a big fan of them being impaled, it doesn't make much sense to leave stuff like that inside yourself. I'd imagine it would be a quite a hindrance. It's alright for the less sentient like the skeleton line.

The "G" is cool but it would indeed need something more to make it look less like a normal lich.

I'm not sure how "F" would translate into an actual unit in game. It would be a bit on the odd side if he stayed on his hoverrock at all times during combat. If you want to use the concept then it would better be used for a 2-stage special campaign lich I think.

I quite like G's pose, though it needs a little more in the way of ornament and I'm not particularly fond of it being impaled in the portrait.
Top
Post Reply
684 posts