I wouldn't mess with that troll, even if he were slowed

This troll hero portrait NAILS the sort of design I was hoping for! If you make the rest of the set with similar body-form, we're good. It's quite embarassing that I had forgotten about that, and that that hadn't gotten into source control - but that's now been remedied - I've committed it to SVN just now.

The shaman, also, pose-wise and musculature-wise looks great. I don't really have an opinion on the tribal decorations, so I'll let other people fight over that.

I'm sorry for a stupid question, but what is the brown lich going to be used for? I remember it being used for Lenvan in TRoW, but now he uses the generic lich portrait, while most other characters in TRoW (including those two magi in sewers that appear in a single scenario) got great new portraits.
My first campaign:
Inky's Quest - the Cuttlefish Campaign
Top

I presume so not every minor lich looks the same (compare the large number of alternate portraits for the Grunt line).
After far too long an absence, I have returned.
According to the quiz 100% Silver Mage (85% Archmage, 75% Shyde, 67% Flameheart and Ancient Wose,58% Assassin, Troll Warrior and Berserker). And my top score is exactly how I see myself.
Top

Jetrel wrote:This troll hero portrait NAILS the sort of design I was hoping for! If you make the rest of the set with similar body-form, we're good.

This would be great.

I'm sorry for a stupid question, but what is the brown lich going to be used for? I remember it being used for Lenvan in TRoW, but now he uses the generic lich portrait, while most other characters in TRoW (including those two magi in sewers that appear in a single scenario) got great new portraits.

I checked before we set up the commission, and it's still used for something, somewhere... Basically, we decided "well, what the hell, we could remove it, and re-assign the few places that use it to the default, but liches are so common as the undead commander, that we'll make a second variation of the lich portrait, instead." We would rather reasonably and immediately benefit from having one.
Play Frogatto & Friends - a finished, open-source adventure game!
Top

@Jetrel: Yes, that makes sense and I should have thought that myself. I was more surprised that Lenvan didn't get a new portrait (he appears in a single scenario, but so do those two sewer magi), but that's unimportant to this thread.
My first campaign:
Inky's Quest - the Cuttlefish Campaign
Top

Yay for new trolls!
I like where this is going a lot, I'm especially glad that the last iteration features larger hands and a smaller head than the first sketch, I think those are really important to make him appear troll-like!

Two little suggestions: The dangly things on his head could indicate a bit of motion instead of hanging straight down. And the shaman always struck me as the shortest and most chunky of the trolls, perhaps make his torso even wider and make his neck disappear even more completely?


In retrospect the troll warrior features lots of black due to the rather extreme light-situation you put him in, perhaps take care not to overdo that in the next portraits to keep them useable in all kinds of scenarios/with all kinds of terrain.
Top

That troll hero is absolutely stunning. It's got to be one of my favorite pieces so far for this game.
Stone Remembers: A novel in the Wesnoth universe
A-Red's Sprite Art Thread
Top 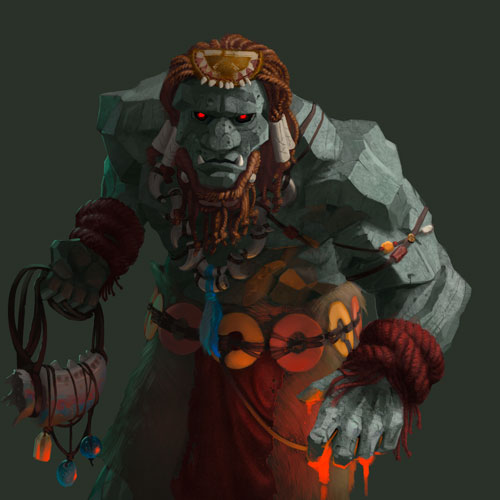 In the meantime, here's the hopefully final shaman. In addition to a couple of things here and there, I've added the ears which had somehow slipped into oblivion.
I've tried to add chiseled flame motives on his arm as an ornament, but I'm not sure it works so well. If not, I'll simply remove them: less is more. 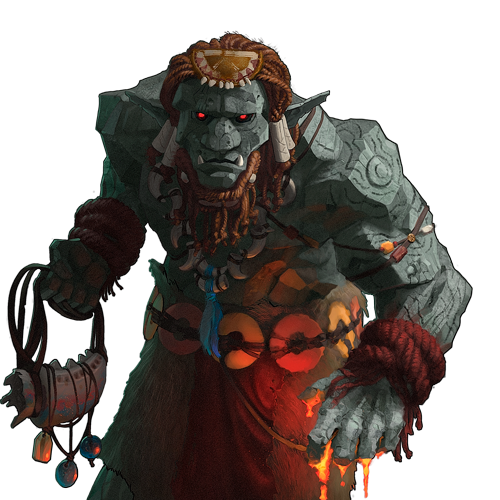 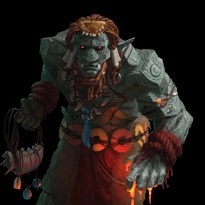 Great to see you back! Been watching with avid interest.

Have to say, this is looking very cool - I'm not sure, though, about the rope dreads, they feel a little out of place to me. I'd also tone down the eyes just a touch, and add some more variation to them. They stand out too much for my liking at the moment.

I have to say, the lava hand looks awesome. However, I wonder about the wrist-rope so near to that fire. Don't you think it would catch and burn up pretty quickly if he's not careful? Perhaps move them to another part of the arm?
When a scientist states that something is possible, he is almost certainly right. When he states that something is impossible, he is very probably wrong.
-Arthur C. Clarke-
Top
Post Reply
684 posts