Just dropping by to say that being very keen to viking culture and such, the facial expressions your dwarves have are absolutely great.

That Thursagan pic is especially fun to look at with his woodlandish appearance and old-drunk face.

Man I love the personality of these dwarves! Easily the most charming characters you've done. Flawless as far as I can tell. Kudos!
Sometimes we must be hurt in order to grow, fail in order to know, lose in order to gain, and sometimes we must have to be broken so we can be whole again...
- Nercy Masayon
Top

Here's a first version for fully shaded Durnstorn.
Notice the crazy eyes : they're based on Zookeper's initial description, however if there's any amount of screen time for a sane Durnstorn, I can easily come up with an alternate. 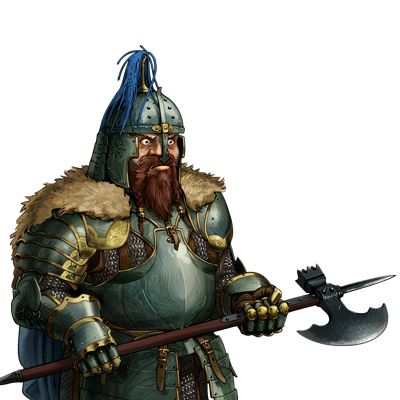 Looks great to me. I'm liking the texture on the chest plate.

The only thing that bothers me is that it seems like the fur on his right (our left) shoulder would scatter more light onto his helmet; it looks like it should be a little brighter near the bottom to me. Since it's shiny metal and it's right next to the fur, maybe even a distinct reflection.
Age of Trials MP Era - Map pack
Top

LordBob wrote:Notice the crazy eyes : they're based on Zookeper's initial description, however if there's any amount of screen time for a sane Durnstorn, I can easily come up with an alternate.

I think that'd be a good idea: the idea is that the ruby gradually corrupts him and makes him more and more insane (even if he never was perfectly sane before), so having him look a bit more normal during the first couple of times you see him would be good.
Top

I think that's a valid point. There seems to be a strong frontal light on the weapon, where the rest of the piece is lit much more from above.
http://thespaceinvader.co.uk | http://thespaceinvader.deviantart.com
Back to work. Current projects: Catching up on commits. Picking Meridia back up. Sprite animations, many and varied.
Top

Mmh, you're right about that. Will post again tonight or tomorrow with a corrected axe and an alternate, peaceful look.
In the meantime, WiP for Rugnur His eyes look really, really bizarre...I'm sure the blackness will be fixed, but what are the black lines coming from them supposed to be?

Also, his left (our right) arm looks in a strange way like it has no elbow, and just bends 90º. I'm not quite sure why my eyes keep telling me this though...
"What do you mean, "a dwarvish dragonguard with marksman is overpowered"?"

Can you make it purple...

I think part of the issue reepurr sees about the axe-arm's elbow is that the leather strap goes around that arm at a different position than on the other, which looks a little strange. A touch more definition of the elbow couldn't hurt either. But overall, I'm really liking Rugnur.

And can you put up a tutorial for how you do chainmail at some point. It looks AWESOME, and I tend to avoid chainmail coifs and things like that because my method doesn't look too good when it's the focus of a pic.
http://thespaceinvader.co.uk | http://thespaceinvader.deviantart.com
Back to work. Current projects: Catching up on commits. Picking Meridia back up. Sprite animations, many and varied.
Top

Before you can see more of the dwarves, here's a WiP for a fire dragon portrait. There happens to be one in sceptre of fire, so I'm hoping this campaign-specific portrait will also make it as generic. It'll be reframed and resized before use of course, but for the time being, a dragon's too good a subject not to draw whole 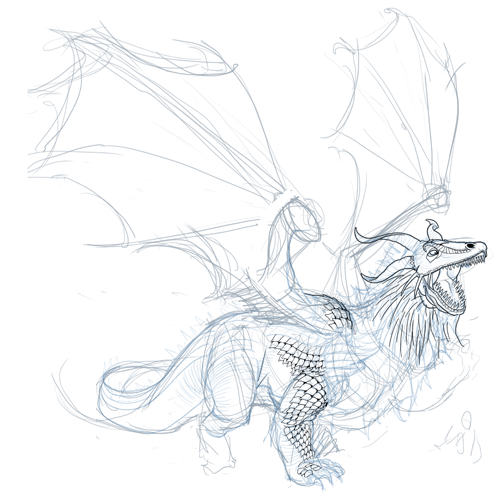 there is usually not too much perspective in wesnoth art, including portraits.
but this time, the dragon being huge, maybe some perspective would make it look cooler?
if i said it looks bit like a model for anatomical study it would be overdone crits, but something in this direction is what i mean.
campaign ruthless in your nearest 1.11 add-on server
some wesnoth-related drawings
Top

(Hopefully it is early enough in the process for me to say this without being a jerk.) To make the dragon look big, wouldn't it help to make him look down on the camera, because he/she/it is talking to roughly human-sized folks? This looks like it would be good for a story image, but I don't see how you could fit it in the same role as the other portraits.
BfW 1.12 supported, but active development only for BfW 1.13/1.14: Bad Moon Rising | Trinity | Archaic Era |
| Abandoned: Tales of the Setting Sun
GitHub link for these projects
Top

The dragon's not so much crocodile as a mix of pangolin and komodo dragon. The idea is to show he has common ancestry with our drakes.

The perspective/looking down thing is a good idea, but in the context of a partial view and no background, it might be difficult for the viewer to understand what he sees. I'll give it a shot, though.

As to this not fulfilling the role of portraits, don't let yourself be abused by its size : you're seeing it at a tenth of its full scale. A cut displaying a huge head and clawed paw that would be bigger than a say a horse would very likely convey size in a proper manner.