Campaign art - The Rise of Wesnoth

Forum rules
Before posting critique in this forum, you must read the following thread:
Post Reply
386 posts

Golden_Soldier wrote:It seems to me that her left pupil is bigger than the other one

First, I don't see a difference. Second, that is just about the most meaningless quibble you could find on a portrait.
UtBS revision spriting.
To The Zeromobile!
Top

I saw a difference once it was pointed out, so I blew it up to take a look.

As you can see, each "pupil" is a 2x2 square with a round border around it. The one on our right has a darker and thicker border (maybe due to shadows?), making it look bigger. It's kind of a nit pick, but it does indeed look a bit "off". It's the sort of thing most people probably wouldn't notice, but can't be unseen after they do spot it.
It's spelled "definitely", not "definately". "Defiantly" is a different word entirely.
Top

Revised Dionli. She did have an iris larger than the other.
I did also a slight change of her mouth, but that's as much of a facelift as she's getting. She's supposed to be a severe and realistic character, plus this is Wesnoth, not Vogue 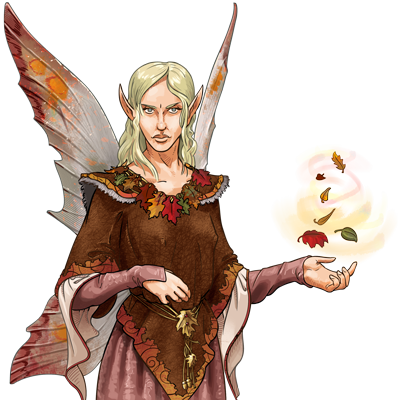 Committed all the finished ones (meaning there's only Jevyan and Rithrandil left) so they'll be in 1.9.2 in case it's tagged today. Hooray!

EDIT: I positioned the Familiar portrait a bit differently in an attempt to make it look better on the dialog box, but I'm not quite sure what's the best way to position flying units like that.

EDIT2: Aaand I managed to mess something up so that in 1.9.2 Haldric's default portrait is never shown, only the expression variants.

Sorry about that. Argh.
Top

I've got the feeling I'm starting all my posts in this thread the same: But you've got so much great new stuff here again!

Regarding the new coloring approach, of course I'm familiar with Moebius but I'm not aware that he used colored hatching, I rather remember black ink hatching on top of soft watercolor shading… Or the ligne claire stuff that I personally prefer. Can you point me to a comic where he worked like you describe? However, what you are doing with it is coming out rather nicely!

The title screen has a great feeling to it, I love how much it looks like a chalk drawing. On the one hand, it is fitting to have Jevyan menacingly in the background, but on the other hand the picture would tell more of a story if the human characters were flipped and facing their opponent. Do you plan to incorporate the title on the picture or will you put it on some extra scroll?

Lord Typhon has a lot of great detail! I know he's committed already but if you are still interested in critique I'd suggest reworking his face a bit. For the face being overshadowed by the helmet, the white of the eyes is extremely light as if they were glowing…Plus the mustache could use some more volume by giving it some highlights apart from where the dropshadow of the nose is cast. And if you want to push his tail even further back, you could simply put the water spray in front of it but behind the upper body.

The new Rithrandil sketch feels very big! I think you could nearly use him as he is, only his face could use a bit more character. Do you plan to give him only eyes and beard or will he get a visible mouth, too?

Wow, all the nagging about Dionil's face is really ridiculous! Her color scheme is beautifully autumnal! There is a slight discrepancy between her anorexic waist/arms/neck and the more chubby face but that's not a real problem.


I hope I didn't miss anything... Can't wait to see how Jevyan will turn out!
Top

and to think im pulling an A in science...

kitty wrote:Regarding the new coloring approach, of course I'm familiar with Moebius but I'm not aware that he used colored hatching, I rather remember black ink hatching on top of soft watercolor shading… Or the ligne claire stuff that I personally prefer. Can you point me to a comic where he worked like you describe?

I don't think you'd find any, it's really the black hatching that inspired me. I've known the work of Moebius for a while (I grew up reading his comics, actually...Gotta love my life

), but it was a visit of his latest exposition that gave the idea. I adapted the hatching into my shading process by using darker or lighter tones of the local colour, but didn't go as far as making it black, as I think it'd be too much different from existing portraits.


Flipping the characters in the title screen might work. I'll give it a try, see if it doesn't change too much the composition.
The idea of the current composition was to show the united people exploring their new land with the underlying threat of Jevyan, but I guess the exploring part isn't all that obvious...

As to the lettering, I think it'll be easier to read the way it is now. Especially since localization will greatly change the position of individual letters. If anything, I'll put it on an extra length of blank scroll, but having it stand on its own is also an option.


I'll post a revised Typhon (the water splashes already are how you describe them : check them against a black background - but maybe not enough so) and maybe some further reworking of Dionli.
Jevyan's underway, in the meantime another sketch for Rithrandil. This one's accounting for the possibility to breach the 500 pixels limit : you're seeing it at its full display size. The idea being that the top branches would be cut where the reach the menu bars 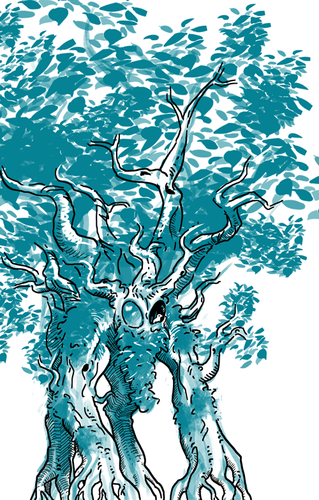 I'd be inclined to join the rear two legs together into a trunk, implying that he's bending over to talk to the short people. Having it be separate legs kind of makes me feel that it would be difficult to mistake him for a tree, which the wose description implies.
http://thespaceinvader.co.uk | http://thespaceinvader.deviantart.com
Back to work. Current projects: Catching up on commits. Picking Meridia back up. Sprite animations, many and varied.
Top

Unless it was so huge that each of the four limbs were tree size? With leaves and branches and stuff on its "belly"?

Undoubtedly too large, but I liked the idea.

The Fires of Pride 0.3, a heavily story based campaign.
On hold while I try and finish my book
Top

I guess that when he'd decide to stand still, he could just join his legs together, and with the rugged bark texture and all, it would just look like a single trunk, unless examined closely and carefully? Same goes for the arms, unless they are made to be branches instead of "roots". Then again, every wose can be a bit unique in its anatomy, I guess, so some could be like this portraits, others could have branch-arms... Hell, why even restrain them to only two "arms", if he has 6 "main" branches, they could all make do, I guess?
Jazz is not dead, it just smells funny - Frank Zappa
Current projects: Internet meme Era, The Settlers of Wesnoth
Top

) are they made of amber/sap? if closed maybe they would look like knots
Top

The idea is indeed to have amber-like eyes.
Incidentally I have another wose portrait planned (for Delfador's Memoirs, this time), which should allow to experiment with two very different sets of anatomy. Rithrandil will receive trunk-like arms, while his kin will get branch arms in a frightening number 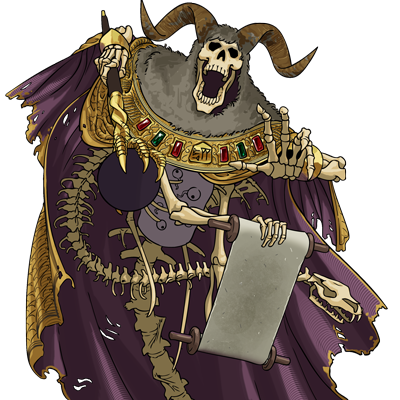