Forum rules
Before posting critique in this forum, you must read the following thread:
Post Reply
214 posts

Err... so is he a living rock creature like a golem/elemental, or does he have a hard rocky exoskeleton of sorts on top of muscle, organs, etc.? I don't think we've hammered out troll anatomy yet.

And if trolls regenerate, then how would the carvings persist?
It's spelled "definitely", not "definately". "Defiantly" is a different word entirely.
Top

johndh wrote:And if trolls regenerate, then how would the carvings persist?

Well, they regeneration might be imperfect. They regenerate enought to function normally, but scars persist. Or maybe the regenerated parts look a bit different...
ride on shooting star
Top

I'm not ready yet to delve into troll innards, but I'd rather go for the exoskeleton with some sort of living stuff inside. As far as regeneration goes now, my take on the carvings would be that they're superficial and as such not harmful enough to be perceived by their organism like an injury. Pretty much like cutting through dead skin doesn't set off healing in a human body.
Top

Getting bit offtopic, but is there a troll discussion somewhere?
Because I perceive this stone exoskeleton armor as dangerous and would like to voice my opinion properly there with all the flames and sparks and stuff.
Living solid stone statues that move by distorting time and space would create less contradictions than exoskeletons.
Otherwise we would probably get to flesh "trolls" with small stones glued to their skin and your portrait would become useless

My vote goes to the first tattoo.
edit: it looks like a map of the troll domain, which might be fitting in the case of a great troll.
Last edited by homunculus on June 2nd, 2011, 12:35 pm, edited 1 time in total.
campaign ruthless in your nearest 1.11 add-on server
some wesnoth-related drawings
Top

homunculus wrote:Otherwise we would probably get to flesh "trolls" with small stones glued to their skin and your portrait would become useless

homunculus wrote:Otherwise we would probably get to flesh "trolls" with small stones glued to their skin and your portrait would become useless :wink:

Cosign. But written crap can provide consistency across portraits, story images & sprite animations. As for the tattoos, I believe the first of three is too synthetic-looking. The third is cartooney, maybe that's OK. If I were you (and I'm ... not ...) I'd put the tattoos in the shading only, no lines. Painterly, not patterned.

In other words, I think you could pull it off beautifully if you didn't think about it too much.
BfW 1.12 supported, but active development only for BfW 1.13/1.14: Bad Moon Rising | Trinity | Archaic Era |
| Abandoned: Tales of the Setting Sun
GitHub link for these projects
Top

homunculus wrote: Getting bit offtopic, but is there a troll discussion somewhere?

There is now.
It's spelled "definitely", not "definately". "Defiantly" is a different word entirely.
Top

I love all the detail you put on him!

About the carvings - I still like the idea very, very much but those don't work too well yet, the first version feels too fine and precise for trolls and the last one is rather hard to make out... Someone suggested filling the carvings with paint, I'm thinking about something along the lines of Nuba body painting (you know the famous Leni Riefenstahl photographs?) perhaps. But after some experimenting I've got the impression that paint-filled carvings make the coloured lines more important than the carvings themselves easily - what do you think? 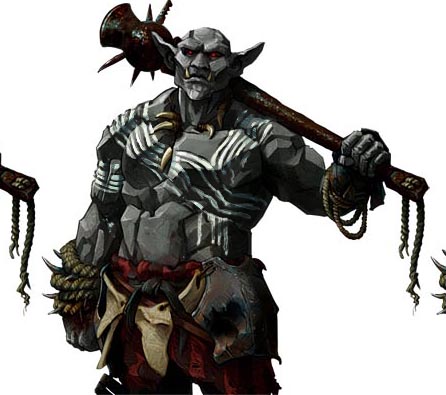 kitty wrote:But after some experimenting I've got the impression that paint-filled carvings make the coloured lines more important than the carvings themselves easily - what do you think?

I think that looks incredibly cool - a truly fresh interpretation on body markings. But then, I suspect you were asking LordBob.

The way I imagine trolls "beauty" marks is as rudimentary as the ones in Lord of the Rings Uruk-hais.
They contrast well with the body colour, are rude while maintaining the mood / theme, and are cool to the eye (at least mine).

), but since the pictures are coming out so

Edit: Forgot to mention, about their cloths trolls must have some skills with their hands and some degree of intelligence to use those skills, or how would they make those weapons. The tree trunks I get, but where can someone salvage that mace-like-thing with blades on the top?
So give trolls some credit

I've given this some thought: So expect nuba-style body paintings for the final result, no carving. More coming shortly.

Oh, and the mace is really simple: you remove the clapper of a large bell - plenty of which could likely be found in abandonned human villages/ransacked cities, then ask your average orc smith to hammer some spikes into it, and voilà: a huge mace of solid iron that none save a troll can lift, with garanteed leathality on impact

i like where it is going! the eyes and skin are really different from other races which emphasizes they are not made the same way.

<aside>would love for troll warriors to add the piercing damage type based on the spiked club idea, if it is possible</aside>
Top

tr0ll wrote:<aside>would love for troll warriors to add the piercing damage type based on the spiked club idea, if it is possible</aside>

Damage types aren't purely about the mechanics of wounding; they're also about maneuverability, and ease of striking sound blows in combat. Cavalry aren't vulnerable against spears in wesnoth because of any unusual vulnerability of a horse against a spear; horses are just as badly damaged by a sword. Cavalry get additional damage against spears because it's easier to strike a mortal blow against a horse with a spear, than it is with a sword.

If wesnoth was a realtime game, horsemen wouldn't take any more damage from spears than anything else. However, a wall of spears would have double or triple the reach of their cavalry swords, would be able to physically repel their large bodies from closing in to do damage to the spearmen, and would have a decent change of dealing mortal blows rather than just lacerating the horse. By contrast, a heavily armored (full plate) swordsman would have a high chance of sliding through (wedging his way into) the wall of spears without getting injured, and once past the line of spears, would be able to hack away at the spearmen with impunity (presumably, the spearmen might have a minimum range in addition to a maximum), making them useless unless in large groups.

We don't do this stuff; we try to oversimplify the simulation so we can have a clear, simple game that doesn't take forever to play. Simply speaking, all of the above that I described would be extremely difficult to implement in a turn-based, tile-based game, and most of the ways I can think of would explode the time it would take to play a single game. That's why we don't do it.
Play Frogatto & Friends - a finished, open-source adventure game!
Top

ah yes, keep it simple. agreed.
in most cases the impact damage would dwarf the piercing damage anyway. i guess i was thinking of the cases where a target has very high impact resistance and/or negative piercing resistance, for example a hypothetical balloon monster

, those relatively small spikes would be crucial. however, this is where having goblin or saurian or orc friends comes in handy

And back to the topic at hand, here comes the finished version of the great troll, complete with lineart and all.
In addition to paint markings, I've done extra rock texture and cracks in order to tone down the comics aspect.
I'll try and include more rocky features in early sketches for future trolls, so that their final appearance improves.

Next random portraits will be the troll shaman and troll warrior, at which point we'll have a complete series. 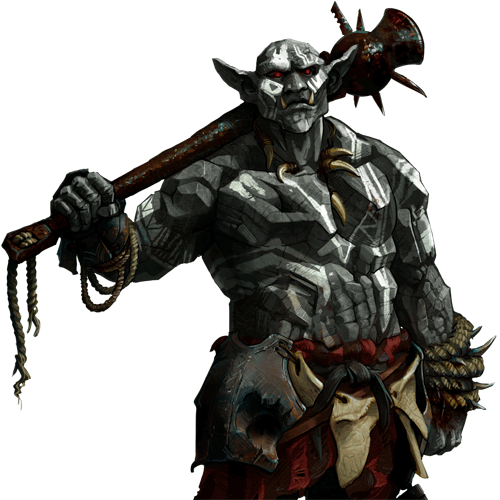