Forum rules
Before posting critique in this forum, you must read the following thread:
Post Reply
83 posts

Drawing waterfalls has made me a bit obsessed with the underground. While taking breaks from waterfalls, I've been playing with a few other things.
One was realigning all the dwarven castle tiles with the cave wall. They're about 4px off vertically in the game, though you don't tend to notice unless it's against a bright background like grass or water. That's over in another thread.

That made me realize how easy it is to add cave walls to castles, so I've also pasted together this: 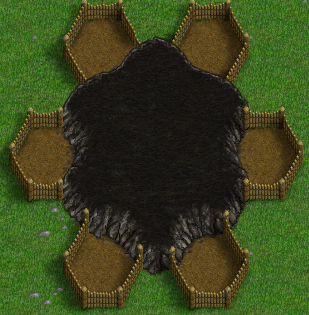 Any way it can be improved? The extra thick post on one of the diagonals is unavoidable without redrawing the original camp tiles: some of the walls are in different places depending on which way the wall goes in the next tile and the macro doesn't account for tiles that far away.

My current project for when I don't want to draw waterfalls is tracks for mine carts, though I supposed they could be used as a railway for a more modern setting.

Anyway, the first image is a shaded example, while the second is a layout for the rails and ties. Comments and criticism is more than welcome.

2nd Edit: Realized I forgot to post the pngs of the encampment. They're now attached. For those who want to use them, place the unzipped files in "images/terrain/castle" and add the following line to terrain-graphics.cfg or any suitable campaign file.

Right now the vertical sections seem thinner than the diagonal ones - it should be the other way round because of perspective. Otherwise promising.
Top

Most of that is shading I hope, since I think the vertical rails are actually wider right now. I've attached an example that is unshaded to check if it is only that the shaded one is darker or if it's a real problem.

The difference is pretty large - but the view of wesnoth terrain is not top-down, it's under an angle (the angle is not really consistent, but it should still never be top-down), so the currently wider section should be thinner than the thin section instead. (or the currently thin section wider than the wide section)
Top

Ah, I see now. I thought you were talking about the individual rails.
Since I probably can't make the n-s one wider without running against the edge of the tile (I'd only make it to 1px wider than the diagonal if I went to the very edge), I'll have to make the diagonals much smaller. Thank you very much.
Top

A top-down perspective isn't really going to work. Check out the comments about that in this thread.
Top

Okay, taking everything into consideration and doing some math based on mesilliac's excellent thread, I have a new image for the shape of the diagonal. Did I get everything?

Mathematical reshaping of vertical track should get one on left before shading.
rails shape.png (39.13 KiB) Viewed 3828 times

Looks fairly close to me.

Tracks have more than just wood and steel though. They're laid on something, which is most often a pile of gravel.
Setanesh Faction! -|- Setanesh Art!
Top

Cool. Will you be doing the code soon? I may be able to use that for a campaign.

This is looking good. I've always wanted more terrain in Wesnoth, and you're really making me happy.

THe only thing that I see is that the wood might be a bit dark, but that's just my opinion.

Why not just do it yourself? Just code it as an overlay; it's not nearly as hard as coding, say, the cave walls or terrain transitions.
"I'm never wrong. One time I thought I was wrong, but I was mistaken."
Top

Once again, this is highly promising work. Assuming they're code-compatible, I see no reason why your cave-camp transitions shouldn't be committed to mainline immediately*. And mining tracks will be useful in adding further visual interest to underground maps, which currently tend towards uniform grey and black.

Since the work you're doing here is a strong candidate for mainline inclusion, I'm going to move the thread. In the future, please feel free to create terrain projects in the Art Contributions forum; this way they can attract more attention from skilled artists and developers. While Blarumyrran clearly wanders the Art Workshop with some regularity, many of the key artists don't.

* I am not an Art Developer, just a Moderator. An experienced artist or coder might spot a problem that needs resolving before the commitment of new tiles.
"Pure logic is the ruin of the spirit." - Antoine de Saint-Exupéry
Top

Did somebody ask for a mine-car?

dipseydoodle and artistic dude: I write the code to display all the art I'm doing as I create the it. When I post the PNGs, I'll include a WML file that will display them (though if this gets accepted into mainline, the final code may well be different).

Also, I'll post the flat images when they're all done; that way, anyone who wants different looking rails can draw their own over top without having to do all the math I did to make these conform to perspective properly (the inner curve on n-nw bends follows an ellipse with a major axis of 130px and a minor axis of 87px for example).

Sangel, I'm not completely crazy. This, and everything else I've posted, is for a campaign I'm creating. I'd post it in the campaign development forum (there's 6 playable scenarios so far), but it includes some other art that I want to work on more before I'm ready to show it to anyone.

And while I'm answering people: Issyl, you can put the rails over any terrain. If you want gravel, just use cave floor, one of the cobbled roads, or something of your own creation.

Just to show where I am at the moment, here's a current screen shot, on sand for variety. 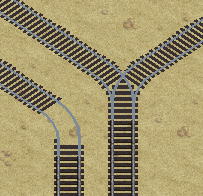 If you can use the mine car in anyway, please do. I probably will use it in my campaign(whenever I start it) but I really don't care about that.

EDIT: The sand rails look great. Is there a reason some of it is missing the shading?
- Dipsey
Top

I would say the vertical tracks still look like we are looking at them from above.

I'm not sure how you would fix this though.
Setanesh Faction! -|- Setanesh Art!
Top
Post Reply
83 posts