Forum rules
Before posting critique in this forum, you must read the following thread:
Post Reply
112 posts

Hello to everbody, i worked on Infantry Lieutenant and Infantry commander of South Guard campaign. jetrel suggest to upload them because the current sprites are frankensteiner style. I'm think it's a great job

, but as always, need and appreciate your approval and suggested. Observe that while the Infantry Lieutenant holds a position more or less static, as most of the sprites of the main line, the second is a dynamic position standing sprite (raising his glaive, demonstrating leadership), like many the warhammer miniatures. I think this opens up an interesting debate about whether "standing sprites" must to be static or not. A similar debate on whether functionality is above the aesthetics. Time for your replies! 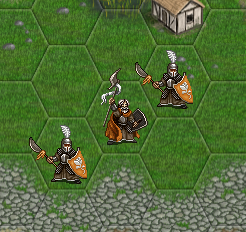 Close enough for my money. I'd be happy to see more dynamic poses, to be honest with you. I'm trying to work them in to some of my newer work, actually.

Two major things strike me: they fit the style quite nicely, but don't really share the look of the loyalist units they will appear alongside - matching colours, symbols (the loyalist symbol is the Sceptre of Fire) and general gear style (in particular, the robes are somewhat out of place for loyalist soldiery) would be good. And obviously, the orange bits will need to be team coloured.

A few other niggles strike, but can be ironed out as we go.

rhyging5 wrote:Hello to everbody, i worked on Infantry Lieutenant and Infantry commander of South Guard campaign. jetrel suggest to upload them because the current sprites are frankensteiner style. I'm think it's a great job

, but as always, need and appreciate your approval and suggested. Observe that while the Infantry Lieutenant holds a position more or less static, as most of the sprites of the main line, the second is a dynamic position standing sprite (raising his glaive, demonstrating leadership), like many the warhammer miniatures. I think this opens up an interesting debate about whether "standing sprites" must to be static or not. A similar debate on whether functionality is above the aesthetics. Time for your replies!

Well, first of all, even though the quality looks really good, the style is pretty different. The colours are pretty simple, basically just gray for the armour and rather desaturated brown, which doesn't seem to be the kind shared by other human units, for the clothing, and to top that off even his hair is gray. I'm assuming the cape and shield would be TC'd. All the loyalist units except the HI line have more different colours in them, such as the blueish armour and some gold linings. On first glance these guys look like they belong in a different culture, not the Wesnoth army.

As far as I'm concerned, very dynamic poses are a bit distracting. That's what we have animations for; if it's a Warhammer figure or something, then you're never going to see anything but the "standing frame" so you might just as well make it as dynamic as you want, but in Wesnoth these units will be at least attacking, defending and leading as well. Not to mention that it's simply more work to make a dynamic standing frame like that work with animations. You can't have them go back to that pose between hitting and defending for example, or it'll just look silly if he's sticking his glaive up at every opportunity - you'd have to make a neutral non-dynamic frame for those purposes anyway. So I'd suggest simply leaving the dynamic poses like that for example for leading animations.

As for the actual sprites except the colours...well, the shield is huge, and as such also doesn't exactly strike me as a Wesnothian shield based on what kind of shields the other units have. The skirt also seems a bit odd, but it doesn't really bother me much. It just gives it a bit more of that feeling that he's not using any kind of usual Wesnothian gear.
Top

I think they're awesome, and as tsi said, close enough to the style.

Regarding the dynamic pose--it's nice to see something that isn't static, but on the other hand the unit has a leadership ability, and therefore will have a leadership *animation*, and the pose you've created might be better used in that animation.

Regarding colors--it does look a little monochromatic because of the orange you've used, but I presume you're going to be changing that to team color? Shouldn't be a problem in that case.
Stone Remembers: A novel in the Wesnoth universe
A-Red's Sprite Art Thread
Top

I tried recoloring it with the basic Loyalist shiny-armor pallete. All I can say is, how many shades of the same color do you have on there? Gee.
UtBS revision spriting.
To The Zeromobile!
Top

I really like the sprites, but I have to say that I'm a bit confused - the style is completely different than mainline Wesnoth army units. It's like he's from a completely different culture. (Technically, this could be the case because of the intervening years or the distance, but then all the units from TSG would have to be redone to match.)

Even if the style is accepted, though, the lieutenant is a bit too large. I've compared him to the Grand Marshal - a level 4 unit - and the lieutenant is visibly larger - though his build is also rather different, I think because of the difference in their gear.
Top

First of all, in general terms, these look GREAT!

I'm not too worried about them matching the game; probably changing a few bits of equipment up could make it fit better. The weapon and cape match the style perfectly; the shield shape doesn't, but if you took the bottom point of the shield, and changed it's shape to match the top (a rectangular tower shield, rather than a kite shield), I think that would remove the biggest source of disconnect. The symbol on the shield is fine, I think it works great for a unique character.

The draping war-skirt is unusual, but it's nothing too different from what the mages wear. It does correctly make the unit seem to be wearing full chain, which suits it. You could try something like the blue palette of our loyalists for the metal, and see how it works, but if it doesn't, the current palette is fine.

As for size, it's a smidge on the large size, but heroic-scale units are alright for a campaign hero. You could maybe tone it down a bit for the level-one, but what you have is a perfect size for a L2.


rhyging5 wrote: the second is a dynamic position standing sprite (raising his glaive, demonstrating leadership), like many the warhammer miniatures. I think this opens up an interesting debate about whether "standing sprites" must to be static or not. A similar debate on whether functionality is above the aesthetics. Time for your replies!

Most of our units are a little behind our current standard for leadership animations; the orc leader line is up to date and is a good example. The animation is two frames; one key frame of the unit fully-extending its weapon in an "epic leader" pose; the other is an inbetween frame between that and the base frame.
Play Frogatto & Friends - a finished, open-source adventure game!
Top

hello! it is clear that i took too much creative freedom, forgetting the style of Loyalist equipment. The good news is that changing the colors is very easy. Change the equipment will not be much. Regarding the symbol of the shield, given that one already exists for Loyalist would be good to use it ..... and save the white rose for others in the future, no?

hello to everybody, returning to the task of matching the style of uploading units, this is the state which theses are.......need replies..... 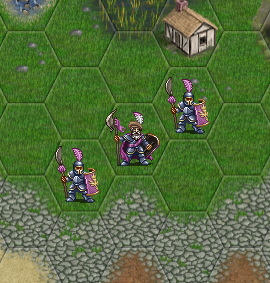 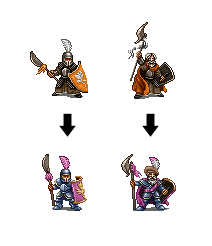 Looks really good. The shield especially is very nice. The only things which to me still seem worth especially working on is the hat and face of the lvl3 version. First of all, the beard makes him look like he's pretty old, whereas I've gotten the impression that Gerrick would be middle-aged at best (of course we could change that if really necessary). The hat on the other hand seems more like what an aristocrat might wear (like the fencer line for instance), whereas I've always imagined him to be more like a grizzly veteran than a noble.

The pole of the glaive could also use some sort of anti-aliasing, I'd expect Jetrel to have something to say about that.
Top

Great work again. I especially love how you managed to fit such a detailed design onto the shield and made it clear that it's in relief. I think the back edge on the L2 shield curls around too far--it almost makes it look like the shield has been bent in the middle. I agree that the hat and possibly the white beard should be changed. Right now it feels like a bit too much of a stretch from the character portrayed in the campaign. Maybe I'm just used to the current sprite, but like zookeeper said, I think he's grittier than what you've got.
Stone Remembers: A novel in the Wesnoth universe
A-Red's Sprite Art Thread
Top

Also, bear in mind that TC is not just pink - it's these colours, and these *only* - what you've done just looks generically pink/purple.

Also, I can't help but feel that the level progression in terms of armour ought to go the other way - the helm should be on the higher level.
http://thespaceinvader.co.uk | http://thespaceinvader.deviantart.com
Back to work. Current projects: Catching up on commits. Picking Meridia back up. Sprite animations, many and varied.
Top

thespaceinvader wrote:Also, I can't help but feel that the level progression in terms of armour ought to go the other way - the helm should be on the higher level.

Not necessarily. This is more a case of stormtrooper vs. charismatic commander, than a simple upgrade of gear, I think.
ride on shooting star
Top