Forum rules
Before posting critique in this forum, you must read the following thread:
Post Reply
104 posts

Deusite wrote:Magic' scripts are generally much more formal and ceremonial i.e. not for mere mortals so it's natural to adopt a simplified version for general use, especially if the script is very old and as a result possibly very complicated. The general gist I'm getting is that the first script was magical, so using that same script to create one for the commoners at large makes sense to me.

Eh, it could go either way depending on how you look at it, but I talked with melinath via IRC and he's going to try a few things.
Mainline Maintainer: AOI, DM, NR, TB and THoT.
UMC Maintainer: Forward They Cried, A Few Logs, A Few More Logs, Start of the War, and Battle Against Time
Top

Glad you like it, TSI! I will be adding the thickness to the signpost soon. First I wanted to do a test of the writing.

I made a more simplified version of the script

I know I need to redo the lighting. This was just a rough fill-in so I could gametest it without it looking too wonky. (I also need to make the letters engraved.)
Last edited by melinath on July 10th, 2009, 6:21 pm, edited 1 time in total.
Top

I'd definitely re-orient and/or re-light it so that the written face is lit, rather than shadowed.

Great work on the scripting, I like where it is going. I was about to comment that it looks very flat, but then I saw that you are going to redo the lighting and shading and all that. Keep up the good work.
Mainline Maintainer: AOI, DM, NR, TB and THoT.
UMC Maintainer: Forward They Cried, A Few Logs, A Few More Logs, Start of the War, and Battle Against Time
Top

For reasons of readability, the wood splits have been removed. I might add them back in later... we'll see.

Here's a new version, now with shading, a three dimensional sign, carved-in words, drop shadows, and attempts at texturing wood... if anyone has any suggestions on texturing wood, that would be great. I'm not satisfied with it. And of course any other critique would also be welcome.

P.S. Ten points to the first person to figure out what it actually says.

Unfortunately, the last two letters don't exist in Ugaritic, so I had to improvise. EDIT:: Also, I just noticed the second-to-last letter is just plain wrong... oh, well. 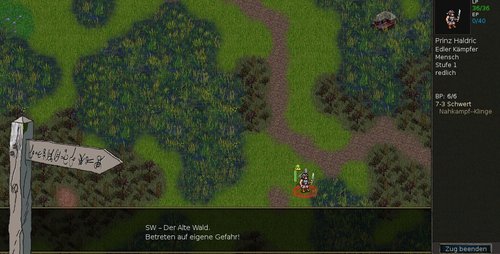 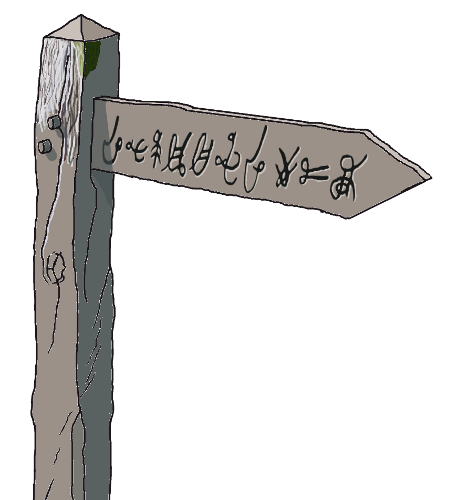 Hmm, may I say one thing about the signpost?

As it is drawn atm it looks to me as it was pointing into a direction behind me, so it seems that it is pointing to somewhere I came. Wouldn't it be better to rotate the image, so that the sign post would actually point to somewhere ahead of the viewer? That is some northeastern/northwestern direction? (or some 2 or 11 o'clock if you prefer this notation)

Just an idea.
ThanatoNoth | Necromanteion | Undead Rights Protection Society
"The gods can demand nothing of me. Even gods answer to me, eventually. [...] I cannot be bidden, I cannot be forced. I will do only that which I know to be right." (Death in Pratchett's "Mort")
Top

Hmmm.... interesting thought. I'd be inclined not to change it, in large part because of my natural laziness, but also because the angle doesn't really matter. The signpost just needs to be readable, and it's readable from a number of angles. This angle is convenient because perspective makes the sign get bigger + thus more legible. But mostly I'm lazy... if someone else also thinks this would be better changed, I might do it.

Please post any critique before trying to figure it out. And it's really not that impressive of an easter egg, anyway.
Top

If you're not going to change the direction (i'd say that the pointing away option would be slightly better, but not significantly), at least change the perspective so we're seeing the board from slightly underneath, rather than slightly above, since the slightly top-down perspective makes the post look very short...
http://thespaceinvader.co.uk | http://thespaceinvader.deviantart.com
Back to work. Current projects: Catching up on commits. Picking Meridia back up. Sprite animations, many and varied.
Top

melinath wrote:Also, if you're trying to figure out what the word is, here's a few corrections: (trust me, you need them.)
1. I accidentally didn't copy the zeta-equivalent onto my newest script jpg.
2. the 5th letter is supposed to be a w. I was off by one letter.
3. the second to last letter is also wrong. It was supposed to be a '. I was off by one letter.

Please post any critique before trying to figure it out. And it's really not that impressive of an easter egg, anyway.

From someone who spent 28 minutes trying to figure it out, good luck. It's a code within a code, and I will be surprised if anyone else gets it, as melinath had to walk me through the word itself at the end (Granted, I was the one who spent the time discovering the above errors).
Mainline Maintainer: AOI, DM, NR, TB and THoT.
UMC Maintainer: Forward They Cried, A Few Logs, A Few More Logs, Start of the War, and Battle Against Time
Top

Here's a new version with changed perspective and the sign pointing away. Which crop do you like better? 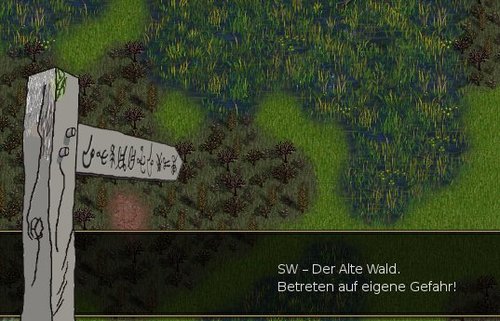 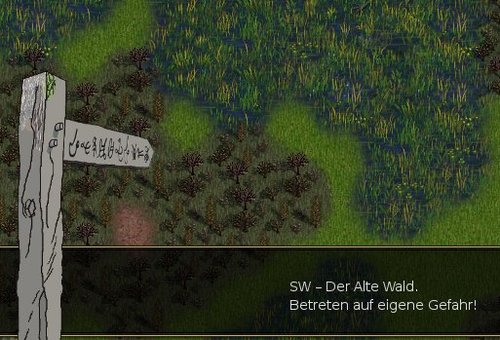 Bingo. And the second crop is better, i think. Just needs some nice treatment for the shading, and you're there i think.
http://thespaceinvader.co.uk | http://thespaceinvader.deviantart.com
Back to work. Current projects: Catching up on commits. Picking Meridia back up. Sprite animations, many and varied.
Top

Yeah, the perspective is much better now. A way more natural feeling to me.
I agree that the second crop is the better one. It makes the signpost look taller - and normally they are at least the height of a tall man.

The screenshot is no proof. Maybe, melinath is just multilingual, and likes to play in german language to teach himself/herself.

hmm, the closest i can get to what it says is: Tzhuwztsat
im guessign thats not it though...
CountPenguin

I feel so mysterious...
That's actually pretty close, CP. Part of the puzzle is figuring out what it means once you've got it. But you haven't got all the letters right, yet.

Anyway, here's an attempt at shading/texturing. I've tried different things on the post and the sign itself... what looks better? 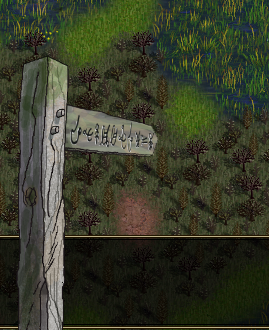