Forum rules
Before posting critique in this forum, you must read the following thread:
Post Reply
38 posts

Rogue Mage - Shadow Mage - Shadow Lord; For Liberty. (some other content, including some version of Bob's empire builder and its derivatives, use them too)
Last edited by Blarumyrran on January 8th, 2013, 9:27 am, edited 1 time in total.
Top

They look nice, but the way the lvl 2's cape sticks out looks weird like it's a sheet of metal or something. Otherwise good.
The Era of Myths
The "How to Play..." series
Second draft.
Top

The sprites aren't bad, but they don't really look like magic users to me. Also, their swords look more like daggers or large knives.
Campaigns: Dead Water,
The Founding of Borstep,
Secrets of the Ancients,
and WML Guide
Top

beetlenaut wrote:The sprites aren't bad, but they don't really look like magic users to me. Also, their swords look more like daggers or large knives.

The old Shadow Mage didn't really look "magic user-ey" to me either. If I recall the imagery right these guys are meant to be more outlaw than mage, with none of the cultish trappings of the mainline multiplayer Dark Adepts.

I agree the swords aren't long enough, and the Shadow Mage's cloak should have fallen, not stuck out like that. Admittedly decent swords are an expensive luxury for an outlaw, but these guys were once lawful magi; they're going to have been fairly loaded guys who opened the wrong book, not poverty-stricken foundlings taught death magic by a master of foul sorcery.

Overall though, these easily meet the excellent standard I've got used to in mainline sprites, and I look forward to seeing them animated! (And the L2's cloak fixed. Seriously.)
Shameless Crossover Excuse
Necromancer (campaign)

You are a Dwarvish Berserker: you're freaking crazy and enjoy it.
Top

Syntax_Error wrote:Rogue Mage - Shadow Mage - Shadow Lord; For Liberty. (some other content, including some version of Bob's empire builder and its derivatives, use them too)

beetlenaut wrote:The sprites aren't bad, but they don't really look like magic users to me.

The lvl1 has got a slightly higher-damage melee attack (5-3) than magic ranged (7-2); lvl2 has equal damage, (6-3) vs (9-2); so the melee weapon is relevant enough to be shown in hand. The magic attack doesnt need visible armament as much; both lvl1 adept & mage have scarfs, so having one suggests wizardry enough for me. The lvl3 did look too heavily armored, fixed it somewhat.

The sword is fully copied from mainline Cavalry (for consistency; i dont really like how wesnothian sprite swords look, but everyone doing his own thing would break consistency, so copying is better), and on Cavalry its supposed to be a short sword, so if it works there, it should work here. A bigger sword would imply higher damage, but even lvl2 Shadow Mage has only the damage as lvl1 Cavalry (6-3).

This looks (generally) really, really good, except for a small issue in the bodily balance of how these guys are standing. They look like they're about to fall over backwards. I've attached a tweak. I think your inherent sense of balance right now is off, so please don't unfix what I just fixed. I hate it when people do that - trust me on this.

Please do animate these - I'd LOVE to have these replace the in-game unit. These are also really good, btw.


Syntax_Error wrote:The sword is fully copied from mainline Cavalry (for consistency; i dont really like how wesnothian sprite swords look, but everyone doing his own thing would break consistency, so copying is better), and on Cavalry its supposed to be a short sword, so if it works there, it should work here. A bigger sword would imply higher damage, but even lvl2 Shadow Mage has only the damage as lvl1 Cavalry (6-3).

NO NO NO NO NO. Don't think that way. It's absolutely myopic nerdery; trying to ram everything into following a strict set of rules. A bigger sword doesn't imply higher damage; it just implies "hey, a bigger sword looked better on this unit". Just make the sword whatever size looks right, on a unit by unit basis. It needs to match the composition of the unit it's on. That is by far the most important criterion. Otherwise you'll end up with a bunch of images that follow some (useless) criterion, but all look crappy.

The criterion is only useful if they make stuff look better. They don't, here, so don't follow them. Also the cavalry sword is due to be fixed, later. 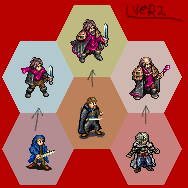 I love those really much!

I have nothing else to say, expect that the first one is a bit funny to me, because of the wide leg positioning.
Check out my sprites!
Top

Their capes still look off to me. All 3 of them now. I don't know how the lvl 3 tweak could be possible unless it is a lot longer in the back (allowing it to flow and stretch as far back as it does with the front hanging straight at the same length). The shading on the lvl 2 cape along the new fold should be accentuated more to lose its still flat feeling, and I now find myself wonderingif the lvl 1 has a tiny arm because we cannot see it.

The sword change looks better though. Sorry if this reads too critically.

these sprites look good - much better than the other ones - but the heads seem too small to me, and the swords really look short.
I'm not really around any more, but you can find me in TvTropes.
Top

Not sure what will happen to this as the post before yours was eight months ago. Might get this forum locked but seeing as it is still yet to be completed…
Latin:LVDVMAMISI (pronounced Loo-dum amee-C)
French: J'ai perdu le jeu.
English: I lost the game.
Top

I left it reasonably well alone because someone has recently been working on these in another thread. So no worries, but I wouldn't expect anything to be happening about it here.
http://thespaceinvader.co.uk | http://thespaceinvader.deviantart.com
Back to work. Current projects: Catching up on commits. Picking Meridia back up. Sprite animations, many and varied.
Top

Committed! I used the versions in Jetrel's post and added shadows.
Top

Has it been 3,5 years already? Doesn't feel like it! Anyway I'm coming back to it, because:

1 ) IIRC the entire reason I made these, was because I was doodling, and happened upon the green-to-pink coppery metallic color, and tried to incorporate it into some unit that could be pushed mainline; someone (mysticx?) said back then that the metal... things don't make any sense in the context & I had to agree; the sprites were very loosely fitted for the purpose of the unit type.
2 ) I think Jetryl's tweak was idiotic (as was the entirety of his patronizing comment. I don't think there's another post on this forum that has made me hate the wesnoth community (or the mentality (or lack of it) behind the design of wesnoth) as much as that post)
3 ) I've gotten a lot better in general, eg at rendering hair
4 ) Someone in the Ark Workshop forums said he was trying to animate these & create female versions; the more dependent assets (like animations & female versions for a sprite) there are for an asset, the more cemented that asset becomes & I'd rather not see the current sprites cemented.
5 ) I have (not too hopeful) hopes that these units might be pushed to Core (from Liberty campaign, where they reside currently) some day; better sprites can help with that.
6 ) Kitty has made a portrait for Helicrom (a Shadow Lord in Liberty), the sprites could relate to it more.
7 ) Level3 should not have a staff
8 ) The cloaks feel too rigid
9 ) The faces aren't expressive at all; almost all faces on Wesnoth sprites are like that, much uglier & less expressive than the pixels would allow; hopefully it will get better in time - repairing these is a step towards that
10 ) There aren't any accessories on the level 1 & 2 that would strongly identity them as magic users; level 1 looks more like a roguish character & level2 looks more like a fighter; I'm going for scrolls/books now
11 ) The sword positions are very rigid, uncomfortable & boring
12 ) level2 flavor text mentions that the occupation harms health (perhaps like Dark Adept's does), level3 flavor text mentions that the occupation often drives insane. Flavor-wise I really like that - I like to think that Rogue Mage & upgrades are really quite aimless/indecisive/wimpy, even though they don't think themselves to be - they pay most of the price for practicing the dark arts (having to hide from authorities, losing health, not having powerful fiery attacks that mages get, not having the prestigious & well-paid advisory positions that mages get), but are too wimpy (& too attached to human civilization, to the point of desperation where they'd rather mix with common criminal scum) to go all the way into the dark & reap the greatest benefits of it (undead minions, immortality); that would explain why they are so rare (in mainline only found in one secluded forest in one campaign; perhaps the entire unit was meant for that particular community, but I like to think of the unit type as general, so that any character taking a similar path would convergently end up with similar abilities). So higher levels of them could look less healthy.
13 ) I have always hated the way legs/boots look like in wesnoth; now I made a pair of legs/boots that's reasonably compliant with Wesnoth yet looks much better.
Top

As I already said, I'd lose the beret from the lvl3, but other than that these look pretty neat.
Top
Post Reply
38 posts