Ideas for a UI facelift

Forum rules
Before posting critique in this forum, you must read the following thread:
Post Reply
124 posts

Really nice. Decorative but not irritating.
I like that stuff.

As no one seems to have found anything glaringly wrong with the window graphics, I'm going to leave them be for now and move on to the main interface (i.e. top/sidebar). Not sure what to do yet though.
mattiaswestlund.net • Facebook • Soundcloud • Bandcamp • Youtube
Top

We really need to convince Mordante/SkeletonCrew to implement full support for this shiny stuff ASAP.

the borders are a bit expensive in terms of space needed, but this really looks great.

i wonder if there's some free tool that could be (mis)used to design the new ui. something that let's you place rectangles, assign certain values, (maybe also define relationship) - and converting this to wml afterwards. doing this manually is really boring.
Top

A ~24 px window border might be excessive for a normal OS interface theme, but for a game, no. It's not like you have to fit several ingame windows on the screen anyway, they only show up one at a time. Besides, Wesnoth is not a demanding game. You can easily up your resolution a notch if you think things look cramped.
mattiaswestlund.net • Facebook • Soundcloud • Bandcamp • Youtube
Top

The querstion now is not IF it will go into mainline, but WHEN. When this comes out, I'm going to be one of the first in line.

You devs are simply amazing.
Ehhhh... don't mind me, I'm just the annoying little modder who gets on peoples nerves. I'll just lurk till Someone says my name. :P

As no one seems to have found anything glaringly wrong with the window graphics, I'm going to leave them be for now and move on to the main interface (i.e. top/sidebar). Not sure what to do yet though.

Yeah, the current iteration of the windows is looking great.

I look forward to whatever the the next item on the list is.
Play Frogatto & Friends - a finished, open-source adventure game!
Top

What happened to this project? Some amazing stuff was happening here, and I hope that this project will soon resume!
I'm finally admitting that this will be a very long (if not permanent) Wesbreak. Thank y'all for the great times, and may Wesnoth rise to become one of the most popular games on the planet.
Top

Yeah! I was really hoping to see this done.

I love that emote

Really sets the tone.
Necro thread aside I was also looking forward to a new UI. It's not that the current one isn't good, but better one would be fantastic.
My spritework can be seen here.

There is an old concern of mine.
When I open a help box on a unit type the male and female version are above each other. this is wasting a lot of space on my screen which is very wide but not so high.

I made myself a combined image (male and female together) 380 pixel wide. It looks very nice. However using the interface to display 2 205 wide pictures on the same level would look very nice too.

I'm pretty sure that within the GUI update, the 205x205 help portraits are going to be done away with entirely.
http://thespaceinvader.co.uk | http://thespaceinvader.deviantart.com
Back to work. Current projects: Catching up on commits. Picking Meridia back up. Sprite animations, many and varied.
Top

Attention bypassers, thread necromancy in progress ! (I wish we had a skull smiley for these occasions

Because this remarkable project seems to have fallen into oblivion, and since recent work with Fabi on the editor involves an increasing amount of graphic work anyway, I am going to pick it up where it was left. I will make minor changes to West's windows designs so that they remain consistent with further evolutions of the UI, but altogether what I'm planning won't be much different from what was previously proposed.


First thing, background research. These textures would serve for the main screen panels, and possibly the opaque dialog windows. While sticking to the "dark neutral theme" seems to have been the consensus so far, I'd like to introduce an ever-so-slight touch of colour. I've also included a sample button to check the contrast (yeah, buttons might get a bit cleaner, but other than that I'll keep the established "blue-and-gold"scheme, if only to allow a progressive transition from old to new graphic elements.)

Let me know what you think. 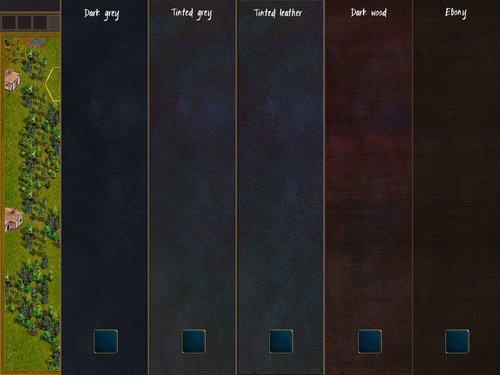 I prefer ebony, for the color itself and because it has the most (in my opinion) contrast with the blue of the button.
Top

If you're intending to seriously rehaul the entire game UI, then here's some planning i had for the ingame screen: http://forums.wesnoth.org/viewtopic.php?f=9&t=35589 (less modular than the current panels, & very heavily icon-based as opposed to the current (translatable, otherwise unpredictable & unorganizable) keyword-based). I ran out of steam there mostly because I figured such a change should come together with a change to the entire UI in wesnoth, and that task seemed to big to be fun.

Anyway Tinted Leather looks really bad to me - a bit like one of those artifacts that i don't know a name for that come with bad resampling. I don't like Tinted Grey either, the other 3 look great to me.
Top
Post Reply
124 posts