The Hammer of Thursagan portrait repaints

Forum rules
Before posting critique in this forum, you must read the following thread:
Post Reply
397 posts

His face looks a bit a pale and washed-out because you've increased the brightness, and some of the details which were there are no longer visible. Other than that, it's looking pretty good to me.
Age of Trials MP Era - Map pack
Top

Thanks for the feedback! Much appreciated!

Atz: I´ve painted away the detail to make him look younger. Then after the fixes, I may har turned the brightness a bit pale. But that´s not why the detail is gone.

Repurr: Everything on the portrait has slight backlighting, but I may have overdone it on the helmet. Apart from that, how you describe the helmet is completly wrong, so it seems that I've done something wrong even though it isn1t what you point out.
Cartoonarchy Now!
Top

He seems pretty much done to me, you took care of everything that was expected

As for the helm, I think toning down the backlighting might also fix the way we perceive its overall shape. If not, then I'd suggest working of the frontside values to better define roundness.
Top 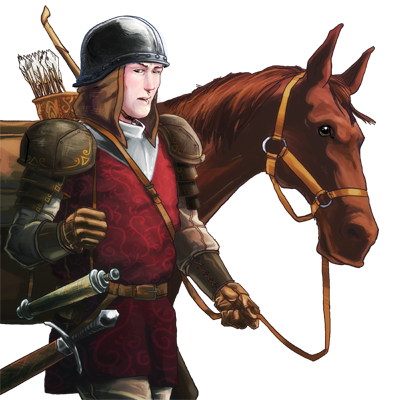 Certainly good enough by my account. I've gone ahead and committed it.

All that remains is perrin, and the four masked dwarves who likely could be done like the 4 oracles in DM(?) - that is, cloned portraits, with some central element like their masks, changed around.
Play Frogatto & Friends - a finished, open-source adventure game!
Top

Thanks! I´ve started the masked dwarves, planning to do them just as you said.
Cartoonarchy Now!
Top

In order to be able to finish this campaign, I've deviced a cunning plan!

I have a uStream show called Free Art Friday every (almost) Friday 14:00(Norway time), where I draw what requests from people, then release the art under a Creative Commons Attribution license in high-resolution.

So I though, why not use the Free Art Fridays this summer to finish drawing my Wesnoth campaign online, with ze world watching!

So yes! Free Art Friday "Summer of Wesnoth" starts in 3 hours at my uStream Channel!

Hope to see you there today!
Cartoonarchy Now!
Top

Update on masked dwarf base. I will finish this, then do different weapons, beards, helmets, and shields to differentiate them. 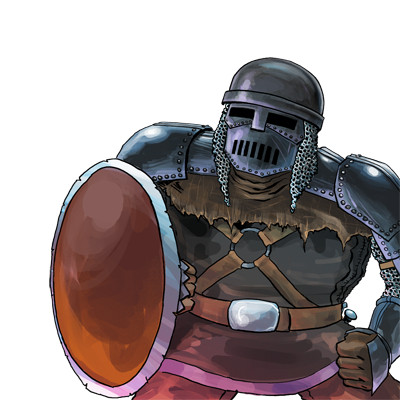 1) The way the hands are attached to the body resembles wooden doll rather than human-like anatomy with limbs attached more closely, and I perceive the effect as comical.
Is it intentional that the anatomy has to look comical like that?

2) The mask looks human-made to me, some human goth style, rather than of dwarfish making like in the old portraits that are much more in the spirit of a slightly grotesque metallic Santa Claus mask, or actually not even really a Santa Claus but just recognizably dwarfish-made dwarf mask.
Sorry if I sound irritating by comparing to the old portraits, especially if it comes from strictly personal preference, just wanted to point out that the new mask looks more human style that it imho could be.
I hope you will rather read it this way: suggestion to reuse of the details that were good.

3) It is probably a very early sketch (a rather good-looking one, though), but I find it a bit curious how the shield looks a bit like a big transparent dark orange jewel (or maybe candy).
That is probably because of the hue of the highlight at the lower edge of the shield being what you would get when light takes on the color of the orange jewel while passing through it.
campaign ruthless in your nearest 1.11 add-on server
some wesnoth-related drawings
Top

Most of these comments are things that should have been pointed out in the year or so that this portrait has been lying in wait to be colored.
Cartoonarchy Now!
Top

Sorry man for saying this now then, I'll have a look see if you have done anything on perrin.

The torso looks very flat. I'd make it seem more full by moving the bullseye ring more down and left. The belts curve could be more pronounced like that too.

Shoulders could be a little beefier maybe. They look small along with the very broad back, dwarf physique and all.

The specular on the shoulder to our left make it looks like the sun(or whatever the light source is) is on the upper left. While the rest of his upper body armor suggests it comes from the upper right.

I know it is WIP but I got this tip; have the shield be reflected on his belt buckle. The same on the shoulder to our left. Right now the shading there don't take the shield into account... Hmm I see now that the same is the case for Dulcatulos, so I reckon it might not be necessary. But if you wanna improve skills it's something you should do I reckon. Pelias is looking great btw.

Did some digging into the older posts of the thread, and found the old sketches.

Actually I find the situation quite hilarious, considering that for 'dulcatulos3.png' you got comments like this:

DUHH wrote:Most of these comments are things that should have been pointed out in the year or so that this portrait has been lying in wait to be colored.

...would make me better at crits than the olive colored names (sarcasm aside, I have rather noticed the opposite).

Please don't get me wrong, the barrel dwarves with hands attached are imho comical in a good way, and they could be interpreted as consistent in their anatomy throughout the campaign (except for the witness portrait).

If you can change the candy shield by adjusting the light color on the lower part to something different than a more saturated main color of the shield, imho that would be great, though.
Bit more purple perhaps, like the light on the skirt seems to be?
EDIT: Well, tried it out myself: 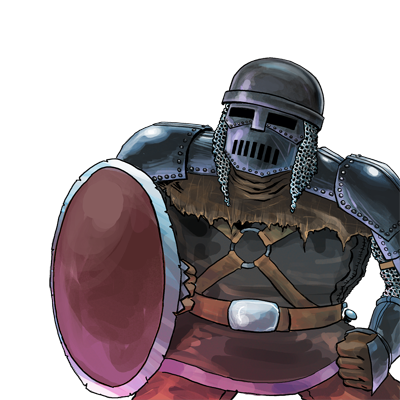 The thing I was using for recoloring, I think I copied the shield orange with a magic wand, and somehow making white transparent plus some contrast things seemed to work best.
Maybe it makes the shield look too boring now, but I think the transparency of the shield is somewhat reduced.
I don't think I understand where the purple light is coming from, though, and the legs seem to be lit orange.
I wonder what the shield is supposed to be made of?
campaign ruthless in your nearest 1.11 add-on server
some wesnoth-related drawings
Top

Thanks for the comments. I really do appreciate it.

The purple light is coming from the depths of the caves you meet some of these in. Drama-light, drama-light! So they'll seem more evil.

Sorry to cover the critique with such a blankett statement. To speficy: Everything about the anatomy and helmet design is things that should have been commented on in the year it lay dormant. Doesn't matter if simillar things had been commented on on earlier portraits. You stare yourself blind on every portrait, and that's why critique is important each time.

The stuff about the rendering of the shield is critique at the right time. I'm now working on rendering, so rendering troubles should be pointed out.

The main problem here is that just about everyone waits until they see color to comment. Which is simply a very bad chain of production.

But I guess that I will have to figure out a way to change my process to accomodate the bad production chain, since there's no sign of the nature of the comments changing. Oh well...

Things don't get comments whilst they lay dormant. If you want things to get comments, you need to post about them - and show that you're here, taking an interest in the comments. If you seem to disappear for weeks or months on end, people won't comment on your work, because resurrecting dormant/apparently dead threads is generally looked down upon by the etiquette of our forums.. And even if you are there, it's not guaranteed to bring in the crits, trust me on this (the amount of people who complained about the drakes once they were a fait accompli, despite the development happening in public, on open forums, and busily, surprised me a little). Having to change things at a late stage of production is not uncommon in this process, trust me on that too. It's happened several times, for me, that I've got a portrait (or more often, an animation) to a state I consider it finished, then had to restart it from scratch because it wasn't up to standard.

That being said, several people DID suggest that the arms weren't attached perfectly, myself included.

It's also worth bearing in mind that some things just don't show up until colouring's happened - for instance, the shield. It's difficult to know how you're going to render it at lineart stage, so once you've done something on that, people can start to see what you're going for, and critique it.

So, keep up the good work, but at the same time, do bear in mind that the project doesn't revolve around you, and that if you're not here, participating, the chances of people seeing and commenting on your work are pretty much zero, because the forum goes on without you.
http://thespaceinvader.co.uk | http://thespaceinvader.deviantart.com
Back to work. Current projects: Catching up on commits. Picking Meridia back up. Sprite animations, many and varied.
Top

thespaceinvader wrote:Things don't get comments whilst they lay dormant. If you want things to get comments, you need to post about them - and show that you're here, taking an interest in the comments.

Well, my gripe with this is not just concerning this masked dwarf, but overall. Comments tend to increase the closer the portrait is to completion, while ideally it should be the other way around. And that´s been the case whether I´ve been active on the forums and asking about specific comments, or if I´ve been away. And that´s not the fault of the commentators, but it is a structural problem that needs to be dealt with if an open source game is going to have great art-direction.

And I know that the game doesn´t revolve around me. BUT... Every artist on this project would benefit from a better production pipeline where critique comes in at it´s proper place.

And getting told that "Your fault, since your not here enough" or any other justification of the faulty pipeline.... Not really helpful.

Again, this is not a critique on the specific commentators or comments, it´s pointing out a fundamental problem that is bound to drive artists away in the long run.
Cartoonarchy Now!
Top
Post Reply
397 posts