Forum rules
Before posting critique in this forum, you must read the following thread:
Post Reply
166 posts

Whilst the position of the lower hand works, if I were going to hold an object that size and shape, it would be far more comfortable to do it with the hand the other way around, and the thumb pointed in, not out.
http://thespaceinvader.co.uk | http://thespaceinvader.deviantart.com
Back to work. Current projects: Catching up on commits. Picking Meridia back up. Sprite animations, many and varied.
Top

It's great you are finishing him for LoW

): they are generally rather large. And while their positioning is generally well done some messed up details ruin the impression of him holding the horn naturally: The upper hand's thumb should be bent more and the arm is too thick and should be at more of an angle and the fingers are missing one phalanx. The lower hand's thumb should point in the other direction (as tsi already said), the thenar could be more visible and if I'm holding something like that my wrist is a tad more bent instead of ending straight into the hand.

Have fun rendering him! 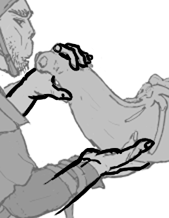 bera wrote:Retake on a goblin rouser with the flats, for the Legend of Wesmere campaign, to be used after the big battle. I may have something funny going on there with the horn, but rest seems ok to me, any CC?

Thank you for finishing the horn Rouser, he is my absolute favourite of all the goblins you did.

I can't be of much help with the art but try to describe it's usage in the campaign.
During the scenario are several changes of the opportunity caused by reinforcements that drop in for both sides.
Each of this events is followed by a change of the strategy that the artificial intelligence is using.

I like to illustrate this happenings to the player by the appearance of the horn Rouser combined with one of the sound effects that are discussed here.

Your portrait is the perfect image for that job.
Greetings, Fabi
Top 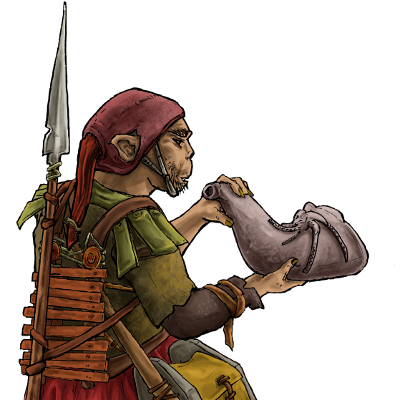 He just looks a bit gaudy to me... Is that on purpose? I tend to imagine goblins using rather raw (and due to that dull colored) materials because of their low status within orcish society.
And even if you want to paint him as a rich/important/comical/colourfull/whatever goblin I'd advise to think about the colourscheme a bit. Atm it seems like you used random gaudy colurs (green, red, purple, yellow), I'd try to choose a more deliberate scheme like browns and greens with bright yellow eye-catchers or warm colours only or browns and reds plus a complimentary colour.
Just something to think about (and quite easy to change thanks to the magics of digital picture making

Bera, do you consider him finished?
With the okay from Kitty I am going to commit him then.

Many thanks and greetings,
Fabi
Top

allright, I'm finished. Got rid of some colours of his repertoire. Colouring him like that wasn't intentional by the way, actually I had just randomly picked some of those from one of your goblins kitty

Yet, I understand his style (even with the current colours) is ok considering he has been tasked to blow that horn.

edit: I noticed the 400x400 version has pixelated linework. I don't know why it's like that, if you download it, it should look fine. 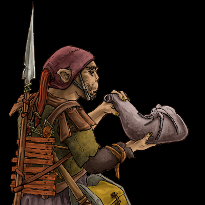 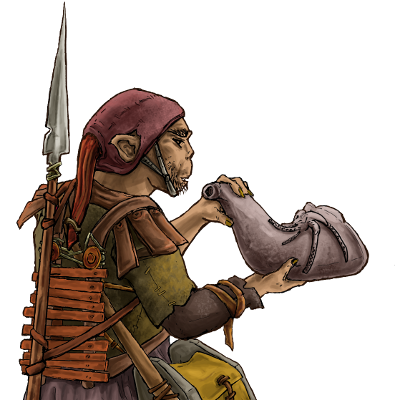 thespaceinvader wrote:Nope - alternate versions (i presume that is what this is) only need the full size.

I plan to use him more or less as an story telling image instead of an unit portrait.
This rouser calls the orcs and their allied forces to battle. He needn't even be a unit on the map field.
He has no speech, just the narrator telling about the horn signal that may not be heard by audio impaired
persons or being unhearable through disabled sounds.
This means I definitely don't need a small sized version of the portrait

edit:
Thanks to bera and all other involved artists.
Commited to trunk.
Top

I had had an urge to redo the goblin impaler portrait. It just didn't do any justice to the other great Northeners' portraits provided by Lord_Bob.
Just gave it a rough shading, and still has a good deal of work on him yet but so far I think it's a big improvent on the existing one. 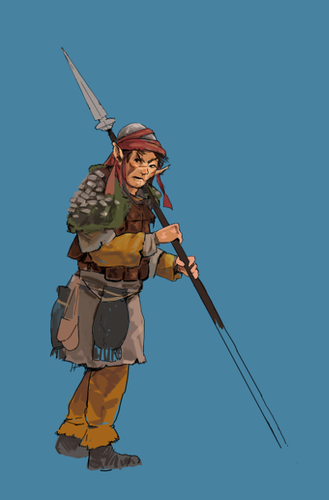 The only technical thing I can say is to watch out for inconsistent perspectives with the hands; it looks a little bit like his right/upper hand is holding the spear pointing slightly into the page, while his left/lower hand is holding it pointing slightly out of the page.
BfW 1.12 supported, but active development only for BfW 1.13/1.14: Bad Moon Rising | Trinity | Archaic Era |
| Abandoned: Tales of the Setting Sun
GitHub link for these projects
Top

The same stands true for the feet, and the left ear seems to be pointing out more from the head than the right one does, at least based on the viewer's perspective.

Ah yes, those hands get so confusing sometimes don't they - thanks doofus & Turuk. Sorry, couldn't get back earlier, busy moving out. Tried to fix that and floated his left ear closer to his head.

Spent sometime with more detailed shading and textures. It still has some more work to do. I don't know how well I like the hands... probably this question alone hints I don't, so may further want to work on them. I noticed the gigantic proportions of his spearhead, and attempted to nerf it to something more realistic, but it still needs more definition. I guess I also may need to give more attention on those scaly stuff draped over his shoulder, what do you think?

I don't worry myself too much for his waist down since it'll get cropped. Oh and Turuk, strictly speaking your observation regarding his feet might be true, but I must say I like them as they are, as they seem to be giving the image some dynamism... Though I may be saying that because find myself more inclined for a looser/sketchier style rather than one that exhibits a solid, correct one. Or I'm just lazy...

In any case, I will not have a computer till I settle but in the meantime I did some real inking over the pencils for this guy just for practice. Took less than half an hour. Even though I like to consider myself a comics artist, so far I have only been digitally inking on GIMP, so brush work is completely alien to me (that, hopefully explains that black mass). Putting that one as well, why not? 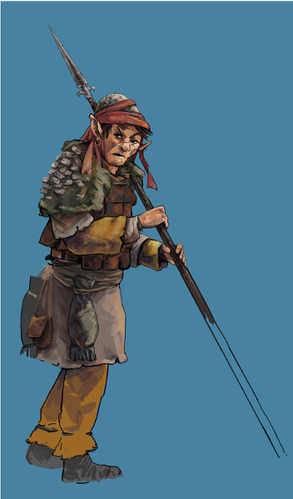 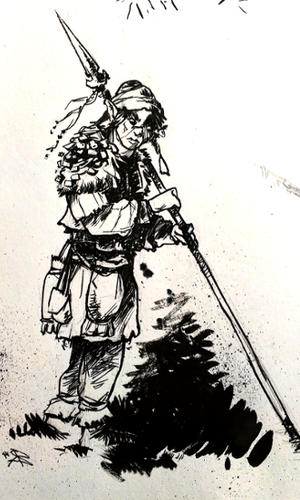