Given that this is a thread of art contributions to the core game, I don't think it's appropriate to talk about terrains from an addon.
Author of The Black Cross of Aleron campaign and Default++ era.
Maintainer of Steelhive.
Top

I believe recoloring of water has mainline relevance too. But I am not sure if any color needs to be blended in any other color.
Top

nemaara wrote: ↑
March 8th, 2018, 4:07 am
Not sure if this is the right place to ask you about this, but it seems like your water terrains in Archaic Resources don't have transitions to other water terrain in 1.13.11 (see below). Are you planning on making transitions for them sometime? It would be very nice to have them (only if it's not too much trouble to do).

This probably isn't the right place, even though it is "my terrain" just because it is in Contributions section for mainline.
As for actually answering the question: It wasn't on my radar, I don't recall trying to use it with other water, but if I know there is demand, I could put it on the TO-DO list. I probably won't get to it soon, but I'll keep it in mind.
BfW 1.12 supported, but active development only for BfW 1.13/1.14: Bad Moon Rising | Trinity | Archaic Era |
| Abandoned: Tales of the Setting Sun
GitHub link for these projects
Top

I recently dusted off an old add-on that I originally made in 1.12 and noticed it no longer works as intended in 1.14.11. This is because the transitions for earthy cave walls seem to be handled differently. You used to be able to see a bit of the earthy colour from all directions, now the earthiness often doesn't show at all (see attachment). Is this intended or is it a bug? The add-on has a mining theme and the colour of the cave hexes was important so any workaround would be helpful. I've had a look at the terrain code changes from each version but I can't make sense of it. 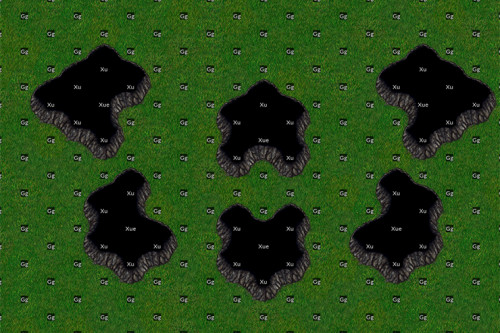 I can't say I really remember what happened in 1.12, but it doesn't surprise me that there could be a cnahge like this, as some simplifications have to be made to keep the transitions requirements from exploding. I did a quick check of the terrain-graphics.cfg file, it doesn't look like there was a mistake in ordering or wildcards. Possibly the NEW:WALL macro could be improved, but changing it to solve this will probably cause other issues. I'll look into it though.

As far as a quick fix, there are a number of flat-terrain variations and some overlays available, will any of those work? What's the specific situation and what's the intent with Xue?
BfW 1.12 supported, but active development only for BfW 1.13/1.14: Bad Moon Rising | Trinity | Archaic Era |
| Abandoned: Tales of the Setting Sun
GitHub link for these projects
Top

Hey doofus. The idea was that earthy cave wall represented a gold seam and could be mined for cash. Players had to dig through normal cave wall looking for these seams on Xue, but they are hard to find when the transitions don't show from all directions. It used to be quite subtle which was nice.
My current projects:
MP pirate campaign: The Altaz Mariners
RPG sequel: Return to Trent
MP stealth campaign: Den of Thieves
Top

There's probably some workaround, but I'll admit I'm not immediately seeing it. It probably wouldn't be too difficult to make a subtle overlay like Xu^Zyx, if that would work.
BfW 1.12 supported, but active development only for BfW 1.13/1.14: Bad Moon Rising | Trinity | Archaic Era |
| Abandoned: Tales of the Setting Sun
GitHub link for these projects
Top 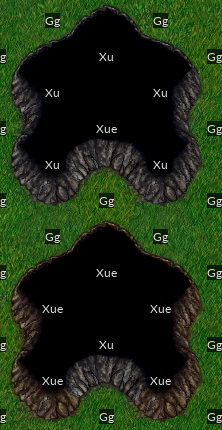