The new Wesnoth logo and the Loyalist sigil

Forum rules
Before posting critique in this forum, you must read the following thread:
Post Reply
420 posts

I think enough has been spoken to the Wesnoth font itself, I don't have much to add, so I'll save my comments until I see some more samples as Sgt. Groovy has them.

I understand this may be a slight digression, but after seeing Eleazar's comment I think it might be nice to explore the possibility again of introducing a new font, perhaps a serif font, for use with in game messages and UI. I know the largest obstacle is finding ones that have other localizations (though in my mind as long as a majority of Indo-European Latin alphabets are represented it would be successful as there's going to be virtually no way to carry Humanist styles into kanji, for example).

ancestral wrote: I know the largest obstacle is finding ones that have other localizations (though in my mind as long as a majority of Indo-European alphabets are represented it would be successful as there's going to be virtually no way to carry Humanist styles into kanji, for example).

I think you mean latin-based, not indo-European alphabets. The language family is not the same as alphabet type.

Sgt. Groovy wrote:It doesn't behave in realistic manner, but it looks real. I don't think connecting realistic with abstract elements is a good idea...In a modern setting one would assume it to be plastic, in a quasi-medieval setting it will either look anachronistic or semi-abstract.

Maybe, but issues of anachronistic or mis-matched materials are very minor compared to the fundamental graphic design issues of contrast, visibility, & legibility.

I advise you to first put together the type without any fancy effects or textures. If you find some colors and values that are strong and readable, you can then tweak the texture to your hearts content, secure in the knowledge that you are working on something that fundamentally works.
Feel free to PM me if you start a new terrain oriented thread. It's easy for me to miss them among all the other art threads.
-> What i might be working on
Attempting Lucidity
Top

This project is not dead, actually I have been doing quite a lot of research to solve the font problem. Since it seems close to impossible to find one that fits both the artistic and legal requirements, I have tried to come up with a design of my own. There is one definite benefit in a custom font -- I can make different variants of some glyphs with a different width, so it will be easier to get a good balance between words in the localised versions.

When designing the font, it became acutely apparent that the most important glyph is W, so I will present that before anything else. The font will be a Schwabacher-Rotunda influenced blackletter kind, a simple and readable one to stand out from the high-detail background. The capitals will be more Chancery-like (I find the usual blackletter forms for W too blocky and unreadable with their UU and nV-constructions). Because the logo is very detailed and doesn't work all that well in very small sizes, I thought that the W could be used as such as a mini-logo (maybe carved in a coin, in a seal, stamp etc.) That's why I tried to find a fairly unique form for it, to make it memorable.

At this point I'm interested in your initial associations and impressions. What do you see when you look at it? Do you find any recognisable shapes in it? Does it remind you of something? 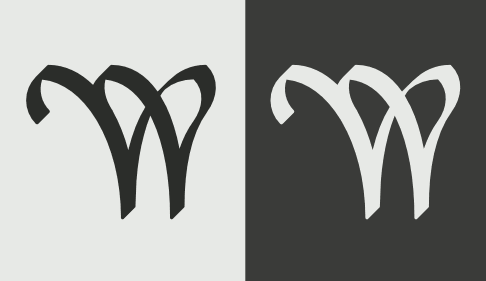 It reminds me of a W.

Okay, seriously, it looks somehow like a crown to me. But it also has some natural flavor in it: It could be made of wood or even grass.
Well, you asked for impressions.

Yeah, it looks like a W. Has a kinda celtic or perhaps viking feel to it.
My spritework can be seen here.

I looks nice. The only thing I would suggest is to either maker sure the that mid letters are straight-ish and the last letter bends the other way (meh), or make it somewhat more italic, so that it still has the beautiful swoop, but it more centered.
...please remember that "IT'S" ALWAYS MEANS "IT IS" and "ITS" IS WHAT YOU USE TO INDICATE POSSESSION BY "IT".--scott

Sgt. Groovy wrote:[...]At this point I'm interested in your initial associations and impressions. What do you see when you look at it? Do you find any recognisable shapes in it? Does it remind you of something?

The boobs are upside down... Oh, it's Wesnoth forum, it must be the letter W.
campaign ruthless in your nearest 1.11 add-on server
some wesnoth-related drawings
Top

I didn't have anything specific in mind when designing the W, other than looking graceful and having a narrow bottom, but once finished, it looks like it's made of Gothic arcs and has a gate in the middle. It could also be seen as two trees with intertwining foliages (Elves), or having some resemblance to the "Man" (ᛗ) or "Daeg" (ᛞ) runes of the Futharc alphabet (Dwarves).

Here's the whole text. It's still a work in progress but this is the basic outlook.

You may notice that I used an older, more Carolingian form of t and a more curved ("fishook") style l. That is to make the word "Battle" wider and thus balance better with the word "Wesnoth". There are narrower versions of these letters as well (and an alternative to the wide t) that can be used in other language versions, where appropriate (obviously, only one version of any letter can be used in any one logo). "The" also looks rather dominant, but it could be scaled down slightly.

I have also used the "r rotunda" for the r in "for", to conserve space, but also to give it a more archaic look. I'm not sure how readable it is to people unfamiliar with it, though. Regular r will be provided for other situations.

Personally, i dont like the R, and I prefer the T you have on the left.
My spritework can be seen here.

Well here's my grain of sand: I have no qualms with the r and recognised it as such. It might loo weird outside of the logo, though, I dunno. I'm also not a big fan of the minus "t" you used in the logo, imo it loos a bit crude next to the other letters. I also prefer the one on the left.
Jazz is not dead, it just smells funny - Frank Zappa
Current projects: Internet meme Era, The Settlers of Wesnoth
Top

I have no problem with the r. I think the thick lines at right angles make both the first t and the narrow t look sort of blocky next to the other letters - to me, the alternative wide t looks like it fits better with the style of the other letters. I also find the look of either of the wide ts more appealing in general than the narrow t.
Top

It's nice to see that you haven't dropped the subject

Altogether I like what I see.
A nitpick about the capital "W" : the left decorative leg (the upper "^" shape) and middle bar are very strong, which in turn makes the letter slightly difficult to recognize. With such thickness, my first guess was to read it as a distorted "n". It might help to toy with the thickness of the last 2 bars, and/or the left decorative leg so that the "W" shape remains unmistakeable.

Dunno if this is clear enough, I'm lacking the proper font-related vocabulary. If not, I'll provide a quick sketch.

Also, I think I'm in favour of the left alternate "t", but I'd like to see it in context.
Edit: yep, that's definitely the one that works best.
Top

Here are versions with the other ts: