may i use some sprites from the kalifa tree, or is it restricted ?

(for an upcoming map, well, it wont be out soon though

)
The best bet is your own, good Taste.
Top

Can I use some units from the Kalifa faction, such as the Amir and Ghulam, along with what they level into?
I plan to add the faction to the conquest add-on, so long as its ok with the artists.
Top

Yeah, it's fine. Credit where it's due, though, please =)

I will be getting to these guys eventually >.< my plate overfloweth with other stuff at the moment though which is irksome.
http://thespaceinvader.co.uk | http://thespaceinvader.deviantart.com
Back to work. Current projects: Catching up on commits. Picking Meridia back up. Sprite animations, many and varied.
Top

Should have posted a comment waaay earlier... Anyway you seem to be doing well with the Hakim animation and you know what to tweak already, looking good.

I finally got around to finishing the Hakim portrait. Well at least to my eye it's finished... Pretty pleased with how it turned out.

I made some tweaks to the Naffat line too:

A minor tweak to the hair(?) of the lvl1, which was imo a little to flat, making the head look small.

Made my original sprite have slightly longer arms, wider stance and longer/bigger barrel on the flamethrower. Mostly as he's used as lvl 2 and to make some smoother transition to the lvl 3.

made a totally new sprite for a lvl 3, keeping the idea with a back mounted tank, though not as huge. However this kind of creates a problem as there is no space for the bow and quiver... I was thinking that maybe he should loose them at lvl3 and instead have some form of fireball launched from his weapon.

Or maybe have a crossbow mounted underneath the flamethrower.

I'll see what I can come up with for the Jawal next. 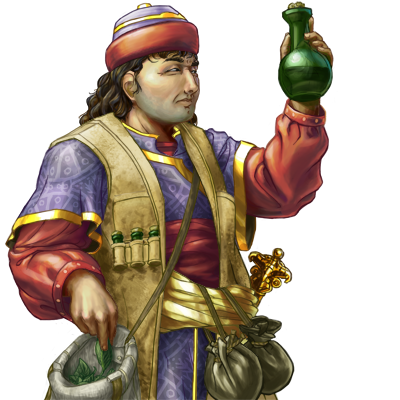 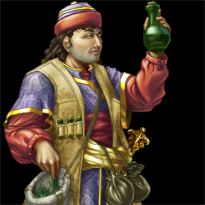 Portrait's awesome. Level 3 naffat is looking great too. Fitting the bow and quiver in isn't such a huge issue for me to be honest. They can be in hammerspace.
http://thespaceinvader.co.uk | http://thespaceinvader.deviantart.com
Back to work. Current projects: Catching up on commits. Picking Meridia back up. Sprite animations, many and varied.
Top

The naffat level 3 has a huge and UTTERLY AWESOME (excuse the caps) flamethrower, but there's a problem. Bits of it are pillowed, and generally it's quite dark.
"What do you mean, "a dwarvish dragonguard with marksman is overpowered"?"

Thanks. To me it is aesthetically an issue TSI, As cramming in a Bow and quiver along with the tank would be cluttered and just... ugly. I would prefer to use an alternate attack but hammerspace works i guess.

Hmm yeah Reepurr it might be a tad dark... tweaked it a little. But I don't see how you think it's pillowed.

Well, I spliced off the bits I thought were pillowed.

EDIT: *Sighs* There was a time when I could look at a slightly pillowed unit and not get out the pencil.

When it comes to such tiny details there might be a fine line between making something readable/outlined and making something simple or "pillowshaded". You should think of the shading in the overall shape too... These details you point out might look to be somewhat close to pillowshading but I think it is because of my effort to make it look metallic (yeah

), and because of the size. Unless there are several people that think it looks wrong I'm not changing my opinion on that. Anyway I tried reducing the apparent pillowshadiness on the hose. Thanks

Is the thing on his head meant to cover the sides of his head? Because it looks odd with a bit of skin showing on the side of his head.
Top

i think he´s wearing goggles.
btw,if the portrait is for a doctor like unit,it should be called a hekim,not a hakim.
My sprites,My Minitroops
Philip II of Macedon:"If I win this war, you will be slaves forever."
The Spartan ephors:"If."
Subsequently, both Philip and Alexander would avoid Sparta entirely.
Top

The tineen's hand stands out clearly as a blob of white brighter than the other parts of his body.

I would have made a discourse about pillowshading and when it's applicable, but TSI and sleepwalker seem to have covered that.

Vranca wrote:i think he´s wearing goggles.
btw,if the portrait is for a doctor like unit,it should be called a hekim,not a hakim.

Eminently debatable, considering that it's translated from a different alphabet. We've a native arabic speaker consulting about the names.
http://thespaceinvader.co.uk | http://thespaceinvader.deviantart.com
Back to work. Current projects: Catching up on commits. Picking Meridia back up. Sprite animations, many and varied.
Top
Post Reply
388 posts