Anyway, I changed the bow of Qanas again to look more bow-like... Though, I don't know if it's better... But I think it is?

Getting closer to final on the unit tree. Remaining tweaks needed are to the Saree and Jawal (sleepwalker is on to do that) and the Tineen (ditto), as well as the Falcons, which I'll aim to do over the next day or so. On Thursday I will be heading for home to leave my computer at my folks' along with my car, over my holiday, so I'll be stopping any art-related proceedings then, until after I get back on 10 July.

Came across something while working on some mounted units of my own that may be useful to you. A small tweak suggestion for some of the horses' heads:

Jumped ahead and started sketching on a Hakim portrait. I chose him as it's a unit line that probably only need one portrait - as a start off point.

If it's unclear due to the sketchy nature, it is a bottle he is holding up.

Another thing; TSI, I noticed that the green bottle of the sprite has been re-shaded to resemble a pouch rather than a bottle. Is this a deliberate change or did you believe it was a pouch from the beginning? 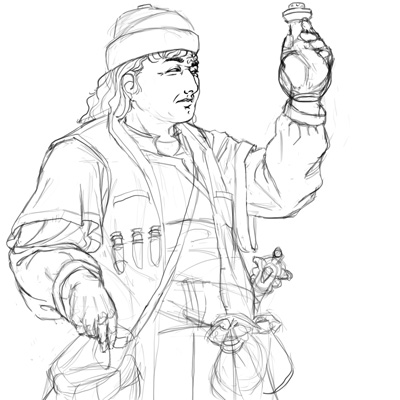 Looks great, but does his head look small? Compared to the size of his hands, it seems so. Then again, I'm not holding my art book...

Otherwise, the Hakim has a great pose and facial expression! I can't wait to see your color choices.

By the way please do not go Prince of Persia on us and give him blue eyes and fair skin...
Ecce, in caelo! Est avem! Minime, est vehiculum aerem! Minime, est virum Latinum!
Top

His head looks fine to me. It's his neck that needs a little trimming I reckon.
My spritework can be seen here.

It's face looks like an old hag for some reason. Anyone agree with me?
Top

Fog: Hmm yeah the hands might be a tad big and no, I definitely won't go prince of persia.

Frogger, Sgt. Groovy: Well, I disagree. He has a somewhat portly build and wearing several layers of cloth of varying thickness after all.

I don't recall re-shading the bottle, Sleepwalker, but it was a while ago so I might have done. I'll make a quick comparison of past versions when I get my computer back and let you know. POrtrait's looking great =)

EDIT: whilst there are still plenty of tweaks still to go, I thought I'd begin to take a crack at some animating. Beginning with the Arif. Blocking for now - I think there needs to be a little upward movement during the wind-up, and probably a recovery frame, but this looks reasonable so far to me.

Wow, the crickets sure are loud in here

Tweakery with new recovery frame, different 3rd frame. I also thought that the first two frames might work as a defence, but I think the second one is too big a jump. I'll work up something different.

It might be due to the fact that this is only the blocking, but ATM it looks like he slides his left foot along the ground, almost as if he were on ice, rather than lifting it and planting it firmly at the end of his lunge.

thespaceinvader wrote: I also thought that the first two frames might work as a defence, but I think the second one is too big a jump. I'll work up something different.

Personally I'd like to see him utilize his shield in the defense animation more than his sword, because I don't think he'd have enough leverage in a one-handed weapon to deflect a full-momentum swing.

"I'm never wrong. One time I thought I was wrong, but I was mistaken."
Top
Post Reply
388 posts