Well crap, I already had sketches for every one of these guys except for the pillager (not to mention the campaign with the actual L1 portrait...). Good work though.
For the dark gods!
Top

Girgistian wrote:Well crap, I already had sketches for every one of these guys except for the pillager (not to mention the campaign with the actual L1 portrait...). Good work though.

Perhaps they could be saved and you can work to get them introduced as alternate unit portraits that can be used as characters, such as LB did with some of the Loyalists (though yes, goblins might get less speaking parts).

Kitty, what is the strap hanging down between his legs, is it just a lead attached to the collar?
Mainline Maintainer: AOI, DM, NR, TB and THoT.
UMC Maintainer: Forward They Cried, A Few Logs, A Few More Logs, Start of the War, and Battle Against Time
Top

tiny update: the wolf got a new head and a few other thingies.

Girgistian: Did you post those sketches - I must have overlooked those, sorry! Drawing wolves isn't exactly my favourite thing - I would have liked to use yours... meh. But if you finish yours we can still use those as alternates! 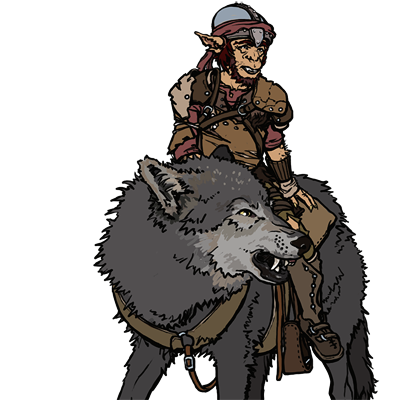 This may be a tad bit long of a crit, so bear with me.

I'll start by saying the wolves expression is well done. Overall, it has a lot of character in the face and the stance befits a slightly angry wolf.

What I'm having trouble reconciling with is the position of the little fellow on his back. It starts with his arm. At first glance, it looks roughly like it's propping him up from behind. The problem I see with it is that it's basically just going straight down, which would lead me to think that his elbow is basically bending straight behind him. If you try it for yourself, you'll find that not really a very comfortable position to try to lean with as either your wrist would be bent to an extreme degree towards your forearm, or your elbow just wouldn't support your weight since it has nowhere to brace. What you'd basically end up doing is to flex your muscle to capacity to hold that position, and that would basically just defeat the whole purpose.

So a way to make that look more natural is to simple have his hand turn around so we see the palm and his fingers are pointing away from us. Easy enough.

However that arm position brings another problem up with his body posture. He's pretty much sitting up straight really, so there would be no need for that arm to be behind him. If he is supposed to be leaning on that arm, you'd want to bring that shoulder up higher than his other shoulder, since that's where all the weight of his torso would be held up, making everything else subsequently hang down and a little bit away. Not only that, you'd want to make his body look like it is reclining away from us a bit in addition to going to the left of the picture.. If you wanted him to look like he's using that arm to twist his body to view something easier, than you'd want to rotate his shoulders a bit to match that pose. At the moment, he appears to be sitting straight up and has his hand dragging behind him.

Looking forward to updates.
Win if you can. Lose if you must. But always cheat.
Top

Great as usual - From anatomical perspective his ear looks weird though (for a goblin that is), not only it looks way too big, it's sticking out like an horn

Also, not very important, but at this stage the wolf rider (lvl1) and the dire wolf rider (lvl3) doesn't look so different, portrait wise. In order to discriminate between these units, and bearing in mind that this unit has poisoning ability, say, a small bag by the saddle that hints his curiosity in poisons could be helpful? Or maybe adding some sort of foaming effect to the wolf's mouth, like it has rabies?
comics, comics
Top

It appears to me his support arm is bent, judging by the length of his forearm compared to his upper arm. I believe shading will cancel that problem. And once again, incredible wolf depiction! I like bera's idea of rabies too, but that might make to wolf too unruly for the little fellow, unless the rider has rabies too!

Update on the gobbo knight/direwolfrider but still not finished - shading the fur just takes forever... I'll never do a set of units with fur again! Bah! I redrew the ear and rear arm on you suggestions. But I didn't go with rabies, because the wolf's claws are poisoned, not the teeth - that would be to confusing. Yeah, still tons of details to polish. Somehow I thought this little guys would be fun to draw but meh. 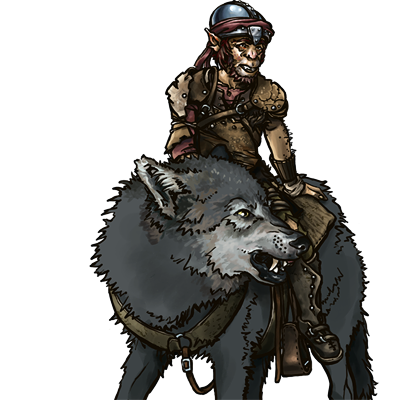 kitty wrote:... I'll never do a set of units with fur again! Bah!

The way you do fur reminds me of those paint-by-number sets. It's a very pleasing result, though.

Girgistian wrote:Well crap, I already had sketches for every one of these guys except for the pillager (not to mention the campaign with the actual L1 portrait...). Good work though.

Yeah, I feel the burn, too - I wish I'd been able to do more for wesnoth's portraits. Shame the sprites take so much time. Oh well - it's great to watch these come together though, and damn are they good.

(Although, I do still hope to do the HttT portraits; just gotta animate the mermen first, and then I think I'll (finally) have time.)
Play Frogatto & Friends - a finished, open-source adventure game!
Top

Fin (if nobody spots a glaring problem...). He's meant as Gobbo Knight and Direwolfrider.

I never liked painting by numbers all that much myself, but I can see what you are talking about concerning the earlier versions. But I do hope that this version is softer and more detailed...

(But we have enough mainline campaigns to take care of so that it shouldn't be a problem to keep HttT reserved for you a while longer...) 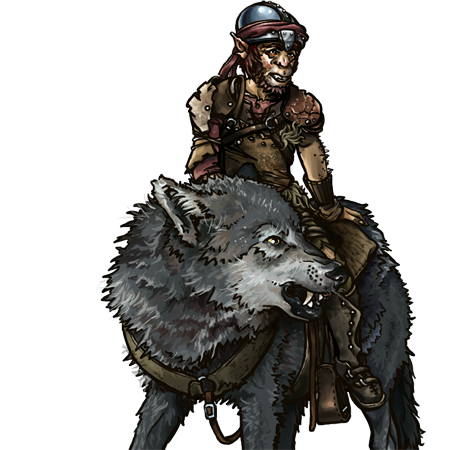 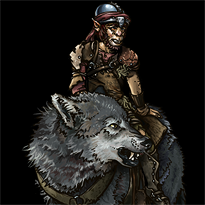 Next ones are the Nagas - here is what I've got so far for the L1. Still pretty rough but you should get the idea... 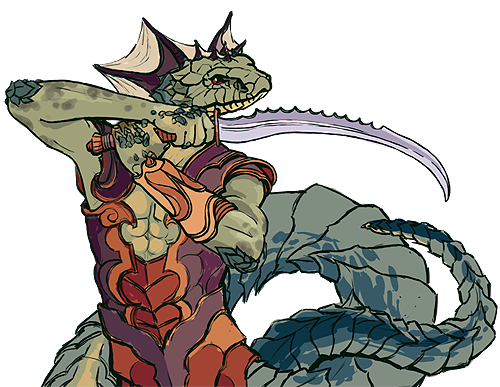 Not bad so far. I think he'd look a little more mean with his mouth open and have his hood extend down a little further on his neck, possibly bringing it into his chest a tiny bit.
Win if you can. Lose if you must. But always cheat.
Top

Yeah, I think I'll open the mouth a bit, show some teeth and the like. But I'll save a bigger hood for the higher levels.
Top

it's hard for me to imagine how his body/tail finds it's way back into the picture where it disappears in the lower right corner.
Top
Post Reply
376 posts