Forum rules
Before posting critique in this forum, you must read the following thread:
Post Reply
399 posts

His grip looks a little unnatural to me and it feels like his sword is about to slip through his fingers, as a lot of the weight would be supported by his hand. I think a bit tighter grip (mostly with his thumb, it would be more closed in a relaxed position) would be better.

They way the belt is kind of tied to a knot is a nice idea (Implying that the belt/belts are scavenged and their the wrong size for him), though I can't quite figure out how the two ends fit together. It might come out clearer with inking though.

I think we might be just about there with the orcs. The only thing i'd suggest is sitting his head a little lower, and further back, so that a helm in the appropriate style could fit more easily (not suggesting putting one on him, although including it in the image somewhere might be useful...
http://thespaceinvader.co.uk | http://thespaceinvader.deviantart.com
Back to work. Current projects: Catching up on commits. Picking Meridia back up. Sprite animations, many and varied.
Top

Thanks, added the helmet, tried to make the grip look a bit better, moved the head very slightly and fixed some small stuff I noticed myself.

Turuk: the blade is supposed to rest on the shoulder blunt side down, as you can see in the lower part of the sword. The blade widen's near the tip, so I guess it's no wonder it looks kinda weird. Hope this helps with interpreting it: 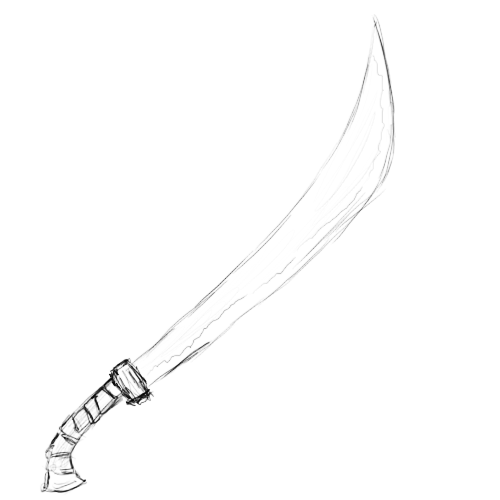 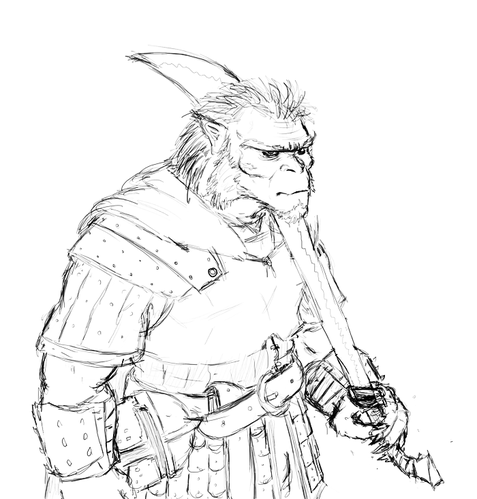 Yeah, figured that was how it was resting on his shoulder, but I was not entirely sure. I think it is one of those things that will become clear as soon as there is color on it, it just has to do with how my eyes are picking up the lines.
Mainline Maintainer: AOI, DM, NR, TB and THoT.
UMC Maintainer: Forward They Cried, A Few Logs, A Few More Logs, Start of the War, and Battle Against Time
Top

Your orc is perfect in my opinion. His helmet, on the other hand, looks much too small. I can't imagine him fitting his head in there.
Campaigns: Dead Water,
The Founding of Borstep,
Secrets of the Ancients,
and WML Guide
Top

Also, the face of the helmet is fitting for human anatomy, where the face falls straight down, whereas the orcish face is strongly slanted. EDIT: I think the orcs could prefer a "big face" bascinet.

I was actually thinking something more like this, to stay in line with the sprite, but couldn't draw it properly for the sketch's perspective. I'll try again later. 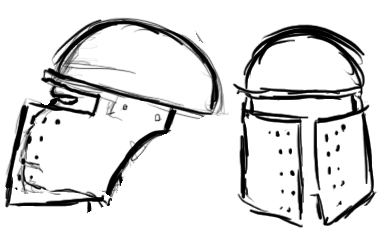 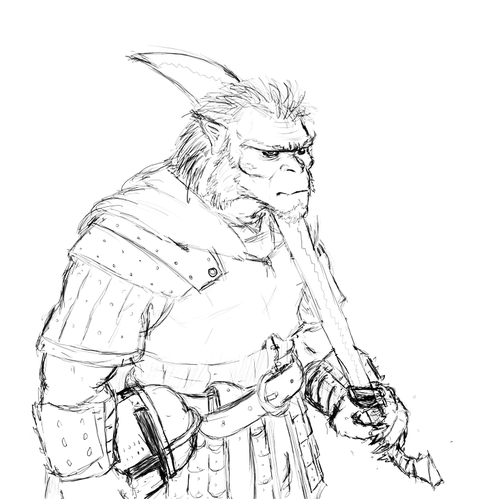 as i already told you before, i really like the outfit you've come up with for the orcs, the layered look is really nice.
and the ape-ish direction is interesting, too. but you really need to convey more energy with the orc portraits. the general impression pickslide invented for the wesnothian orcs is still the way to go. your latest orc simply looks aggrieved and too weak. he has the power-level i'd expect from a goblin. a more dynamic/aggressive pose and facial expression and perhaps slightly more canine features.

on the more technical side, the hand still needs more love and the muzzle design is making him appear toothless, a simple indication of lips could fix that.

MM, that's the only issue I have with him at present - the posing seems a little passive and defeated - he's slouching away from camera to some extent, and not really looking at anything. Something a little more active like that first orc grunt portrait we worked on:

In actual fact, I'd be tempted to rework that into a workable portrait - I really like that 'testing the blade' thing, but it needs a more logical pose. 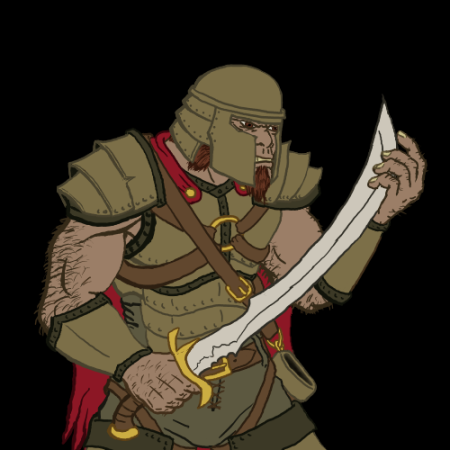 If I may suggest a better direction, I have noticed that the portraits to be found (character-specific or not) in Son of the Black Eye have the orcs as powerful, slightly animalistic, dynamic and most importantly... standing tall. All of these recent orc portraits seem to have the orc dressed and armed in a vicious manner, but hunched over or slouched, and I think this contributes to the passive/defeated mindset the viewer seems to infer when looking at the pose. Girgistian's sketch has a bit of it, and I know the jutting head has been deemed orcish, but could you not convey that while still throwing the shoulders back and straightening the spine a little to give them a more aggressive posture?

Among other contradictions in drawing these fellas. It's been almost a year we've been just designing this race, and still nothing. A campaign, yes, but nothing for the actual orcs.

I'll have one more attempt, and after that I'll either try to get somewhere with thespaceinvader's proposal of our first orc or let someone else handle this. It's getting frustrating

I'd say we're basically there on appearance/species design =D

We just need to get the poses right. The SotBE poses are at about the correct level of dynamism - this is just slightly below where we want to be. Some more confidence would be added by broader, thrown-back, less sloping shoulders.

I'll have a mess around with your sketch tomorrow, and see if i can convey what i mean. But for now, I must hit the sack...

Brief edit whilst I remember: don't forget, you can exercise your sense of dynamism a good deal more when we're doing alternates for the Warlord - we'll want a generic portrait suitable for all occasions (and the Help), then as many alternates as we can do (within reason, around 4 would be awesome) which can show a range of more extreme posing and emotion, and can be picked and chosen by campaign authors as needed.
http://thespaceinvader.co.uk | http://thespaceinvader.deviantart.com
Back to work. Current projects: Catching up on commits. Picking Meridia back up. Sprite animations, many and varied.
Top

Turuk wrote:could you not convey that while still throwing the shoulders back and straightening the spine a little to give them a more aggressive posture?

I know you are frustrated Girgistian, but do not give up, you are getting quite close and I really do enjoy your most recent sketch. The facial details and even smaller pieces like the belt really add character to the portrait. A few more adjustments may seem irritatingly minor after so much time and effort has been put into the orcs, but if that is all it takes to move into knocking out the portraits, it could be well worth it.
Mainline Maintainer: AOI, DM, NR, TB and THoT.
UMC Maintainer: Forward They Cried, A Few Logs, A Few More Logs, Start of the War, and Battle Against Time
Top

I think part of the issue here might be that his head's a little big compared to the rest of him - adding in the thickness of the armour, his posture is definitely quite timid.

I really, really like his face, though, on closer inspection. I think we've got that part absolutely nailed =D 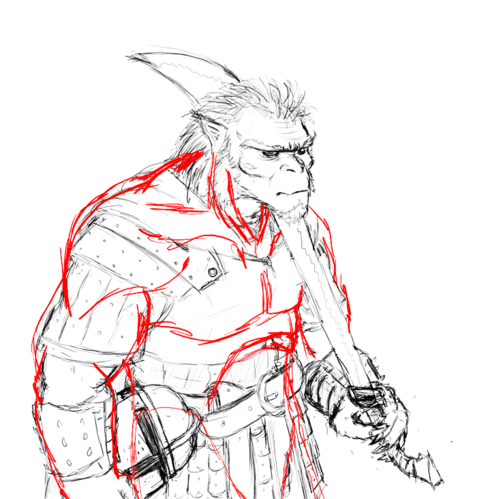 Also, on a COMPLETELY other note, I'm going to work in parallel on some of your sketches with the last of the dwarves. I picked the Naga fighter first, cos it's a line that only really requires a single portrait, and I like your sketch a lot =D 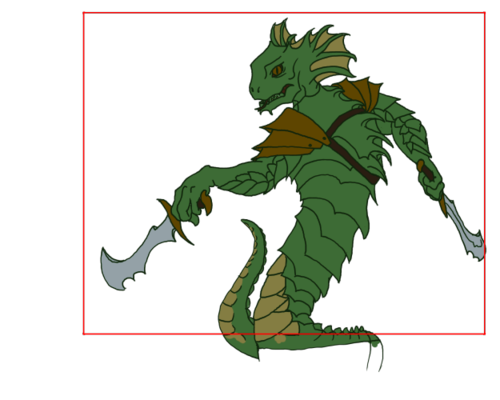