Forum rules
Before posting critique in this forum, you must read the following thread:
Post Reply
39 posts

Like Zookeeper said, there have to be more contrast between highlights and shadows.
Top

It's a nice start. I like his outfit.
Top

WRT the sword: Kest's comment made me realise another flaw - it doesn't look like he's actually holding it. If you extended the blade back, the hilt would be about at elbow level. It's an easy mistake to make when you're just drawing a bust and the hand is out-of-crop - i've done it myself. Bringing the blade either further across or more towards the vertical would help this issue.
http://thespaceinvader.co.uk | http://thespaceinvader.deviantart.com
Back to work. Current projects: Catching up on commits. Picking Meridia back up. Sprite animations, many and varied.
Top

That was part of what I meant by it looking like an afterthought. There is also no need to crowd the portrait with every feature of the sprite.
Top

Honestly, i like the look of it in there, but it does crowd the image. Maybe the solution is a wider crop - drawing in the sword arm and body to about waist level and cropping wider with more background would make it less crowded. After all, the entire frame does not need to be filled.
http://thespaceinvader.co.uk | http://thespaceinvader.deviantart.com
Back to work. Current projects: Catching up on commits. Picking Meridia back up. Sprite animations, many and varied.
Top

Things I agree with:

Anyways, this is looking really good! A few tweaks, and it'll probably be ready to go in.

You are very helpful.

I tried to do so. I am not really sure where this would exactly be appropriate, though.


Uh, if you look at the other Lutes portraits, they're not gazing at the player either. They're looking out, and a bit to our right; as if they're looking past the player at the landscape behind him. The eyes on this guy do look "a little odd", and I suspect the biggest reason for that is that the entire iris is visible - it creates a sensation of "surprise". Bringing the lids down would make him look calmer.


I think one mistake with the eyes was to put the pupil in the center of the iris (as if he was looking at the viewer), while centering the iris in the eye (as if he was staring parallel to his nose).
As for the "surprised" look i kept it in this version, since it was intented to make him look more affected/foppish showing off his blue eyes. My reference for this was Derek Zoolander

On the other hand he is a caricature and therefore possibly too extreme.
So if this edit does not fix it (i always had problems to decide if eyes are drawn right) i'll definitely try getting down his eyelids next.

So here is another version, which hopefully solves most of mentioned problems (while creating not too many new).

---------
@thespaceinvader: I actually made a very rough sketch of his arm using quickly created elliptic "arm dummies", but i foreshortened his arms much too much. When i did a "real" sketch following your suggestion, the sabre imho covers the rest of the image at untimely spots 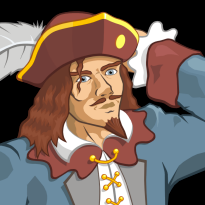 Differentiated shadows on clothing a bit. Also played a little around with his eyes (somewhat subtle, but existant) and his eyebrows. I think editing both actually harmed his foppish expression, but i still don't feel sure about this. As usual critique and feedback is appreciated.

For the left side of the face another shade tone might be good. To smoothe the transition.
Else not bad.

example to show what I mean
... all romantics meet the same fate someday
Cynical and drunk and boring someone in some dark cafe ...
All good dreamers pass this way some day
Hidin’ behind bottles in dark cafes
Top

A nitpick, but the Lutes portraits universally look to the right. Just a consistency thing, seeing as it's a mainline loyalist portrait.

Clothing wraps around the figure and is thick. A single line can make it seem paper-thin.

Sam Vimes by Josh kirby.
Another fan?
... all romantics meet the same fate someday
Cynical and drunk and boring someone in some dark cafe ...
All good dreamers pass this way some day
Hidin’ behind bottles in dark cafes
Top

A Musketeer-style character might be able to afford silk, and would definitally have the ego to flaunt it if he did, so a little thin clothing wouldn't be out of place.
Top

Weeksy wrote:A Musketeer-style character might be able to afford silk, and would definitally have the ego to flaunt it if he did, so a little thin clothing wouldn't be out of place.

Now look, this is poor reasoning. Much of the clothing is currently flat, not just "a little thin". Flat as in two-dimensional.

It doesn't look as though he is wearing the hat; rather, it sort of springs forth from his forehead. Same with the various lapels, collars and cuffs.
Top

Oh, not nearly all the clothes, especially not the coat or hat, would be like that. Currently, the hair appears flat as well. But I'm just saying that not everything should look thick, a little counterpoint to your statement, if you will. Nothing more.
Top
Post Reply
39 posts