Karo wrote:You made it a bit too dark. The bridge is now darker than the surrounding cave floor and chasm walls, and causes the bridge to look sunken, rather than raised. I'm not exactly sure that's the part that should be shadowed, anyhow.

Hm, yeah guess you're right. I was nitpicking anyway, so it's really not that much of an issue.
It's just a feeling I got when comparing the North bridge with the diagonal orientations.

Just forget about it, perfectionism is the enemy of good

Somehow the Transitions get not drawn right for the chasm bridges in two positions. There is no south-east transition in the yellow circles, but it should be there. And in the white circles the south-west transition should not get drawn as long as the bridge is in the corner, that means as long as the bridge got a ground tile to it's south-west.
How can i change this? Or would anyone do it for me? 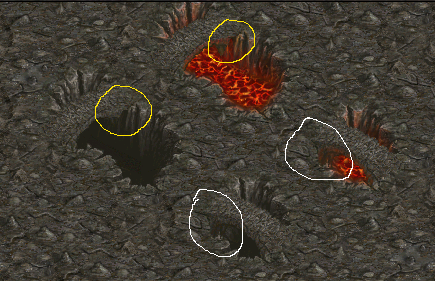 Sorry, can't help you with that technical question... but there's a thing that I've been wondering for a while concerning this cool stone bridge:

The fact that it archs. How does it look with more longer bridges? So far we've only seen crossings of a single-hex-wide chasms and that arch fits it very well.

What about, say, a 5-hex-wide chasm?
I wish I had more time in my hands.
Top

Eternal wrote:The fact that it archs. How does it look with more longer bridges? So far we've only seen crossings of a single-hex-wide chasms and that arch fits it very well.

I was just wondering if this was included yet in mainline?
It looks wonderful (apart from some minor stuff perhaps, but perfection is the enemy of good) and IMO good enough to be included...

(I could probably see for myself but I don't know how...)

Mathijs wrote:I was just wondering if this was included yet in mainline?

Sure, it's been included a few versions ago...
Try some Multiplayer Scenarios / Campaigns
Top

The fact, that the current bridge arches the way it does, makes it nearly impossible to draw art for longer bridges. So i decided to work out a completely new layout for the chasm bridge. I used a brik pattern and made the ground flat and moved the arch deeper. Before moving on with drawing, let's see what you guys think about the new layout.I plan to animate some flames on those pillars, which will be on longer bridges over dark chasm. But that's all still up in the air. 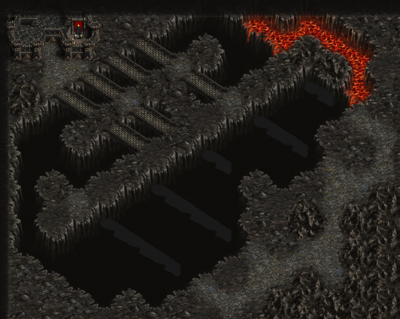 Anyway, the brick pattern looks really cool - maybe it would be good enough for a separate terrain (or replacing the one in dwarvish keeps?)
Top

Oooh... Will the wooden bridge and the vrick bridge be going to mainline?

I love them!
Check out my sprites!
Top

The flat bridge is really well done, especially the brick pattern. Perhaps some torches or creepy statues could make it more interesting.
However, I still prefer arched bridges for caves. Arched bridges are usually older and I think their archaic look fits well for chasm bridges. Longer bridges could still be done with multiple or longer arches. I tried to find some reference images on the internet, but they weren't too good.
http://www.121-go.de/pics/bruecke.JPG <-- example for a bridge with multiple arches
http://farm1.static.flickr.com/54/16634 ... 3e5509.jpg <-- very old bridge. I find it interesting how thin it gets in the middle
The wooden bridge is also great. It's a must-have for all adventure campaigns. Perhaps the posts at the beginning and the end of the bridge should be smaller. At the moment they are almost as big as a unit. Or are such big posts needed for a stable bridge? Could be, I never built one myself

defunct wrote:Longer bridges could still be done with multiple or longer arches. I tried to find some reference images on the internet, but they weren't too good.
http://www.121-go.de/pics/bruecke.JPG <-- example for a bridge with multiple arches

Thanks for the link

this is good to know. Didn't thought that bridges with more then one arch are realistic. But as i see now, they are! I think about starting with the existing bridges turning them to multihex bridges. This would be less work to get multihex bridges done.
Top

The latest bridge is awesome. I would second a request to spin off the "brick texture" as a terrain in its own right, since I think it would be very useful.

As far as suggestions for improvement go, put a slightly brighter rim against the edge of the "arch", and I think it'll help the appearance significantly by making it much more obvious that this has an arch underneath it. Other than that, this bridge rocks.

Indeed it does. How 'bout a broken version of it, for decorative purposes?

I would like to see all of the bridges in the mainline, rather than completely replacing the single arch ones.
Top
Post Reply
92 posts