Forum rules
Before posting critique in this forum, you must read the following thread:
Post Reply
123 posts


Cobra- level 0 unit, high defence but its hp isn't even worth mentioning;

suprisingly high ranged damage, obviously with poison; getting rid of a cobra is easy, however getting it's venom on you can be lethal, making it a very dangerous level 0 unit at that.

Minotaur Bouncer- I plan to make a lot more of minotaurs for different uses, these minotaur would probably be level "2" and fit the category of mini-boss, stat wise they're better than normal level 2 units and I'd expect them to be units that randomly appear in a group of 2 or 3 in the final room towards the treasure/boss/objective

a pierce charge attack and a fist blunt attack would probably be enough for it. 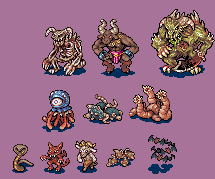 OMG, Neo, could you possibly make more snake images? There are 6 snakes in the Era of Myths that would love to have your art. (4 cobra types, 1 sand, 1 water)

NeoriceisGOD
The Era of Myths
The "How to Play..." series
Second draft.
Top

Spitting Cobra
level 0
lawful (seeing as the thing needs to use its eyesight; and we've got rather a shortage of lawful creeps otherwise)
5 moves
15 HP
movetype - normal to good defense, 1 move in forest, not sure otherwise
7-1 fangs
poison
melee--blade
5-2 spit
poison
ranged--fire

Minotaur Bouncer
level 2
chaotic
6 moves
62 HP
movetype - movement and defense just like an Orc. Minotaurs are athletic, so they don't have low defense like a Troll. They have trolls' blade and pierce resistance however.
9-4 fists
melee--impact
10-3 horns
charge
melee--blade
It's all fun and games until someone loses a lawsuit. Oh, and by the way, sending me private messages won't work. :/ If you must contact me, there's an e-mail address listed on the website in my profile.
Top

I think in Dwarvish Treasure I will give this Minotaur "leadership" that only works on other monster race units.
I was working on the proof of one of my poems all the morning, and took out a comma. In the afternoon I put it back again. -- Oscar Wilde
Top

Giant Stag Beetle- imagine a Hi, add charge and flight; and tripple it's weakness to fire; what do you get? Exactly, overpowered.

shredskin cobra- a lot like a bigger stronger level 2 cobra; except a lot more melee-focused, as with any snake, relatively high damage for it's level.

(I think the cobra should do 1 point more damage btw, it's current stats look pretty level 0) 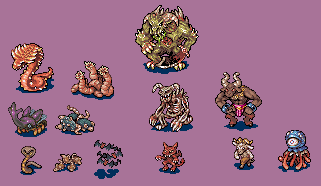 Snakes should always be lawful, as with most reptiles. They rely too heavily on the sun's warmth.

Well what do you expect; it's level 0.
It's all fun and games until someone loses a lawsuit. Oh, and by the way, sending me private messages won't work. :/ If you must contact me, there's an e-mail address listed on the website in my profile.
Top

Well what do you expect; it's level 0.

Yeah, but I'd expect snakes to be fragile with more damage than is common for their level; as they're some of the most lethal animals alive.
Signature dropped due to use of img tag
Top

Make them higher level then?

Trouble is, poison in Wesnoth is inherently for attrition; it can't kill units. Maybe the snakes should have deadly poison...
It's all fun and games until someone loses a lawsuit. Oh, and by the way, sending me private messages won't work. :/ If you must contact me, there's an e-mail address listed on the website in my profile.
Top

Two more for the batch:

trollkin midget: really just a pathetic excuse for a level 0 group unit; though being group-oriented some weird abillity that works like backstab would work nice for them

amazing flying wyrm: What is a wyrm? A limbless dragon, probably level 1; this guy just flies around being nasty, biting for melee; fireballs or acid for ranged, I'm not sure if wyrms are supposed to breath fire, I forgot. 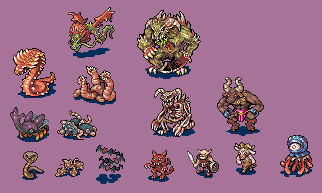 I'm changing my signature in response to this excellent thread.
The Era of Myths
The "How to Play..." series
Second draft.
Top

Neoriceisgood wrote: trollkin midget: really just a pathetic excuse for a level 0 group unit; though being group-oriented some weird abillity that works like backstab would work nice for them

Where is the man-scorpion?
Space your Noth!
Top

Cool units Neo btw could you replace my scorpion unit in the game with a new one in your style (think the current image doesnt fit the other shiny new units anymore)?? I guess yours would look much better!
Top

The wyrm looks like a Chinese-style dragon... they're famous for weather control, so it could have a cold-based breath attack, some form of lightning, or maybe some kind of holy attack -- those are in pretty short supply, and would fit just fine here.

Edit: Also, I believe somebody mentioned traps; this seems like a hallmark of a dungeon... not sure if it'd be codeable, but here's how I assume it'd work; the trap is invisible, of course, and when you get "ambushed," i.e. run into it, either

a) you're forced to attack it, and it has firststrike abilities with both melee and ranged, or

b) you just have to stay where you are and cannot attack the trap, and it hits you with an attack that has a range of "trap" and thus cannot be retaliated against.

In either case, once sprung, it automatically self-destructs.

Alternatively, you could combine the two; initiate an attack as soon as the ambush occurs and have the attack type somehow set to "trap" so the player gets hit without retaliating... but that seems rather unlikely to be codeable.
that little girl's parents were attacked by ninjas - generic npc
hee hee! - little girl
Top
Post Reply
123 posts