Hi everyone, this is me ChaosRider!
In this addon you have to fight vs other players.
You don't end your fun after your leader first death.
You'll have to take part in three battles on 3 different battlegrounds.
Each battle result (won/lost) determines your final place.
This scenario is playable with 2-8 sides.
Each side get 50% bonus to leader hp and one random 1 lvl hero.
Everytime you kill or your leader get killed leaders and units of the battleground (where it happened) are restored (full hp, no poison, no slow) and will move to new battleground.
There is 12 battlegrounds, each with randomly created terrain.
Host can set at start do you want ai guardians or not.
If yes, then in each of battlegrounds are ai guardians. They can't move, but can attack.
Before each new battle you get 50 gold.
Also you get in 2nd battle 1 lvl hero and in third battle 2 lvl hero.
Your leader and your recruits (also new) will be petrified until on the battleground show up your opponent.
At the right side of map are places for leaders. From the highest for best (3x won) and to the lowest for worst player (3x lost).
Before end champions score board will appear. If you ended game on 8th position, then don't worry. Just try it again and play better next time!

This addon is called "Champions". If you liked it, go download it or visit topic on wesnoth forum and leave feedback.
Good luck and have fun!

Version 0.0.5 is out, map has changed (new look is for those who tried it and will get update) to use more of available hexes on map.
So, where are your feedbacks guys?! This map is great for tournaments and you will also knew who had which place at end lol.
First post in this topic was updated too after uploading v0.0.3.
Creator of WOTG (+2880 units), MWC (+615 units), SurvivorsArea, RandomColosseum, RC WOTG, RC MWC, ColosseumRandomClonesBattle, BetweenDarknessAndLight, StealingWeapons, MoreUnitsForms, MoreDamageTypes, CanBeOnlyOne, ColosseumOneWinner, BonusSpam, CriticalStrike - available at 1.12 Wesnoth server.
Top

So, this time, in 8 ai sides game with 800 gold and 18 income it took only 128 turns (hehe - it might be cause one of sides had lich as leader and thx to mod more unit forms it lvluped to ancient lich and was defending in village (reg + good defense) vs drakes in semifinal), but without ai (side 9) guardians this can be done in 30-40 turns with all sides in. 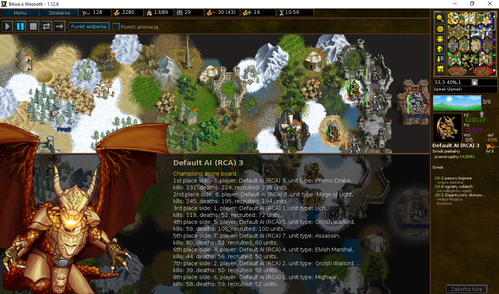