Replays of all levels by Konrad2 can be found here

Gather round, children, and hear the story of your forefathers! Birthed from a fiery dragon, raised by the cold-blooded Saurians, betrayed by the Dunefolk, they spilled their firy blood to bring you to this land, your home.

Standard Drake Faction Units
No unusual units here, outside of the prologue. This campaign is designed to explore the drake faction exactly as it plays in multiplayer. Start with Saurians, add Burners and Gliders, and finish it off with Clashers and Fighters.

-Face off against hordes of magic users- 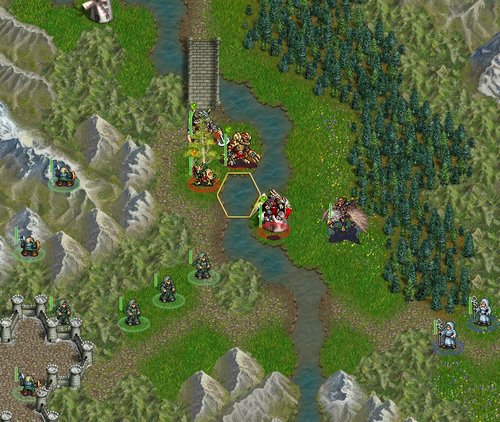 -Use the power of flight to attack supernatural enemies- 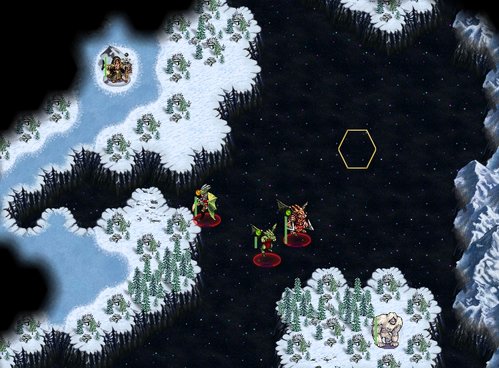 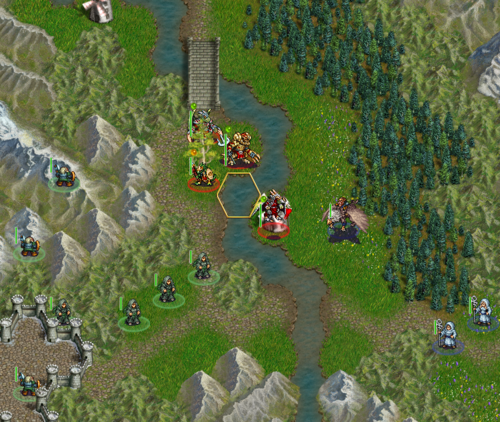 -And play a fire dragon in the prologue bonus level!- 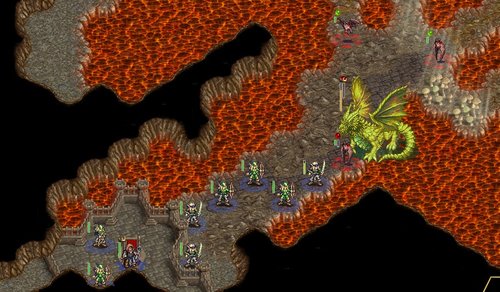 Hm. The dunefolk looks like dwarves and Dark Adepts.
If this is available for 1.12, I could give it a try, as soon as I'm done with FoaP.
Top

Here's the real image: everytime I try to fix one image above, another comes undone:
Spoiler: 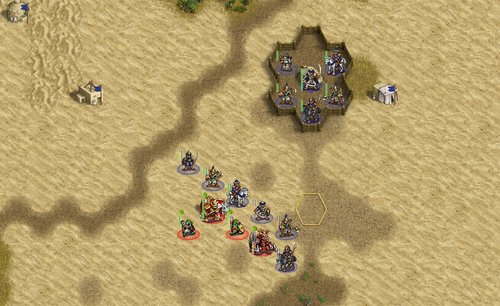 The map in last image looks a bit .. boring..empty..cheerless... Almost like it would be a .. desert.
Given the fact it is really one, I don't know what can be done about it than placing a few more embellishments... guess that's just how desserts are.
Btw, did you already find out about the undead & troll encampment tiles?

The last with the firedragon reminds me of THoT, good memories. Speaking of which, there was some crazy WML for earthquake/lava effects in a later scenario in that campaign.
Looking at the picture, it's eventually a bit too trivial to kill standard elf units on bad terrain en masse.

Note I didn't play any of your campaigns yet
Introduction to WML filtering and WML variables.
Top

Thanks for the feedback! The campaign is uploaded to 1.12.

I like the different ideas you suggest, and I’ll take a look at the WML.

The fire dragon level is supposed to be a fairly easy prologue, but it’s more challenging because the dragon is poisoned and there is no healing/villages. But it is a level 5 leadership unit and it’s crazy seeing bats doing 10-2 damage!
Top

On mobile? I don't think it's ported.

Also, my work computer barely functions and my home PC is SP2. So nope. Not gonna happen.
Top

Sorry, I didn't think that it would be too difficult.

I got a few more ideas.
- One can construct maps with unwalkable terrain in a way that you can play a cat-and-mouse game with the flying units. Though that's not the thing to go for if you are poisoned. (scenario 10 of Mountain Witch below)
- I saw people using different kind of bridges to make caves more interesting (2nd scenario of Return from The Abyss). And to also change the underlying of the bridge to sth. else. There is some shortcut with which one can place overlays without the underlying terrain. (One can put Merfolk villages on sand that way, which doesn't look bad either. Or on tropical instead normal water)
- Ashen Hearts has as well some cool visual effects in the 1st scenario (no idea about the others).

Good Luck with your campaign. 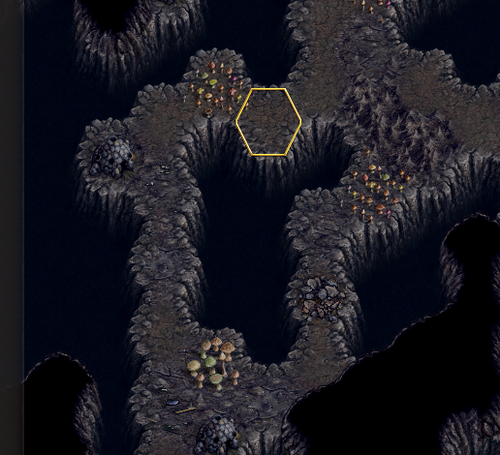 There is just one tile where flyers are safe, but they can chose where to attack, the enemy needs more than one round to walk around.

Thanks, Shiki. I’ll look into the overlays especially. Some of the advice doesn’t apply directly, as the campaign is a bit different than it appears in the picture (for instance, the cave is tiny, about the size of the screenshot and only appears in one level). And the flying cat and mouse idea is already the main focus of one level, because I really liked that idea for Drakes!
Top

You're welcome.
I tried the first two levels on 1.12, some notes:
Spoiler:
S0:
- Is it intended that there exists carry over gold?
- I think the objectives should mention "Death of the Fire Dragon"

S2:
- In 1.12 the event at the scenario end doesn't work because there exists no Dunefolk yet
- I was completely surprised that in S3 one should because of the Dunefolk suddenly fight elves. The plot could be deeper here. I mean, why on earth are we suddenly fighting elves, we just meet some Dunefolk guy who we never heard of before, and because of his idea we fight elves.

I played on the harder difficulty, and felt like one could have less gold, like -40 in all three scenarios.

_main.cfg:
- for some reason the campaign image doesn't load
- no need to read map files in _main.cfg, because they are read in the scenarios
- [units] should be included in the #ifdef part - this makes loading times faster for MULTIPLAYER
- the CAMPAIGN_DIFFICULTY and DEFAULT_DIFFICULTY in 1.13 are nice syntactic sugar
- the [textdomain] has currently no purpose. Though you can make your add-on translatable by creating your own one
- In case you do that, one can reuse strings from the mainline text domains if you switch between textdomains forth and back. There is a topic pinned in this section of the forum.

In the Dunefolk campaign:
- As I understand, the 1.12 Dune units aren't transformed to khalifate units. Thus they shouldn't advance to null, but to their respective Dune advancement.
Introduction to WML filtering and WML variables.
Top

Ooh drakes are my favorite race to play so it's great to see another drake campaign!

Haven't finished the campaign just yet, but some things I've noticed so far (played on Wesnoth 1.13.11):
-The campaign's description says 6 scenarios instead of 9
-Gold from the prologue doesn't carry over to the first scenario (I think it makes sense not to, but the objectives and carryover report make it seem like it does).
-In Scenarios 1 and 2 my team is named "Enemies" and the enemy team is named "Scaly Folk"
-In Scenario 6 (Alone again), when your leaders get killed nothing happens.
-Is the saurian leader Szel supposed to be able to recruit after Menir becomes leader? I've been having Szel stay in the keep recalling while Menir flies off since Menir's slow but I'm not sure whether him still being able to recruit is intentional.

In general I think the campaign could be harder, maybe by changing enemy types/terrain. For example, the woses in scenario 3 are slow and just get instantly fried, so they're just easy XP. And many scenarios have slow enemies and lots of rough terrain, so the flying drakes can just use their mobility to avoid the enemies completely if they want to.

EDIT:
Bug in scenario 7 (A Mighty Storm): I still have access to all recalls and recruits.
Screenshot playthroughs: Let's Play Dead Water, Let's Play Invasion from the Unknown and Let's Play After the Storm
Top

I pushed an update on 1.12 that will let the dunefolk units be placed, as well as a few of the other changes. Most of the other changes will be more difficult, and so won't happen for a few days (for instance, filtering the recall list has caused me a lot of trouble already, which I though I had fixed).

I appreciate the community's goodwill in giving such detailed feedback, it feels very welcoming. I don't plan on making any more campaigns, because I want to maintain and improve these over time (and maybe help maintain others!)
Top

Was there supposed to be a day/ night cycle in the caves at the beginning?
Top

Okay, so the epilogue doesn't play. Got some sort of message saying "error creating unit in empty field" or something.
I liked the campaign i must say, although there are story parts that could use working. As pointed out before, the parts where you fight elves and especially dwarves doesn't seem to make much sense. Especially the dwarves, as they aren't even mentioned before. If this is supposed to be taking place on the western continent, which i assume is the case, then the dunefolk should be fighting the lich lords and their followers (the human mages make sense, but elves and dwarves do not - they look kind of random).
On a side note, there's a portrait for a dunefolk leader that I've seen used in soldier of wesnoth. I think it it would make sense for the one here to have it. The conflict between the dunefolk and magic users should be explained in a dialogue only scenario between 2 and 3, with you meeting a scout at the end of 2 instead of the leader himself, and he takes you before the leader in a cutscene.
Top

I actually read this as I've almost completed a rewrite of this campaign which I'll post in a couple of hours, so I'll probably include your feedback in the next update.

In my version of the Dunefolk, they existed on the main continent since the beginning of time. Given the current strife about them, I'm pretty sure there won't be any canon regarding them for months or years to come.

Thanks for the bug report with the epilogue!
Top
Post Reply
42 posts