Kwandulin wrote: ↑March 9th, 2018, 8:55 am Yes, I need Heroes_Test.cfg for testing purposes and the Dalefjord mp scenario was too much to playtest, also it got zero resonance

Re: The Iron Bulwark

Is Domdom supposed to be pretty much unkillable? (100% defense)
And when you speak to Aiglandin and you want the Yeti...you don't get the Yeti. 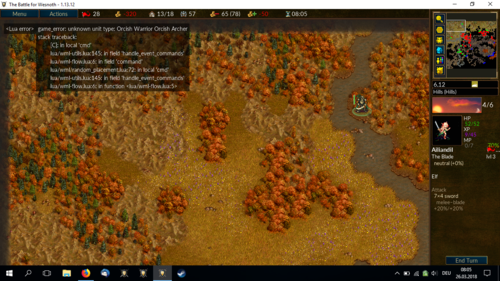 EDIT 2:
Picking up an item removes only the icon. You can pick up any item more than once.
UMC Replay Forum
List of all add-ons and (sort of) their status
Mainline campaign feedback
Where I upload Wesnoth streams
Top

Thanks for the notes. The updated version is online

So is there something ready to play in 1.12?
Top

Hey, I have been playing the Iron Bulwark scenario and it's a lot of fun - love the hero upgrades!

Minor bug report - those wind runes which restore your movement also cure you of statuses like poison and slow. (The bloodfrenzy ability seems to cure status as well.)

I got the "Side by side" upgrade for Skjol which says he can teleport to nearby units, but it didn't seem to do anything (or do I have to do something in particular?)

I also wasn't sure which units counted as Heroes (the ones which you had to keep alive) - is it just your units with the gold crowns or does it include units with a silver crown like Domdom the berserker, or the allied dwarves with the silver crowns?
And the elf leader (Ailiandil) seems to be a hero but doesn't have any crown.
Screenshot playthroughs: Let's Play Dead Water, Let's Play Invasion from the Unknown and Let's Play After the Storm
Top

I had Uthain walk over to talk to Glondolin, without any useful result ... but he could not participate for half of the battle due to his slowness.

When Onarr leveled up on the enemy's turn and got wolves, one of them were spawned between the enemies, and another one on a cave wall (with 0% defense). Both were killed before it was my turn again

I just played through Hereoes: The Iron Bulwark, and I really enjoyed it.

The fighting is intense for the whole forty turns, and there were a few points when I felt like all was lost, only to turn it around and make a comeback. In particular, I was forced to fall back to a second defensive line around turn 30, as the trolls coming through the caves threaten to overwhelm my flanks.

The variety of items and interactions on the map really adds to the fun, however I felt like sometimes they were too far from the front, making it hard to bring them into play effectively. Of course, this is probably because almost all of my units are slow Dwarves.

The units available are great. The Tyrserker in particular is great fun to use, and with the 'Drains' ability from one of his AMLAs, he's basically a one-man-army. The Steadfast guy's AMLA to summon Forefathers is fun - but perhaps the Forefathers should be Undead? And finally, unleashing the Yeti was both funny and awesome. I can't really comment on the Berserker, however, because he god awful luck and died in his second fight.

There was one minor glitch, where upon the Elf Hero taking her Pact AMLA, the Steadfast guy spoke the dialogue that should have been hers.

One thing I didn't like was the change of objective at the end, to kill all of the enemy units - I felt this was a bit of a nasty surprise, considering at that time there were 72 enemy units alive. Letting the player know about this in advance may help, as in my case I'd stopped trying to kill enemy units and was just focusing on holding a line.

Oh, and having Uthain walk all the way over to Glondolin, only for his dialogue to be "Hi guise!" was kind of frustrating, considering it took about thirteen turns in total to get him there and back.
Top

i just tried this scenario (Hereoes: The Iron Bulwark) but it doesn't work, the game gets stuck while trying to load the scenario (during the loadings screen).
Scenario with Robots SP scenario (1.11/1.12), allows you to build your units with components, PYR No preperation turn 1.12 mp-mod that allows you to select your units immideately after the game begins.
Top

Indeed, the scenario gets stuck while loading. But an error message does not appear either

What could be the cause?
Top

It could be a bug in the wesnoth engine, do you know whether that code worked in a previous version of wesnoth ( or did you made changes without testing), and if yes do you know what was the last wesnoth version where it worked?
Scenario with Robots SP scenario (1.11/1.12), allows you to build your units with components, PYR No preperation turn 1.12 mp-mod that allows you to select your units immideately after the game begins.
Top

Kwandulin wrote: ↑April 27th, 2018, 6:07 am Indeed, the scenario gets stuck while loading. But an error message does not appear either

What could be the cause?

Neither an error message nor relevant log entries appear


Edit: Found the bug through nested code intervall(?). Seems like there was some trouble with [object] outside of [modify_unit]. Can't remember changing that, but whatever. It is working now. Have fun!
Top

Right at the start I get a "[animate_unit] missing flag" error. That should be somewhere in the starting dialogue.

I went south with a dwarvish guardist to get the flaming sword but I did not get any fire type attack. I only received the overlay.

I was also promte to move Uthain next to some unit called domdom, but that unit never appeared. I only knew where to go because of the exclamation mark. Of course I didn't get any bonus unit

in turn 12 when I get called to talk to Aiglandin he is not there. Only the mark as it was with domdom.

Will continue another day!
Creator of Dawn of Thunder and Global Unitmarkers