Your work is great, but I have found one really bad bug. I can't "claim achivements" on wesnoth 1.14
Creator of The World of Death RPG, maintainer of Soldier of Wesnoth
Top

Thank you for playing and reporting this bug. I've already found and fixed the bug and will upload the fix soon in 1.16.5.

- fixed achievement bug
- please don't tell me I've written "achivement" and haven't realized this for years
- granted experience of achievements, experience flasks and experience books will now show
- changed pictures for achievements
- used "voice" for the spoken parts of the story
The future belongs to those, who believe in the beauty of their dreams.
Developer of: Trapped, Five Fates, Strange Legacy, Epical
Dungeonmasters of Wesnoth, Wild Peasants vs Devouring Corpses
Top 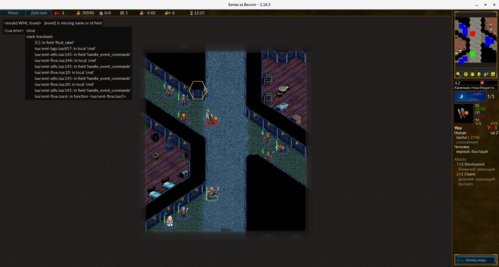 there are also some bugs in duel:
1) when i losed, the duel wouldn't end and there will be some error messages
Creator of The World of Death RPG, maintainer of Soldier of Wesnoth
Top

Thanks for posting, as it isn't a main feature in the game I will fix this with the next version. Hopefully there will be another version of the duel which features more epic fights.
The future belongs to those, who believe in the beauty of their dreams.
Developer of: Trapped, Five Fates, Strange Legacy, Epical
Dungeonmasters of Wesnoth, Wild Peasants vs Devouring Corpses
Top 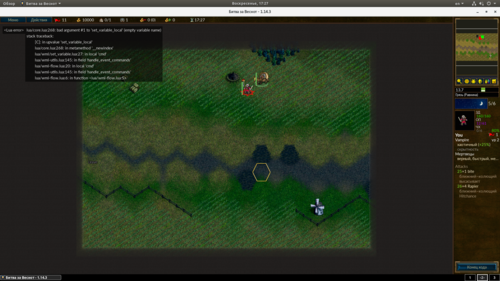 ]I tried to raid a caravan and when killed one of them there were a message "you have found one cargoload of !" and then I saw an error.
Creator of The World of Death RPG, maintainer of Soldier of Wesnoth
Top

Some bugs in RPG mode:

1. I used a treasuremap. When I dug the treasure, I got <Lua error> message and was able to dig it again and again.
2. Fall came before I got any random encounter. (Or was it just high luck?)
3. The game spent very much time "reading files and creating cache" when I chose to load a save. Eventually it crashed to desktop.
There are very much electrical currents in my brain.
If I was a mainline unit, I would be a strong, resilient Inferno Drake.
Top

Thanks you too for the additional reports.

*gnarf* I even tested raids, but never defeated a caravan. I've already fixed the duel, added a orcish duel mode, a random taunt, around 20 new archetypes which you can battle with around 30 unique abilities for the enemies. There is still a bug message I can get rid of, but it is working now.

Treasuremap sounds serious. BoW 1.14 is unforgiving if one variable isn't defined. For example the spell "convincing" just works for units which are no leaders and it fires a bug when convince is used on a leader.

Fall, at least in the current version, will come when you moved enough steps. So it's not a random event any more, to make the main map more dynamic. Same about weather (ugh not to mentioned that I spent an entire day to make rainfall which hasn't been included to the add-on yet - yeah I have no choice than the use that schedule trick).

.
I should have overworked the entire inventory system behind SL a while ago - but in BoW 1.8/1.9 there weren't so much options to avoid hardcore lua stuff. But it is no fun to "change a running system" - and I did this already once when switching from string to numeric inventory. I will probably do this again when changing the object types. Hopefully I'm not getting more creative ideas as in the duels


I feel like starting over with a new campaign could help to make this add-on more effective.
Edit: it will take some time to work out the bugs, maybe next weekend.
The future belongs to those, who believe in the beauty of their dreams.
Developer of: Trapped, Five Fates, Strange Legacy, Epical
Dungeonmasters of Wesnoth, Wild Peasants vs Devouring Corpses
Top

There is also one bug in story mode. First, I paid 10 wines for the location of the map. (it was part 7 or

Then I went to 35,5, but I had no shovel. I went to the Capital City, bought a shovel and now I can't complete the story, because mark on the map disappeared
Creator of The World of Death RPG, maintainer of Soldier of Wesnoth
Top

This is just the label. As all quest coordinates are displayed in the diary it's not a 'bug'.
The event is placed and works.

Edit: Found the Raid and the Treasurehunter bug and fixed them. When testing I indeed killed the caravan - but my luck was greater than equal to 1 (which is standard except you play as a vampire). I now added a new kind of loot dice for everything below luck 1. I hope you like sand.

This also happened for random-generated loot.
The future belongs to those, who believe in the beauty of their dreams.
Developer of: Trapped, Five Fates, Strange Legacy, Epical
Dungeonmasters of Wesnoth, Wild Peasants vs Devouring Corpses
Top

- you can now battle up 19 different archetypes in two different locations
- all archetypes have unique spells and abilities
- your enemies can now use more than 20 different spells and new spells have been added
(throw axes, poisondaggers, smash, arrows, summon beast such as bears, falcons)
- orcs have a duel site of their own with different encounters and more new enemies
- randomnpcs and randomattackers now have a portrait based on their race
(so talking to npcs is more fun)
- the profile of random generated npcs are for now a default picture
(I couldn't change it with the script!?)

- fixed healpotion bug in the duel
- entering a treasure site caused a bug, which is fixed now
- randomloot and randomproduct (caravan) will now work even if your luck is below one
- several minor fixes, reduced redunancy

- there is still a message about an empty id event
--> it doesn't affect the game/scenario, so I haven't fixed it yet
(and I already searched the code for hours)

- trying to convince / befriend a leader unit ends up in a bug message
--> it doesn't affect the game/scenario, so I haven't fixed it yet
The future belongs to those, who believe in the beauty of their dreams.
Developer of: Trapped, Five Fates, Strange Legacy, Epical
Dungeonmasters of Wesnoth, Wild Peasants vs Devouring Corpses
Top

Bug in RPG mode (necromacer) When I'm trying to summon the second Zombie (or Sceleton), the first Zombie disappeares
Creator of The World of Death RPG, maintainer of Soldier of Wesnoth
Top

Bugs:
1. Spring made snow disappear around The Stonecutter. However, the snow was back after I entered Capital City and returned to Mainland.
2. There is no number in Status II: Merfolk reputation.
3. The orcish leader in chapter III mission 5 was immune to comet scrolls but not to my starting spell nor teleportawayscrolls.
There are very much electrical currents in my brain.
If I was a mainline unit, I would be a strong, resilient Inferno Drake.
Top 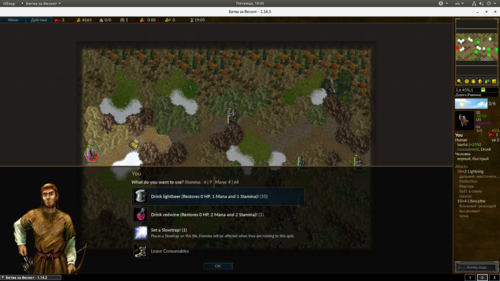 Bug:
Necromancer can summon a raven even if stamina is 0. First, you need to harm enemy with firearrow, then, you can summon a raven and stamina would be -3
Last edited by profyverya on June 29th, 2018, 4:22 pm, edited 1 time in total.
Creator of The World of Death RPG, maintainer of Soldier of Wesnoth
Top

it's not a bug not a feature

Summons: The hero will just be able to summon a single unit as he just is 'able' to control one. The only exception are so called "army summons" which can summon several units. However using this spells will also kill the existing unit. This was done on purpose as in older versions of the game you could summon entire armies without having powerful spells. To compensate that charisma increases the number of hitpoints of a summoned unit.

Please note: All summoned creatures are killed after leaving a map, so they can't be recalled.


Spring: yes I know, but this is not a bug. The spring melts the snow, as far as I know the weather effect sunshine does the same. The snow returns once time has passed - so leaving the map could be considered as spending a day elsewhere. I wanted to make the map dynamic. I don't know how long I worked on rainfall and tested what happens when there is much rain - it's really fun - almost all streets and ways will turn into mud. Awesome Heindal (I do this because nobody else does

Merfolk: this is the one and only bug, but it's a small one - a glitch - when starting the variable i used "merfolkreputation" instead of "mermanreputation" - its fixed now. Other than that it should work fine in this version. If the variable is changed the variable will appear and predict it was 0. Most RPGs I've seen don't even set variables when starting. It looked odd to me, so I've took my time to add this.

Orc: Yeah, you've found one of the tricks in this game. The teleportawayscroll is an exception as it can be used on hostile and allied persons as well. So you can use it to save a unit, flanking or disrupting the enemy, or to teleport away 'blockers' during conflicts, missions or in high level encounters. That's why I made it the way as it is. I'm not quite sure if I change the immunity for leaders, as in high level encounters a second leader blocks the escape path. A good way to flee, was to get rid of this blocker using teleportaway.

Stamina raven: intended. Stamina can be negative. If you work, your stamina can reach a negative value too. This is to force you to rest even more or eat more food to compensate this.
The future belongs to those, who believe in the beauty of their dreams.
Developer of: Trapped, Five Fates, Strange Legacy, Epical
Dungeonmasters of Wesnoth, Wild Peasants vs Devouring Corpses
Top

I have 9 stamina and can't summon a raven. Message 'I'm too exhausted I don't have enough stamina'
Creator of The World of Death RPG, maintainer of Soldier of Wesnoth
Top
Post Reply
1058 posts