The Wesnoth.org website and forums will be taken down for maintenance this September 28 at 8 am UTC for 1-8 hours.

You can find more information about affected services in the News post. ― Iris

Spoiler:
Jaffar (the Grand Summoner in 'Southern Nations') sometimes 'stands up' while he should be asleep.

Found a bug (Wesnoth 1.12.6/TLU 2.2.0b).
Used lv3 Banish ability on lv3 magical creature, it did not banish it (as expected) but some other weird things happened.
A Dimensional Gate II spawned on a hex next to the Banisher with -3 xp. I had a soldier there, and it took his place. I reloaded, moved the soldier away, the gate still spawned on the same hex.
Save:
https://yadi.sk/d/pDGInRnr3UD9CF
To replicate:
1. Move Banisher to 7,15.
2. Attack Ho'rami at 6,14.
3. The gate will spawn at 7,14.
Top

bugs related to the banishment ability (and others) are specific to EoMa (Era of Magic), not TLU. could you please also specify the eoma version/scenario name? It might be possible that the bug has been fixed in the Github version of EoMa, though I'm not sure.

ForestDragon wrote: ↑
April 8th, 2018, 11:37 am
could you please also specify the eoma version/scenario name? It might be possible that the bug has been fixed in the Github version of EoMa, though I'm not sure.
note: I didn't see the save, as the yadi.sk link you attached doesn't seem to work.

EoMa 3.0.0, scenario Ka-Gatta (comes after the 'how to use your magic circle' tutorial).
Strange, I can open the link without any problem. What does your browser say?
Top

I think it would be a good idea to either install the github version of eoma, or wait until the 3.1 update, which should be released in about a week or so. (both are basically the same thing)

not really, but it loads a while and results in a "New Tab" tab. It would be better to attach the save file via the attachment feature of the forums (accessed at the lower part of the forum post editing UI)
My active add-ons: [WIP] Ogres Era
My inactive add-ons: Tale of Alan (1.12),The Golden Age (1.12/1.13),XP Bank (1.14),Alliances Mod(1.14) (all add-ons no longer supported)
Co-creator of Era of Magic
Top

Here is the save.

ok. if you know where the add-on files are located on your OS, put this file (I mean the text file attached below) in ~1.12/data/add-ons/Era_of_Magic/utils, restart the scenario and check if the bug happens again (preferably back up the old save file, just in case. not fully sure if this will work):

@FortTell: For the effects to take place, you have to load the initial savegame for that scenario (without the "autosave" suffix). Otherwise the game will load an obsolete snapshot of the era.
Creator of Era of Magic
Creator of To Lands Unknown
Creator of Visual Map-Pack
Co-creator of XVII Century Project : Eastern Europe at War (EEaW)
Top

Yes, now everything is in working order. Both lv2/lv2 and lv3/lv3 attacks spawn no extra gates. Thank you for the quick response.
Top 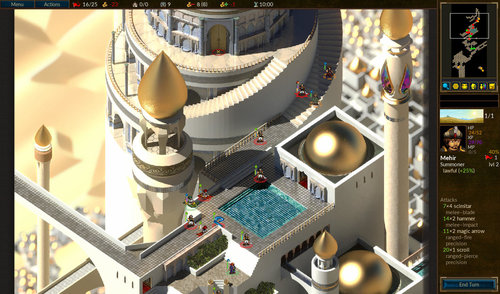 The long-awaited major campaign overhaul has been accomplished. The new version's main features are: I'd like to thank ForestDragon who helped me a lot with this release. Not only did he provide his wonderful feedback but was also heavily involved in development of this add-on. He tweaked more than thousand lines of code to make all dialogs much better than ever before. He is also responsible for countless scenario improvements. Thank you very much!

I would also like to thank Chewan for his incredible story improvements. Thanks to his detailed feedback many characters received much better personalities and interesting dialogs. Your work inspired me a lot, thank you!

Notes:
This version is only available for Battle for Wesnoth 1.13.13 or higher! It was designed for 1.14 in mind.
You need the latest Era of Magic 3.1 to be able to play the campaign. Otherwise it won't work.
This is "beta" release which means it is not the final product. Some things may change before 1.14 is out, but the campaign is playable in its current state.

I decided to release this beta version to allow people test the add-on and report any bugs they find, to ensure the campaign is stable when 1.14 comes out.

Translators:
Due to 90% of all dialog strings being modified it is very likely that all translations are grossly outdated. The new lines haven't been proofread yet (because it is still beta) so I advise you to wait for the final release and then start translating.

Final note:
This is the most visually sophisticated add-on ever created. It is almost 8 years old but this very release is special. You will understand it by playing the campaign. It shows the amazing potential of the Battle for Wesnoth game as a whole. That is why I highly encourage you people to download it, play and provide feedback so we can show new players coming from Steam what this game is capable of.

And I just finished playing it. On the other hand, I don't have 1.13, so it doesn't really matter anyway.
Top

First, I must say I absolutely love your add-ons!

I have found two bugs so far, both found in the attached save.
The first is that as of the latest version, the banisher can use banish on non-magical creatures to generate a Dimensional Gate II.
You can replicate this in the save below, using the banisher next to Mehir
The second is that while the objectives say that you do not need to kill the hydras in the swamp to win, the scenario doesn't end until you do so.

Looking forward to seeing more of your work!

It seems that if you don't get any bonus gold in "Fire Canyon," in the next scenario ("Dome of Elements"), you can't summon anything and can't proceed any further?
Top
Post Reply
1014 posts