Trinity is a sequel to Bad Moon Rising. It was Part IV in the 1.6 version, but it is not as complete as the other parts, it's in a different setting, and BMR is big enough as it is. So, it's a separate add-on that requires BMR*. The name is not a direct religious reference, but there are three branches and a big explosion (all campaigns should end with a bang).

The just-uploaded version is basically the same as the last 1.6 version, but updated so it should work on 1.7. It's not complete, but there are some scenarios that could still be fun. Hopefully not too many bugs.

just started playing this on BfW 1.7.6 default difficulty. very nice first scenario. only thing i noticed is that Haldrad and Dardrus have to reach the signpost on the same turn, else it doesn't work.

edit: in "Rebirth" the save game gets an error, "unexpected characters after variable" in an unknown line. also, in this scenario victory conditions do not work. had killed all elves, made me some new minions from the shamans, attacked the leaders ... but no victory. debugged me out.

edit2: in "High Lord" the save-game problem persists, also in some of the victory conditions the name of the next scenario is not correct, it reads "P03" where it should read "3_P03", did a quick savegame-hack to resolve this just to run into an "Illegal character in map" error about "Uu^Vyb".strangely it does load in the map editor though.
i chose to play the complete version in the beginning btw.

edit3: ah, found out. in "The Cave" it is those industrial buildings which are causing the problems. replaced them with standard villages and everything went well loading the map. besides that, the trigger for the rock-into-river thing is not really visible. had to check the code to find the trigger hex. maybe mark it somehow or just really place a rock there? also the turn limit on this one is very very tight. 50 turns is close to impossible me thinks (at least if you don't know what is to come). i upped my turns to 60 and guess what? i finished in turn 60, but did not stop for recruiting too long, already had some lvl1s to recall at scenario start and heavily used Nemesis to attack and also made me footpads which are at least a bit speedy in caves. maybe 65 turns would be halfways relaxed for a not so experienced player. in exchange maybe take away the players base income and replace some villages with something that does heal but not give gold.
Postings may contain traces of sense.
The ministry of health warns:
Living is dangerous to your health and may finally result in death.
You are a Dwarvish Berserker: you're freaking crazy and enjoy it. (100% ...)
Top

docrock wrote:edit: in "Rebirth" the save game gets an error, "unexpected characters after variable" in an unknown line. also, in this scenario victory conditions do not work. had killed all elves, made me some new minions from the shamans, attacked the leaders ... but no victory.

I'll try to re-create this unexpected characters, but just in case I can't, could you post or send me a savegame file? I think the no victory thing is due to a ranger hiding in the trees somewhere, and since you must kill all the elves, it prevents you from winning.

Will be fixed. Thanks.

docrock wrote:"Illegal character in map" error about "Uu^Vyb".strangely it does load in the map editor though.

I might have broken something when splitting this off from BMR, though I thought it still loaded at least. I get map errors when selecting a save-game to load but they don't cause an exit and they go away once the campaign has been loaded. This must be something else though.

It sounds like this campaign is more of a mess than I realized. I'll try to get this updated this weekend. Thanks.
Top

but just in case I can't, could you post or send me a savegame file?

oh yeah, btw, you did a great job there. trinity already got me interested in BMR again. good story. yeah, really. keep up the great work.

Postings may contain traces of sense.
The ministry of health warns:
Living is dangerous to your health and may finally result in death.
You are a Dwarvish Berserker: you're freaking crazy and enjoy it. (100% ...)
Top

so, in "Stormin Weldyn" the next scenario is declared "P04" where it should be "3_P04". also, the map for 3_P04 could again not be loaded due to illegal characters "Ww^Syb". and once again, the map editor has no problem with it. one wonders if BfW and the map editor do things differently ... hummm. i'll try to fix it anyway to be able to continue.

edit: ah, it's the primeval ships causing the havoc this time.

edit3: in "Navy of Elensefar" the code tries to go to a next_scenario 3_P06 or 3_H06, besides the fact that both don't yet exist it is that way leaving out the 3_H05 scenario for the full-set of races players (or maybe not, i am already confused, lol).

edit4: in "Dan Tonk" the next_scenario is labeled "P05" where it should be "3_P05"
Postings may contain traces of sense.
The ministry of health warns:
Living is dangerous to your health and may finally result in death.
You are a Dwarvish Berserker: you're freaking crazy and enjoy it. (100% ...)
Top

I just uploaded 0.0.2. Not much has been added, but many bugs were fixed. This time it should work.
Top

the three scenarios have each two new levels? is that so?

Orakel wrote:the game crashed - why is that?

Many reasons are possible, but it is probably a bug.


Orakel wrote:the three scenarios have each two new levels? is that so?

There are the same number of scenarios/levels, but they should have fewer errors. None of the branches are complete yet, I'm working on it. Version 0.1.0 will have all scenarios.
Top

hi,
Prince Haldrad Level run only about 5 Scenarios, the 6'th is a placeholder???
The 5'th is too easy...
Top

0.0.3 just went to the server. The first two levels of the Primeval branch were redone, there were some revisions to Khthon branch as well. It is still not complete, but is getting closer.

It should also be compatible with 1.7.7 now. The problem was that placing text in the campaign description with a macro (like is done with special notes in a unit definition) is no longer supported.
Top

Hi
the game Khthonsounds interesting...
runs only about 5 round, the 6'th is a placeholder...

i should do a hypersnap (screenshot)??
Top

hi
in "Dan Tonk" is the mission "defeat queen caldera"
wenn i kill her, the game is'nt over...

...general teudyren have to attack, than is show the new order and if i cilled all, the geme is completely
Top

i should do a hypersnap (screenshot)??

Sure, that would help. Thanks.
Top

i played BMR I, and then BMR II, hereafter BMR III (0.8.4) not 0.8.6!
the poverfully units from BMR I have i to hand start BMR II
the same by BMR III, the more poverfully units (many in poverlevel 3) could i use in the new game
thats was very helpful!

ok the part was called "BMR_-_Trouble_with_Elves"
an now new
"A_New_Home"

(i speak german, my english is very bad) 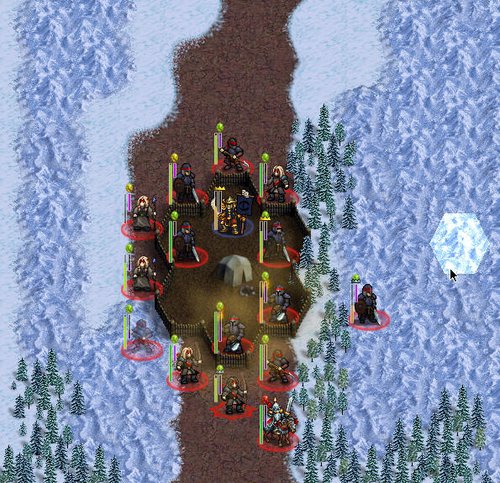 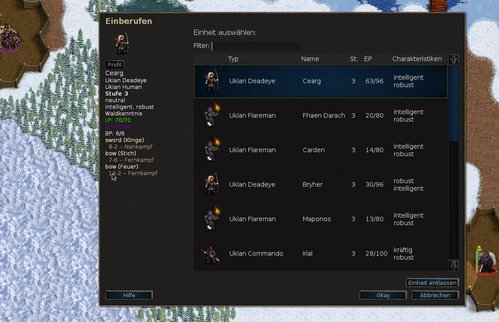