haven't been active for quite a bit of time, so now I'll replay to all the criticism:
I. name issues: I think that the name should be changed to "A Matter of Perception". any better ideas?
II. artwork: AladorIsithir, mostly units (the elven civillian doesn't have sprites and I'd really appreciate a dwarven civillian for starters, and Dwelf \/ sprites are definetly needed).
III.Lich\es: OK. I know liches are becoming more than a bit cliche, but (at time) I didn't have any better idea than them. Maybe an outcast Dwelf (dwarf\elf hybrid) would be better, we can always create a new race...
IV.solsword, as I dumped the liches /\ , Your endgame is much more sensible. thanks. Kenpachi, your piece looks good for the aforementioned ending.
the map for the first scenario is about halfway through, consisting of an "underground" area from which the dwarves come out, forested hills, and a forest. I think that the first scenario should be dwarves vs. woses (almost wrote ents), and when the dwarves defeat the woses, the woses go crying to the elves. ant suggestions?
I'm not really around any more, but you can find me in TvTropes.
Top

hi, my two cents about liches: as mentioned earlier canon says there werent't any in wesnoth at that time. which does not have to be bad, because we know that there will later be liches and maybe - nobody tells anything about that - there were already liches earlier which for some reason (maybe the ancient wars against demons/primevals/khthon/whatever) left wesnoth. so actually as you already have to do a lot of unit-creating why not create a necromancer/lich mix-up. i could think of a very ambitious necromancer who has heard old and distorted lore about liches and wants to become one himself for whatever reason one can think of (all that unlimited power and eternal life stuff). in the process he ends up half the way and has already certain lich traits (vulnerability to arcane, a draining melee) while still remaining somewhat human (a weaker arcane ranged attack, 0% resistance to pierce and blade like necromancer, other resistances as you see fit). as said, just what i could think of and of cause this would have to be worked out. at least that partial lich-ing would give reasons for his masterminding, maybe he is in search of elven/dwarvish magic or its common origin to complete the process or maybe he is looking for some artefact from the time the two races were created (mind "ancestors bone" anyone?).
Postings may contain traces of sense.
The ministry of health warns:
Living is dangerous to your health and may finally result in death.
You are a Dwarvish Berserker: you're freaking crazy and enjoy it. (100% ...)
Top

I really think that we should drop the lich (including the "Lichomancer"/"necrolich") but the dwelf being a necromancer is fine.
I'm not really around any more, but you can find me in TvTropes.
Top

Some more thoughts on the name. In real life there have been many large wars, wars that have lasted for centuries.
"The great war" (WW1) was so named because of the very large number of countries involved, and for the shear amount of damage and destruction that happed in the (relatively) short amount of time it lasted for.

just noticed: dwelfs aren't possible, as the elves and dwarves haven't met yet. I need a better idea for an enemy\hidden mastermind...
I'm not really around any more, but you can find me in TvTropes.
Top

Orcs or drakes?
Why are you wasting your time reading this when you are here for the forums?
Top

Remember that this is before The Rise of Wesnoth. Orcs are on the Old Continent. Drakes are mostly staying on their island that is not really sunken in yet.

While TRoW is chronologically the first appearance of Drakes (as with any other races it uses), as far as I can tell there is nothing in the campaign indicating that the entire Drake race lived on that one little island. Given that Haldric and company had no previous experience with them, they certainly aren't found on the Green Isle, but that doesn't mean that there are no native populations living in what would become Wesnoth.
Stone Remembers: A novel in the Wesnoth universe
A-Red's Sprite Art Thread
Top

Okay so they are out of the question. Maybe trolls? After all, they were there when humans first arrived. But, seeing that there are only 5 types of units in th troll faction, this might be a last resort if there aren't any others to go with.
In one of the campaigns, (SoF, i think,) dwarf mercenaries were hired to dispatch of Thursagan and Rungir in the volcano. Maybe rebellous dwarfs or elves.
Why are you wasting your time reading this when you are here for the forums?
Top

Dragons? Nice idea, but that would result into adding units into the campaign to balance the enemy. And if you didn't want to take that time and just use mainline, whats the closest thing? Drakes.

Nevertheless, a good idea. The fire dragon needs to be shown a little love.
Why are you wasting your time reading this when you are here for the forums?
Top

Sithras wrote:Dragons? Nice idea, but that would result into adding units into the campaign to balance the enemy. And if you didn't want to take that time and just use mainline, whats the closest thing? Drakes.

Perhaps you could use saurians in there as the dragon's "minions", like in TRoW?
Top

I think a dragon could be a good mastermind, and we shouldn't worry about his army until later on.
I have now almost finished the map for the first scenario and will start coding shortly.
I'm not really around any more, but you can find me in TvTropes.
Top

Re: A Matter of Perception (Better name needed)

(Sorry about the thread necromancy)
attached is the _main file, which is erroneous. what am I doing wrong? 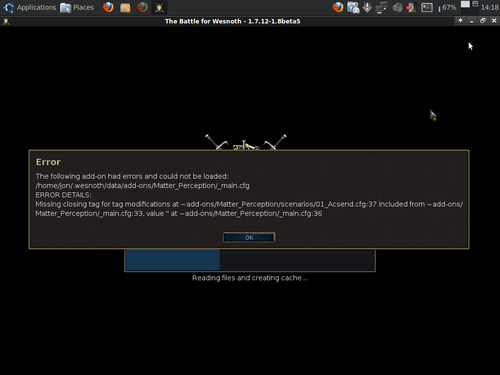 I'm not really around any more, but you can find me in TvTropes.
Top
Post Reply
32 posts