Mmlh wrote: ↑May 12th, 2021, 12:43 pm No, I mean that the Drain special on attacks does not work on the final set of human enemies in S4 (after the choice between fighting and leaving), as if they were classified as Undead. But this is listed in the IftU walkthrough on the Wenoth wiki, so I assumed it was intended. Dehydration not affecting them makes sense.

Before you stark fighting that clan of humans Galas gives Mal Keshar specific orders: no killing and something about no torture. Which means plague and drain won't work of them. I'm pretty sure it also gets added to the special notes after Galas gives his orders.
UMC Replay Forum
List of all add-ons and (sort of) their status
Mainline campaign feedback
Where I upload Wesnoth streams
Top

That's a very good point, I should really read the objectives more carefully. It does make me wonder why Galas doesn't mind on the next scenario, S5a, since those bandits are somewhat related, aren't they?

Mmlh wrote: ↑May 12th, 2021, 8:52 pm That's a very good point, I should really read the objectives more carefully. It does make me wonder why Galas doesn't mind on the next scenario, S5a, since those bandits are somewhat related, aren't they?

To give more context:
In S4 you first fight Orcs. Then some 'bad' human bandits. Then some other humans show up and thank you for killing the first humans because those belonged to a group of bandits that took over the 'good' humans outpost. Then you have to fight the 'good' humans because of misunderstandings, and Galas says no torture or killing.
In S5a you encounter the big boss leaders of the 'bad' human bandits of S4. So yes, they are related to the 'good' humans in S4, as in they attacked them.
UMC Replay Forum
List of all add-ons and (sort of) their status
Mainline campaign feedback
Where I upload Wesnoth streams
Top

That makes a lot of sense.
Top

This happened in S16. Not sure what happened, but after recalling two Shydes and two Prowlers, the third Prowler (who had picked up the Potion of Draining) became grey, and then everything went wrong. Restarting fixed it. The units were also not there anymore when I reloaded the save, and I had to recall them again. 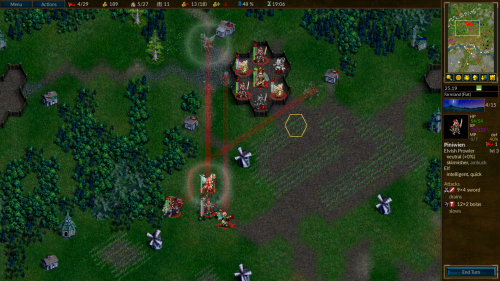 Restarting fixed it. The units were also not there anymore when I reloaded the save, and I had to recall them again.

You're in planning mode. Disabling it should fix this, unless you prefer it.
Creator of "War of Legends" and "Hero of Irdya: Book I."
Former-Maintainer of Start of the War
Maintainer of Forward They Cried
User:Knyghtmare-:-Friend me on Facebook-:-Follow me on Twitter
Top

As knigthmare said, that's the planning mode. Pressing 'p' enables/disables it.
UMC Replay Forum
List of all add-ons and (sort of) their status
Mainline campaign feedback
Where I upload Wesnoth streams
Top

Oh thanks, I'd never heard of that! I probably pressed p accidentally and didn't notice.
Top

This release primarily addresses an issue with Wesnoth 1.15.13 (coming soon) that causes fatal Lua errors during cutscenes, breaking the running script and leaving the game in an incorrect state. Related to this, a long-standing bug causing the game map to remain dark when pressing Escape in the middle of certain cutscenes is also fixed.

It also introduces a few minor changes to some Verlissh units:
On the subject of the AMLA list options causing the list to disappear in Wesnoth 1.15.12, I'm happy to inform that I figured out the cause and have already pushed an engine-side fix that will be part of Wesnoth 1.15.13 when it's out.

Finally, there is a new 1.15.x-specific issue where ambient sounds will not always play. It sucks, but I can live with it for the time being.

The complete changelog for this version of IftU follows:

The complete changelog for the bundled version of Naia follows:

Add-ons server (campaignd) admin and maintainer
Author of the unofficial UtBS sequels Invasion from the Unknown and After the Storm (now available for Wesnoth 1.14.x and 1.15.12+).
Top

When you advance Erathan to a Greatbow, and give him the item that grants Marksman on ranged attacks, the combined specials take up two lines and obscure the hit chance. I assume this is an issue with Wesnoth and not with the campaign specifically, but I just thought I'd mention it.

The sound effects for attacks hitting don't play in some scenarios, though that could just be me accidentally hitting a button I don't know does something.

S10 has no early finish bonus, but it does have approximately 30 income per turn near the end, and S11 is one in which gold is very useful. This seems to me like it just makes people drag out the scenario for extra gold, since activating the runes can be done in the final turn if you kill all surrounding enemies and place a unit nearby.

I'm not sure I like the chest with gold in S21 basically being a necessity in S23B, yet being somewhat easy to miss. The scenarios in between are also very long, which makes replaying it all a bit of a pain. But I guess this is a matter of taste.

The walkthrough tells me there were hidden story glyphs in S22B, but since this was my first playthrough, I thought it better not to go looking for them. Is there any chance I can still get to know what they say without replaying the full scenario?

I finished the campaign and I really enjoyed it! I started After the Storm, and that looks great, too!
Top
Post Reply
235 posts