Feedback for the multiplayer campaign mode for Legend of Wesmere.

This is the scenario The Legend of Wesmere campaign begins with. If you've recently played this scenario, please tell us your thoughts about it.

Reasonably clear - it would be nice if the dialogues make it very clear that the threat from the orcs cannot be overestimated and that we would be lucky if we can actually beat one of the bosses.

Good beginning, but maybe it would be nice if the allied elf would offer an in-between comment when orcs first engage with our troops. Something like: what are you doing fighting them, lay down your weapons etc. The surprise element after their in-vain surrender can be stated in an even stronger way.

Realizing that it can only be won be retreating any troops facing the eastern orcs and concentrating on one of the western orcs, preferably the south-western one, which has the weakest troops.

7 but this can easily be improved

(I think it would be important to make the first scenario not too difficult and to guide people to act in the right way so that they can actually beat the computer in their first try without having to find out the correct main strategy (i.e. attacking one of the western bosses together) the hard way. Otherwise people might decide to stop their attempt at playing this nice campaign!)

See above - in addition it would be nice if at least some the allied elves would leave their castle after they realize that surrender is not a viable strategy when dealing with orcs.

(1) What difficulty levels and what version of Wesnoth have you played the scenario on?
Normal - 1.9.4

(3) How clear did you find the scenario objectives?
Very

(4) How clear and interesting did you find the dialog and storyline of the scenario?
Dialog was clear. Rather banal but urgent enough to fit the situation.

(5) What were your major challenges in meeting the objectives of the scenario?
Keeping or leveling any units for the next scenario. We did not play it as smart as we should have, but we lost a lot of units just making it to the closest leader.

(7) What, if any, are changes you would have made to the scenario to make it more fun?
Give a different direction to go depending on which leader you kill! By this I mean a different scenario for each leader's direction. This would make it far more important and interesting to target different leaders and move your troops in different directions. It would also increase it's replayability immeasurably!

(9) If you know a bit of the Wesnoth Markup Language - do you think that the WML of this scenario is clear and well commented? If not which part would you like to be documented better?
Didn't check.
Top

Could anyone pls tell me why once I finish this map the game says "can't find Hostile Mountains" scenario? I'm starting this scenario from MP menu, two players. Basically, I want to play entire campaign in ccoperative mode, but cannot find a way to do this. Pls help! 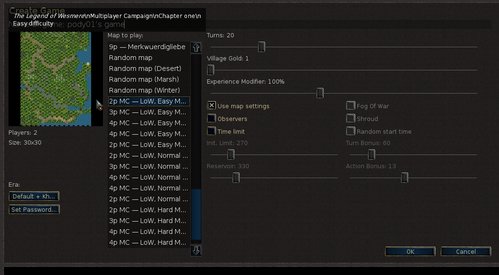 I just noticed that there is a difference between when I played this scenario in 1.10.7 SP mode hard difficulty and more recently in 1.11.18 MP mode easy difficulty. When I first played in the old version, after velon says: go join kalenz, he and all of his units become mine, while in my recent playthrough of this velon's units remain his and all they do is defend him after he gives the said dialogue. Also, in my recent playthrough, all of the other leader's names are the name of the host and not the orcish names and velon's name that they should have.
Are all of these intended?
replay is here:
1.11.18 easy mode MP: http://forums.wesnoth.org/viewtopic.php ... 99#p577299
1.10.7 hard mode SP:

In terms of balance and design i would say this is well designed and is much more entertaining than the first scenario of HttT. You really get to kill stuff here.
Top

Under Wesnoth 1.12.2, campaign Legend of Wesmere, Scenario 1 The Uprooting: I still don't get control of Velon's units.
Top

Return to “Legend of Wesmere (multiplayer)”