Scenario 18: The Portal of Doom

Normal 1.10.2
Difficulty: 5
Objectives: 100% clear, although the last one was kind of pointless.
Dialogue: Good
Challenges: Navigating the ice and trying to avoid the water, trying to save vets. I saw that i was going to be fighting mostly skeles and ghosts, so i spammed HI and WMs, only to find out that the HIs only moved 1 space on ice, and the WMs had to stick behind them or else they'd get slaughtered, so it was like a long wintery march.
Fun: 7
Changes: That last objective where everyone had to go in before delfador was a little weird. Especially because i had killed all the enemies by this time, including illiahmalal, so i was just marching everyone back there one space at a time. This was probably the hardest part of the scenario.
Reloads: None
Fate is against me.
Top

Great Mage (Difficult), 1.10.3. 200+something (didn't use all but still ended with only minimal gold in the next one). Seriously this scenario again features only a few high level recruits and thus is pretty easy. I killed all units incl. the Lich then leisurely walked and closed the portal, then the lich appeared a second time, was killed a second time (without any dialog) and then finally Delfador panicked and we had to retreat although no enemy was left on the map. This scenario has some serious design flaws, although the basic idea is good. I would remove the whole moving back business and the ability to recruit L2 units, at least on highest difficulty. It was ok to get a few L2 recruits with Kalenz, but here where I have a wide range of mages to recall there is no point in offering L2 recruits. It makes all your effort earlier to recruit and level mages look pointless when you throw such an hilarious amount of levelled mages for free at me and give me the ability to recruit L2 mages on top of it.
I am a Saurian Skirmisher: I'm a real pest, especially at night.
Top

(3) How clear did you find the scenario objectives?
Clear.

(5) What were your major challenges in meeting the objectives of the scenario?
No challenges.

(7) What, if any, are changes you would have made to the scenario to make it more fun?
The scenario is designed to be a run-fight-hybrid (at least that's my impression). You are supposed to get to the portal and back to the mine shaft asap, even if that means fighting on horrible terrain, because the lich and his blob of doom is approaching – and getting sandwiched would mean certain death. However, it doesn't really work that way. Just stick to the woods in the map centre, camp the western river shore and wait for them to banzai charge into your lines (and that includes the lich's forces, which aren't scary at all). So it's not a good “fight” scenario. Time is not an issue (40 turns), finishing early has no relevant benefits – it's not a good “run” scenario either. Furthermore it's possible to get to the northern keep pretty quickly, position you heavy hitters, wait for the boss, whack him (twice)! Terrible map design.
….
The basic idea of this scenario is good, but it's poorly executed. Overhaul needed.

1) What difficulty levels have you played the scenario on?
1.10.7 - Normal

(2) How difficult did you find the scenario? (1-10)
7 - If you "hide" in the woods and use the terrain to your advantage it isn't too difficult, but you've got to watch out for lich and his troops.

(3) How clear did you find the scenario objectives?
Clear.

(4) How clear and interesting did you find the dialog and storyline of the scenario?
Was ok. But Illah-Malal asking Delfador to join him? I'd rather see him mocking him or something.

(5) What were your major challenges in meeting the objectives of the scenario?
The major challenge was to find the right approach. I first tried to go directly for the gate and lost quite a lot of units. The second time, I split my forces, when Malal came but consequently lost a lot of units. The third time was the charm as I bulked up and waited for both enemies to attack me. I only lost one Red Mage this time.

(7) What, if any, are changes you would have made to the scenario to make it more fun?
Let Malal be more defensive the second time he appears. I ended up with no enemies on turn 25 which was a little awkward.

(8) Was there any event that caused you to lose the game and forced you to reload or restart the scenario?
See #5. I tried three different approaches and the third was the least costly one.
Top

first try: tried to move to middle mountains and defend there - failed with half of my units at the mountains.
second: defence at the camp with steelclads and mages - failed when that malal lich thing arrived.
third: rush with berserkers: managet to get Delfador to the circle, but then i had no peopel to defend him.

will change this post once i'll win. maybe i will just spam lots of dwarvish fighters with some mages.

oh, by the way! i don't have any white mages from the mission when Delfador met Kalenz. also, i got one mage of light, i don't have it too. attached a screenshot of all my 2-3lvl units. intended? 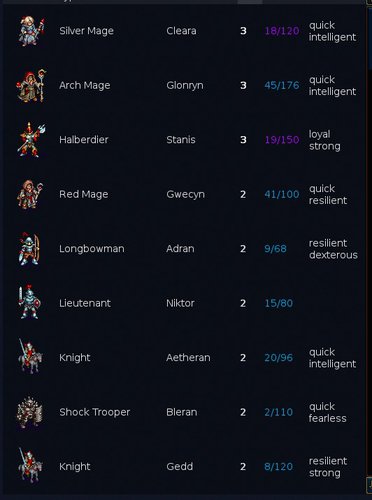 (1) What difficulty level and version? Challenging
(2) How difficult? (1-10) 2
(3) How clear did you find the scenario objectives? Clear
(4) clear and interesting dialog and story? Still some lingering questions, but maybe it will get cleared up at the end.
(5) Major challenges?

The first time I recruited some L2 dwarves, but I dont recommend them due the high cost. My troops stayed on the west bank of the river and got most of the bad guys, then everyone moved east. It was torture moving 3 MoLs across the ice and snow only one hex at time, while the banebows, chocobones and wraiths move quickly.

Restarted because I had no interest in moving my guys back again at a snails pace when the second objective came up.

The Second time around: recalled 3 MoLs, 2 Halberdiers, a Cavalier and a Lancer. The Lancer and Cavalier worked great to finish off wounded enemies. This time my troops moved straight north, it was such a releif to move quickly! Got to IM's castle and waited. He appeared on turn 9 in mid day. That made it easy. After taking his force out it was a breeze to finish everyone else. Sent a couple of MoLs and the Lancer south with Delfador. The rest of my troops went back to teleport out. Then IM appeared again, this time alone. That guy is persistent. Finished on turn 19/40 with -255 gold.

(6) Fun? (1-10) 7. I liked the teleporting idea and getting the book over to close the portal.
(7) Changes?
Unclear as to why the game suggested to use dwarves. My L3 units from my recall list were better at fighting undead and cost less than the L2 dwarves.
The icy river was ok, but the snowy mountains were not fun to navigate -- twice.

I have ended with negative gold in almost every scenario now. It doesn't matter in this campaign, because you get either what you finish with or the min starting gold, whichever is higher. It doesn't follow the normal incentive to capture villages. Capturing villages adds another level to the game because you will need gold to carry over. Always being in the red doesn't make sense. If you operate in the red, you shouldn't be able to hire more guys or hire your guys back. The troops never get paid their upkeep. By now I think they would have quit or joined the dark side.

(8) Reload or restart the scenario?
Yes, see #5
Sometimes life unexpectedly throws a Troll or a nasty Queen Naga in your path.
Top

1) What difficulty levels have you played the scenario on?

- Actually clear. Close the portal and get the hell outta there!

- Pretty good, and since Illah-Malal is still "alive", I guess I fight him in the next scenario?

(9) If you know a bit of the Wesnoth Markup Language - do you think that the WML of this scenario is clear and well commented? If not which part would you like to be documented better?

Clear, the exchage with Illah-Malal is fine.

The terrain frustratingly slows down the units, so slow units are better left out.

Illah-Malal's guard is not so much strong, should have more units. Edit: Because of the build-up, I expected this level to be more of a showdown - instead, we got a quite easy level. I also expected the portal of doom to be, you know, a portal of doom. Instead, is it just a touchdown spot. What about the portal of doom producing enemy units each turn?

Content Feedback wrote: ↑
May 22nd, 2009, 11:57 pm
(9) If you know a bit of the Wesnoth Markup Language - do you think that the WML of this scenario is clear and well commented? If not which part would you like to be documented better?

Clear. Run to the spot, touch the spot, run back.

Losing no unit on the way back.