next time make sure to bring suggestions in time, after the the RC1 (in this case: 1.13.12) is tagged (in this case: 18 March) it's waaay too late to add features like this to the next stable versions.
Scenario with Robots SP scenario (1.11/1.12), allows you to build your units with components, PYR No preperation turn 1.12 mp-mod that allows you to select your units immideately after the game begins.
Top

this one came up during an AI vs AI. 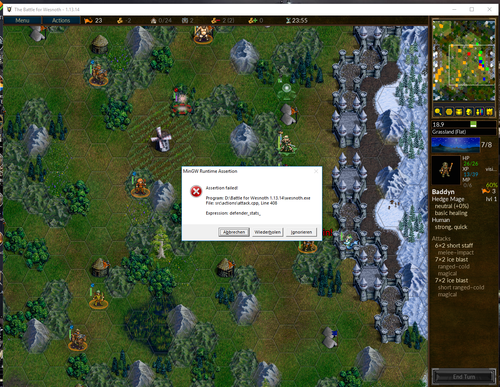 Sadly, do not have any save as i was observing.
Remember, "Nothing flies like a Filburd!"
Top

Sorry to be bringing this up, I don't know what the correct forum is for this but I found a rather odd error with the Drake Thrasher's animation.

I do not remember this happening before so perhaps an error was introduced in recent versions? Since the unit has animations that obviously took time to draw I figured it would be a priority to set this straight. It shouldn't be very hard but I believe it is necessary because it looks quite odd currently.

This happens when the thrasher's spear attack is used. 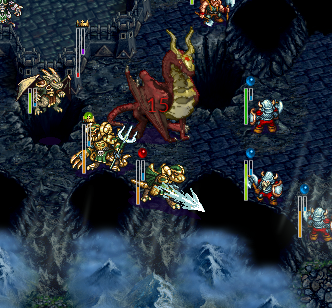 Units that do not have the sprites made for an north facing attack-animation will use one of the existing attack anims instead, that is not a bug.
Remember, "Nothing flies like a Filburd!"
Top

Well, not a bug in the programming code.

It is a bug in that it is a missing animation which could be truly missing or a configuration problem, so should be reported.
I forked real life and now I'm getting merge conflicts.
Top

Even if they don't have a north-facing attack animation, they should still slide north when attacking to the north, even if the animation itself shows them stabbing to the south...
Author of The Black Cross of Aleron campaign and Default++ era.
Maintainer of Steelhive.
Top

Fixed. Thanks for reporting!

Celtic_Minstrel wrote: ↑April 23rd, 2018, 1:14 pm Even if they don't have a north-facing attack animation, they should still slide north when attacking to the north, even if the animation itself shows them stabbing to the south...

Yes, the only reason I reported it is because I remember it sliding north in previous versions and looking fine despite the lack of a north facing attack. I may just be imagining but I am fairly sure that last I played the Drake didn't go all out against the unused adjacent hex.

And it is not just a minor error that I am being picky about, the first time he attacked there was an allied unit standing next to him and the Thrasher went stabbing into the allied unit instead of the enemy!!

I believe all the animations except the attack in the SE direction are broken but I have not extensively tested. I am happy to do so if you would like.
Creator of: The Reign of The Lords Era,The Gnats Franken Dungeon
Co-designer of the (not-wesnoth) space combat video game Planet Bounce.
Top