This is actually another beta release instead of the first of the release candidates as we had hoped. A rather serious issue cropped up in December, and we had to spend quite a while fixing it. We haven't been idle in that time, however! There have been dozens of bugs squashed and improvements made, and we hope you all continue to test and report back any issues you find.

We've also settled on a tentative date for the 1.14 and Steam releases: April 13th. There are still a ton of things to do, but we'll try our best to make that deadline. To that regard, a string freeze is in effect as of this release, meaning translators will have the next two months to work without strings changing all over the place.

This release really should be the last beta. 1.13.12 is planned for mid-March and will be 1.14 RC1, so as much testing as possible is appreciated!

And finally, we also have a new, very high-resolution titlescreen background courtesy of LordBob!

Read on for more details about the most notable fixes and additions in this release:

Start of the feature and string freeze»
This is not a change, per se, but it is still relevant to players and content creators who regularly use our development releases.

As mentioned above, the stabilization phase of the development cycle begins with this release. In order to facilitate the process for everyone, this and future 1.13.x and 1.14.x versions will only include bug fixes and translation updates.

A couple of additions:
Deprecations and breaking changes
File names in add-ons are now case-sensitive on Windows. They were already case-sensitive on non-Windows, this ensures that a UMC author can't accidentally make an add-on that breaks on GNU/Linux and macOS.
Known issues newly introduced in 1.13.11
Legend of Wesmere has an unavoidable defeat at the start of turn 8 of scenario 3 (#2505, already fixed in trunk).
Top

Great to see a new awesome improved wesnoth version and one more step towards 1.14!!! Congrats to the dev's and team who are all working hard

The new village terrain graphics macro for lighting the villages at night seems to be using exact schedule name(or id) to activate, can it be reworked to filter timeofday=chaotic instead ? as defining and using any custom schedule is going to break it.
Remember, "Nothing flies like a Filburd!"
Top

Eagle_11 wrote:The new village terrain graphics macro for lighting the villages at night seems to be using exact schedule name(or id) to activate, can it be reworked to filter timeofday=chaotic instead ? as defining and using any custom schedule is going to break it.

What do you mean by "break it"?
As for changing the filter:
1. some people will be upset if the lights are on all night
2. as far as I know, the list of IDs is the way it has to be done, at least for now. (https://wiki.wesnoth.org/TerrainGraphicsWML) If you feel strongly about it, you could make a feature request.
BfW 1.12 supported, but active development only for BfW 1.13/1.14: Bad Moon Rising | Trinity | Archaic Era |
| Abandoned: Tales of the Setting Sun
GitHub link for these projects
Top

I'm playing the campaign NORTHERN REBIRTH with BfW 1.13.11 for Windows, difficult level, and I have met some little drawbacks;
I,m not capable to use the appropriate github page so I report them here, I'm sorry

After Malifor is defeated appear this message:

Scenario GET THE GOLD

When the orc leader is defeated appear this message:

My apologies for my english and for my ineptitude to use github
Last edited by Iris on February 25th, 2018, 12:06 am, edited 1 time in total.
Reason: Used [code] to fix an issue with a spurious tag
Top

I'm looking into the NR bugs


Argesilao wrote: ↑February 24th, 2018, 12:58 pm I'm playing the campaign NORTHERN REBIRTH with BfW 1.13.11 for Windows, difficult level, and I have met some little drawbacks;
I,m not capable to use the appropriate github page so I report them here, I'm sorry

After Malifor is defeated appear this message:

Could you clarify this? Malifor is not in the S02_Infested_Caves scenario. I tried that one and S04_Clearing_the_Mines & S05aThe_Pursuit as well & I can't seem to reproduce this.

As for the other 3, I'll have fixes in for 1.13.12 and/or explanations/workarounds for 1.13.11 for them in the next few days
Maintainer of Wings of Valor
My Add-ons: Random Campaign, Custom Campaign, Ultimate Random Maps, Era of Legends, Gui Debug Tools
Erfworld: The comic that lead me to find Wesnoth.
Top

Ops, I confused the caves, are all so dark.

The right scenario was CLEARING THE MINES not INFESTED CAVES.
Top

I've noticed an error with the mountain transitions, which was also present on 1.13.10.

Seems to only affect this particular arrangement of mountains, i.e. a four-hex diamond shape. There are two transitions used for these mountains, one with a peak and one with a valley. It's the latter that is broken; the middle two hexes don't show (or sometimes show but glitch out). But, as you can see, not every 'valley' transition is affected. 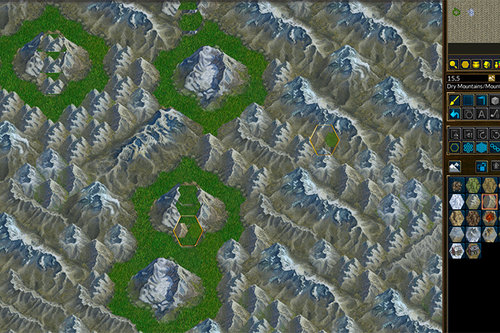 The NR Clearing the Mines bug I can't figure out how to reproduce, as there's only one [endlevel] tag in the codepath for when Malifor is killed. So until there's a way to reproduce it, I won't be able to do anything with it.

for Scenario GET THE GOLD
the cause is the following lines.

if you want to fix your copy before 1.13.12 comes out, just change the 9 to a 5
(\data\campaigns\Northern_Rebirth\scenarios\12a_Get_the_Gold.cfg approx line 569 near the end of the file)
and then restart the scenario.

That bug caused code after it to not run, and that caused the final bug that you reported for S13a Showdown.

These will be fixed for 1.13.12 as well.
Maintainer of Wings of Valor
My Add-ons: Random Campaign, Custom Campaign, Ultimate Random Maps, Era of Legends, Gui Debug Tools
Erfworld: The comic that lead me to find Wesnoth.
Top

In the next days I'll try to play again the scenario CLEARING THE MINES, to see if the error message appear again; eventually I can try to post a game saved just before the Malifor defeat; can be useful?
Top

A save might be useful, though I wouldn't worry about it too much, that bug doesn't affect gameplay. Also, do you have any modifications running along with the campaign? If so, it is possible one of them might be causing the issue.
Maintainer of Wings of Valor
My Add-ons: Random Campaign, Custom Campaign, Ultimate Random Maps, Era of Legends, Gui Debug Tools
Erfworld: The comic that lead me to find Wesnoth.
Top

I can't reproduce the mountain terrain issue Bob_the_mighty reported :/
Creator of Shadows of Deception (for 1.12) and co-creator of the Era of Chaos (for 1.12/1.13).
SurvivalXtreme rocks!!!
What happens when you get scared half to death...twice?
Top

Here's a map file with several instances picked out. Now that I've tried to reproduce it again I think it might only affect dry mountain (Md).