I have noticed a statistics bug in campaigns. Sometimes the calculated average damage of all the players attacks is suddenly reduced by several percent while the actual damage is unaffected which makes it seem like you have had extreme luck.
Top

Custom attack ranges and types can now be translated. To do this for range "artillery" and damage type "explosive", add a top-level [+language] tag to your UMC as follows:

Wait, does this mean ranged units can actually attack from multiple hexes away, and/or there will be splash damage for, say, fireballs (cause that would be awesome)?
Top

No, although this is all already do-able with costum WML code. This means that you could name a range "artillery", "very-uber-far" or "mind-boggling-banana-psionics", and any target that doesn't have an attack with the same range name wouldn't retaliate. But in practice, both units would still be adjacent.
Jazz is not dead, it just smells funny - Frank Zappa
Current projects: Internet meme Era, The Settlers of Wesnoth
Top

StDrake wrote:Been playing around with minimap looks? I'm sorry to say that but it looks horrible, most horrible on small maps - the lines separating columns of hexes are way too visible for comfort

I think there was no statement / change by the developers until now, so I'd like to push this question up. The new minimap is almost unreadable and way worse than the old one: 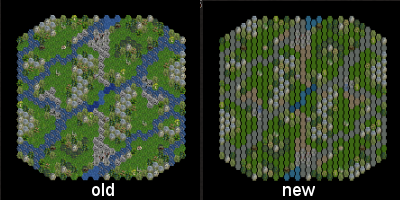 So my question is: Why?

Mainly posting here for future reference. The change was introduced in rev
47967 [1].

The image below shows a screenshot of the editor before (left side) and after
(right side) scaled at 400% using GIMP. The after images look less blurred, and
have 'hard' edges to the background. So I'll restore the previous method, which
looks better on the minimap. 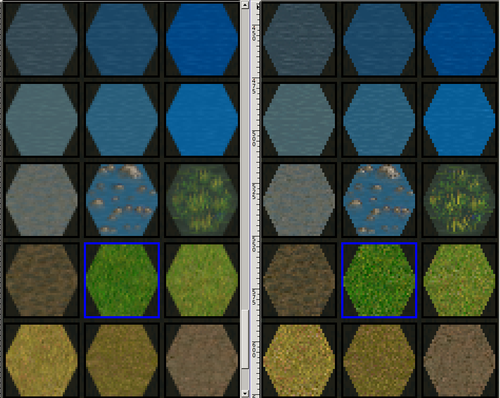