Feedback for the mainline campaign Sceptre of Fire (not to be confused with the Heir to the Throne scenario of the same name.)

Made an campaign-wide feedback for this, I think it's more helpful than feedback on seperate scenarios viewtopic.php?f=6&t=48884 (reposting it on SoF 1 - A Bargain is Struck)
Top

(1) What difficulty level and version of Wesnoth have you played the scenario on?

- Kinda clear. At first I thought I had to get rid of elves myself. Seeing how lava is doing its' job, I didn't bother.

- Very impressive! Despite having some "eh" moments in the campaign, Rugnur's last stand, sacrifice and the outcome of both hammer of Thursagan and Sceptre of Fire is all well done! Along with "Liberty" and "Dead Water", this has to be one of the best endings of Wesnoth

- Keeping Rugnur and Thursagan alive after stepping on the glyph

- Can't think of any

Content Feedback wrote: ↑March 11th, 2008, 11:28 pm(1) What difficulty level and version of Wesnoth have you played the scenario on?

Achieving the objectives is dead easy - just running straight south, fighting the six units that are guarding the glyph, stepping on it, surviving for six turns. Winning the scenario is impossible. And not because the game doesn't offer you a way to win, but because it is scripted that you lose - there is no way around it.

Obviously, misleading. Following my objectives got all of my units killed except Krawg. Was this my objective, really? I can kill all of the elves, but then nothing happens. The only way to arrive to the end of the scenario, and the campaign, is by activating the glyph. Why would I do that? I agree with dahlia:

there was something very funny about killing off every hostile unit on the level and having the dwarves sit around going "Well, we're trapped and it's hopeless, I guess we have to kill ourselves now."

About the campaign in general, I agree with Thrash: Whacky campaign, storyline never came across and was mostly ignored, some strategically interesting scenarios. About the scenario in particular, the dialogue is ridiculous. Are we starting a volcanic eruption before we find a way out, really?

Mainly, the 26 level-3 elves that appear on turn 4. On the other hand, getting your entire army recalled at the start is a nice surprise. My typical campaign strategy is what I call "level-3 hoarding", levelling up units up to level 3, then abstain from recalling them again so I can level up other lower-level units instead -hopefully, by the final scenario which is typically a great battle, I would have a lot of level-3 units, so many that I couldn't afford to recall them all... and then, on this campaign, I got the wish of having them all.

0. This is a game, not a story. Players must have freedom enough to change the outcome. Players ought to get a chance to win. Specially, taking into account that you can be victorious in battle.

Contrary to what the scenario designer thinks, losing is not fun. An unwinnable scenario is a deception, a trap in disguise, a mockery of a game. Should I have wanted a story with a predetermined ending, I would have picked up a book or a film.

Yes, the misleading objectives. First the objective is to explore the cave. OK. Then I find the glyph and the objective changes to go to the glyph. OK. I do it, and then the objective changes to kill all of the elves before they leave the caves. The time is tight, on hard difficulty there are only five turns available, then at the sixth turn an image of an elf appears warning of the imminent volcanic eruption and calling for all the elves to leave the caves, and on the seventh turn the eruption starts and everybody dies. So, I got to think I was losing (my units) because the elves managed to leave the caves on time, so I should manage to kill them all before that sixth turn... I restarted, I managed to do it, and then... death anyway. Killing the elves earlier would not lead to victory, but only to an earlier eruption and death. I even experimented by activating the glyph when there's only one elf left, and then kill it immediately... and, sure enough, immediately the eruption starts.
Top

Would it help to show a narrator message (or the objectives dialog) after the eruption, saying the expected victory condition has happened, and to press "end scenario" for the epilogue?
Top

Perhaps the elves generating event from TSG 8a could be tweaked and added here, so that noone can complain that this scenario is winnable? (Just to drive the point home that this is not an openworld campaign or RPG.)

EDIT:
Perhaps turn it off once the glyph is activated.
UMC Replay Forum
List of all add-ons and (sort of) their status
Mainline campaign feedback
Where I upload Wesnoth streams
Top

7, you need a bit to figure out what's going on and where to find the tablets.

4, honestly. At least compared to the usal clarity.

Finding the tablets and staying ahead of the elves. 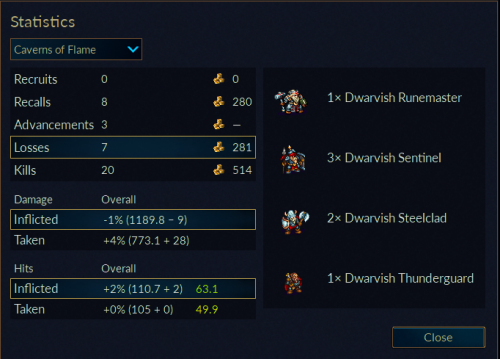 Return to “Sceptre of Fire”