- Nice. Krash returning with his kin was a great twist. Plus the arrival of Hidel (elves) was welcome despite bringing the purple troll to collapse

6. It looked challenging at first, but was actually pretty manageable once the drakes turned up. Had I lost Kresh earlier in the campaign, though, this would've been brutal.

Kresh just casually goes and gets an army to command? What? Why? Is he a drake princess now? Are the white mages princesses too? It just seems like Talinn lucked upon a collection of prisoners who are all secretly really important people.

The trolls laying a trap is pretty cool though. Shows Rashkas as a cunning opponent to lure you in like that.

It got a bit hairy with some of my defence force surviving, but with daybreak and the drakes arriving, it was fine.

6. A good challenge, albeit without much enemy variety.

We've already fought a lot of trolls and could do with a touch more variety, IMO.

The north-west troll is very easy to snipe on turn two, that might be worth looking at.

No.
If presented with the opportunity, I would take great pleasure in becoming a world ruler.
Top

4, you need to defend properly or you will be overrun in moments.

Pay attention to my units so that noone important is in danger.

7, it's amazing how fast units can die and how effective a proper defense can be. 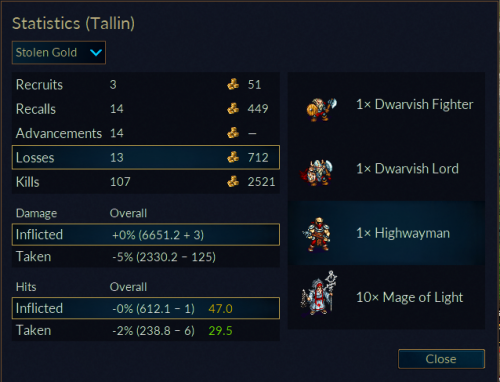 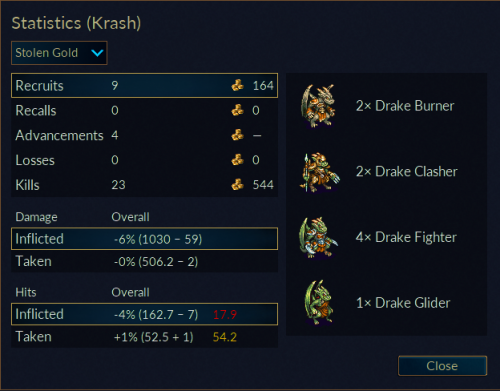 (1) 1.14.9, hard
(2) As with many scenarios in the mainline campaigns, 8-10 if you play it the seemingly obvious way, about 3 once you figure out the quirk in the AI's behavior that makes it a relatively easy win.
(3) Clear enough
(4) Simple and concise
(5) This strategy involves killing the northwestern troll leader as quickly as possible. You can ZoC him on turn 2 with Zlex (assuming he has the Rod of Justice) and Ro'Arthian. Recall only your loyal dwarves initially. They and the units you have from the start are more than enough to clean up the remaining northwestern trolls. Then take their keep and wait there until the rest of the trolls arrive. By delaying the bulk of your recruitment/recalling like this you can gain an extra 2-3 recalls, which will help you rotate your units better and prevent high-level losses.
In the meantime, send your Mages of Light on a village grabbing mission deep into troll territory to maximize your income early. Abhai can grab the villages where Krash is going to set up his keep later, and then just wait there for the drakes to arrive. As long as there's nobody else there, the trolls won't bother going near him, and he's actually kind of useful to have there, to take some heat off the drakes at night.
Once the trolls start arriving, start recalling a mix of lvl3 units and lvl2 units that have a decent amount of XP but aren't too close to levelling — played well, most of them can get 2-3 lvl2 kills before their HP get critically low. Use mostly Dwarvish Lords and Steelclads, though a hand full of the various human archers on your recall list and 1 or 2 fugitives may come in handy as well.
At this point you'll want to have your Mages of Light around, so make sure to get them killed (that's not really hard in this scenario). They probably have even more value as a distraction in this scenario than they do as healers — they can prevent other units from even taking damage in the first place — so make sure the two of them take as many hits as possible.

(6) 9
(7) Keeping the northwestern troll leader from taking a village after his first round of recruitment where he can be ZoC'd by an Ancient Lich and a Royal Guard carrying the Rod of Justice – who in their right mind would do that? Then again, he is a troll... In return, perhaps reduce his starting gold to the point where his trolls can still be overwhelmed with a quick assault by the loyals and a keep full of lvl3 recalls — that way it would still be possible to win by quickly taking and defending the northwestern corner, but at least you'd have to engage in an open field battle with a horde of trolls in order to do so.
(8) Eryssa dying when trying to defend the center of the map.
Top
Post Reply
19 posts