Feedback for the mainline campaign A Tale of Two Brothers.

EDIT: It's amazing how the sun can shine in the belly of that castle.

- Again, simple. Get rid of the dark sorcerer and rescue Baran.

- It's okay. If you want to deal with the start in a diplomatic way, better remember the passwords dark adept has given you the last scenario, but if you want more XP, go on purpose with wrong ones. But I decided to go diplomatic way instead. In older versions, the dark sorcerer doesn't mention anything about the alliance with Tairach (orcish warlord in last scenario), but I like in newer versions how he made that reluctant alliance and reveals that he'll be avenged instead of "No, I die!" Pretty cliche, huh?

- Just to make sure to remember passwords.

- I got none here
Top

3. It was pretty easy and straight-forward, though I imagine that's because I remembered both passwords and got out of a lot of the fighting.


(3) How clear did you find the scenario objectives?

Very clear, although I was expecting the key to have to be picked up, rather than teleporting to Arvith on the other side of the map

The passwords were a nice touch, and really made the scenario have something a bit more unique about it.

The line with the castle being as dark as a cave felt a bit off, can't tell why though.


(5) What were your major challenges in meeting the objectives of the scenario?

None, really. Remembering the passwords, maybe?

6. It's a pretty easy scenario, and that takes a bit of the fun out of it. Ironically, the most interesting part - the passwords - is also the part that made the scenario too easy for me. Nonetheless, it didn't feel cheap winning that easily, because I got to see what I would have had to fight if I just skipped past all of the dialogue.


(7) What, if any, are changes you would have made to the scenario to make it more fun?

A bit more dialogue between Arvith and Baran would have been nice. There's not a huge amount of pay-off on that, though it's not glaringly lacking.

I'd probably make the fight through the castle a bit more difficult, maybe throw in a couple more undead.
If presented with the opportunity, I would take great pleasure in becoming a world ruler.
Top

(2) How difficult did you find the scenario? (1-10)
10 - Hardest in the campaign. I think you need either a well built army or a good deal of luck to finish it.

(3) How clear did you find the scenario objectives?
Obvious, save that only Arvith can free his brother.

(4) How clear and interesting did you find the dialog and storyline of the scenario?
I think it's fine as is. Except Arvith makes a funny comment about supporting his troops on the front. It was funny because at that point most of his army was a turn behind him, for I had used him for scouting.

(5) What were your major challenges in meeting the objectives of the scenario?
Scaling the walls. Orcs wait at the bottlenecks, which slows down dispatching them. Although this lets you seize the best terrain, keeping it at night may cost multiple units, especially if most of them are still lvl 1. By the time you are finally getting rid of orcs the undead arrive. Luckily I had hired extra footpads in anticipation of them. Vague memories from previous play on easy helped in finding Baran and defeating the undead. I still lost a loyal knight but gained another and Arvith leveled to Paladin.

(6) How fun do you think the scenario is? (1-10)
9. Despite all difficulty this is the funnest scenario in the campaign. I think the passwords contribute to it a lot.
The difficulty actually makes you think that this is the last scenario, if you don't remember how many you have played already. So you have a feel of finishing the trouble, which gives strength and hope.

(7) What, if any, are changes you would have made to the scenario to make it more fun?
Maybe just prompting whether you want to give the password would be better than forcing memorization. It will be harder for players that keep a pause before this scenario. I just remembered that there should have been a treasure somewhere but I missed it, probably because I remembered where Baran was. Maybe the castle should be mirrored randomly so you can't just walk to him directly.

3, if you know the passwords.

Baiting the orcs during daytime. 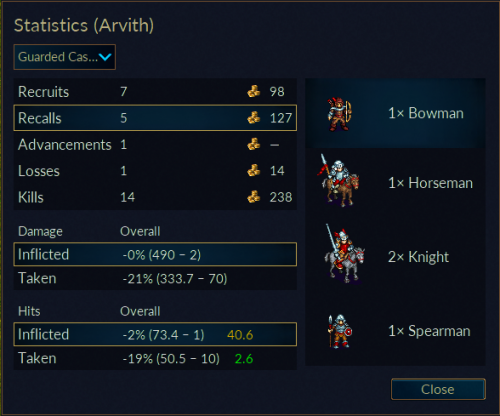 1. Wesnoth 1.15.7 Challenging
2. 5
3. crystal
4. Funny since the guards just left without even asking who I was when I gave the passwords
5. Getting past the first vanguard at the castle gates
6. 8 (It's not every day you get to raid a castle)
7. Can the side 2 leader's type be varied on difficulty? Dark Sorcerer on Easy and Necromancer on Challenging?

Nothing much. I gave both passwords and approached the enemy leader with caution, not giving him any chance to kill any of my units.

I can't think of anything.
Top

2. Difficulty depends on whether you choose to fight the extra sets of guards. If no, probably very easy 2 or 3 out of 10 perhaps. If yes like I did (both sets), 7/10 at least. The time limit is extremely tight, and the unit composition of the undead (read: number of ghouls) matters.

In fact, I restarted this scenario twice because of the time limit despite knowing what was coming. Both times were because I beat the initial guards and orcs, but my army was all at red HP between general retaliation damage and the ghouls' poison. Perhaps not deliberately fighting the extra guards gives a more reasonable difficulty, hm?

3. Objective: "Rescue Baran" is fairly vague. After defeating the dark sorcerer, moving Arvith to the cell door is OK with the 6 extra turns, even if he's somewhere remote.

4. Dialogue is still written well for the scenario, in terms of language. It's still not clear why the enemies would keep Baran alive for a while, or why necromancers would be afraid of orcs (or work with them, or go to the trouble of wreaking havoc in the countryside, or be in any position to offer a bargain to the elves in the previous scenario...) It seems like an attempt to spice up the otherwise formulaic "You. Enemy. Kill." setup, but there are some plot holes. I don't remember the scenario intro from Rotharik's journal being that well-written. It seems better now, or it might just be my memory playing tricks.

5. Challenges with the scenario? *snip* Hahaha who would be silly enough to fight both extra sets of high-levelled guards? That would be silly. I'll just leave these two bits that still apply.

- Lack of healing. No healing units (excepting the Paladin, if you have any) and 2 villages in the vicinity of the entryway is all you get. If there are more ghouls, it becomes very irritating to proceed down the hallways - and even without being poisoned your army would be wounded from fighting the other guards. There is simply no time to stop and heal - level-ups are the best source of sustainability here. This is less crippling if you don't fight the extra guards, and it in fact becomes a nice challenge.

Giving the right passwords to avoid the initial guards removes all the difficulty. Story-wise, it would make much more sense to just remove the password prompting and proceed with the scenario sans guards. Gameplay-wise, the prompts pretty much amount to a difficulty selection: Would you like an easy time, or a very challenging time? And if you don't remember the passwords (e.g. play the campaign over a couple days), the default seems to be "very challenging."

6. Fun? Fun is not really to be had here for me. Without extra guards, a 2 or 3 because of the amount of ground to cover and lack of enemies. With extra guards, the same because of the tight turn limit. It's better now, in particular due to the map change - the lair is now actually "underground" (well, it's called indoors) and adding the illuminated tiles by the torches is aesthetically and game-play wise more fun.

7. Changes I would like would be to remove the password selection (maybe one group of guards could return after a few turns upon realising they had been tricked, to make it more interesting), and to basically rework the map - smaller castle, and a few more villages outside. The password selection I still have doubts on. Nice touchups on the map, making it more interesting than before.

(1) What difficulty levels and game versions have you played the scenario on?
1.16.2 Challenging
(2) How difficult did you find the scenario? (1-10)
2 if you use all the passwords. 4-5 if you don't.
(3) How clear did you find the scenario objectives?
Very
(4) How clear and interesting did you find the dialog and storyline of the scenario?
I like it. More build up about the drama between the brothers, actually a little pathos for the necromancer who is already having a bad day when you show up.
(5) What were your major challenges in meeting the objectives of the scenario?
Healing. Few villages and far between, so you have to make judgment calls on when to retreat your units.
(6) How fun do you think the scenario is? (1-10)
5. I really like the option of using the passwords or not. It gives the player more control over the difficulty level and increases replayability. So newer players can use all the passwords and have fun with less stress, while more experienced players can dramatically increase the challenge by intentionally giving the wrong passwords.
(7) What, if any, are changes you would have made to the scenario to make it more fun?
I like it as is

Return to “A Tale of Two Brothers”