Forum rules
Before reporting issues in this section, you must read the following topic:
Post Reply
5 posts • Page 1 of 1 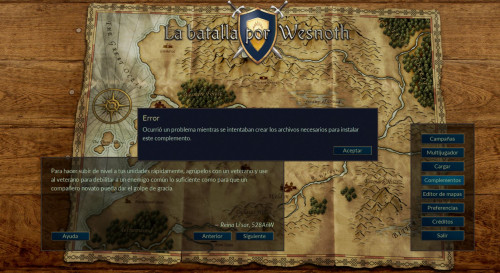 Happens every time I try to download some UMC.
Version is 1.15.4, Steam.
You know, it says that there was some kind of problem while trying to generate the required archives for the complement. Tried with a few UMC, same results.

Sometimes I don't have problems at all. Idk if it's something related with the newest version, because last time I tried I downloaded some campaings.
So what's happening?
Thank you in advance for your attention. (:
Top

About the version info and such:

: iostream error"
So basically I tried to: download some campaings, ie. "Antar, son of Rheon", "Bad moon rising", "After the storm", and maybe one more, just for the try, all with the same problem.
The download bar fills, but then the message appears.

Also I tried to launch "To lands unknown", which I had already downloaded from some time, but it didn't run. It just says "Fail to load scenario". Don't know if it's related.

Nice. I just had to disable OneDrive. Now my Wesnoth is fine. Thanks for your time.
Top
Post Reply
5 posts • Page 1 of 1