The Rise of Wesnoth

This is the place for discussing development of mainline campaigns, reporting bugs in them and providing overall feedback.

Why do you really want to spell it out and leave nothing to the imagination
of users and possible campaign designers?
I mean you can imagine that ending (which is the most likely one), even look at the hints
in the campaign itself ("we" have work to do) or any of zillion other possible ones. And yes
, one could do a pic with H&J looking at the sea together or something as a closing one. You could do it and submit it if you wish.

As for your other concerns, H&J have a million concerns in their head; what good does it do
if the other is feeling well and they fail?
Top

Velensk:
I don´t know...
I´ve played almost every campaign of Wesnoth. In fact I thought a lot about not even posting here in the first place. However I decided to post anyways since I really really wanted for this campaign to be changed. I don´t mean to hurt anyones feelings, I love this game, especially the heir to the throne and the northern rebirth. I just wanted this campaign to feel the same way and it doesn't.
Top

Santi:
I don´t know how to best show electricity or affection between two couples. There are so many different ways of doing this. H&J could by all means react and act towards each other the way they did and still have a great many feelings for one and another. However there´s a certain coldness between them and it's to easy to pick up on this coldness. There's not enough warmth to counter it and I believe it would be easy to change. Perhaps just a few well written lines delivered at the right spot or the picture I mentioned before. Ofcourse talking about a picture and not being able to produce it, makes the entire critique somewhat blanque, I admit. I wish I was an artist. However I'm not. My only gift is writing and mostly in my own langauge. If I had made you a picture, I wouldn´t even bother writing about it, I would have argued for you to use it instead. Which ofcourse would have made most of my comments completly unnecessary.
Top

Diendiadre wrote:Velensk:
I don´t know...
I´ve played almost every campaign of Wesnoth. In fact I thought a lot about not even posting here in the first place. However I decided to post anyways since I really really wanted for this campaign to be changed. I don´t mean to hurt anyones feelings, I love this game, especially the heir to the throne and the northern rebirth. I just wanted this campaign to feel the same way and it doesn't.

I don't think anyone is offended. What I think, is that Wesnoth (or to a certain extent the people who would make wesnoth campains) are ill-suited to representing the things you seemed to want (or writing them). You mentioned that the romance in NR felt more livly to you, but to me I don't realy get a feeling of livieness from any of them (and was annoyed by the characters in NR), you can only do so much with little text windows.

Keep another thing in mind: In the minds of most campain writers, story is an excuse for gameplay. You mentioned that you found the bit where you go into the sewers to fight the two brothers sad, but consiter it from the creators perspective.
-alright, so they're in the sewers it would be the shame to let the oppertunity for an underground senario go to waste-
-so... what would you be fighting in the sewers-
-it would have to be something that won't be a blow-over for the players army which should have many high lvl units by now, and it would be nice to do something unique-

You get the concept of the fight from there. I'm pretty sure the creator didn't have a major story reason for the fight, though he made use of it, by having them detect the ruby of fire. Most of the fights are like that. You could realy skip most of the fighting, but if you did, then the campain would be allot shorter, and I imagine the campain was created with the intention of being long so that they could do the grand finaly at the end (amoung other things)

Also because wesnoth is pretty much designed for fighting, and not much else, if you want to have a senario where anything happens, it will probably be a fight. There is that one senario where you are supposed to not fight, and as such it is incredibly boring, especialy if you manage to go the whole 40 turns (which is possible and involves allot of waiting for your enemy to finish moving so that you can end your turn again).

As a final point, the romance is not essential to the story (infact for pretty much all wesnoth campains it isn't). You could easily take it out and have the same story (not saying this is a good thing), as such any time spent on the romance is flavor.

All that being said, I'm sure that the lines could be written better. If you wrote better lines yourself, they might be used. However I think that most wesnoth players, are either very indiffrent to the romance, or might be even a little annoyed at it taking up time when they could be playing (I fall into the former kind).

EDIT: looking over my post, I realise I talk for many more people than I should. Rather than edit the enire post of every instance, I'm just going to say that I'm using an educated guess based on my experiance with the game and players.
"There are two kinds of old men in the world. The kind who didn't go to war and who say that they should have lived fast died young and left a handsome corpse and the old men who did go to war and who say that there is no such thing as a handsome corpse."
Top

Is this still the correct place to put a bug report? In 1.7, TRoW scenario 16 (the Elven Lords) causes a segmentation fault.

EDIT:: Also, on the subject of writing not being a major concern of campaign designers: Completely true. Neither was art, in the beginning. That is why the Art Contributions forum was made. And now there's a writing forum, too! Go there if you think you can make something better!

Where is situated Ka'lian? Because on that page http://www.wesnoth.org/wiki/Geography_of_Wesnoth we can read: "Wesmere: The location of the Ka'lian - the Elvish Council ". In that campaign instead Ka'lian is set in Grey Woods. Is that a mistake or did the Ka'lian changed location after "The rise of Wesnoth"?
Top

Should not be grey woods
Top

it is.. here the map 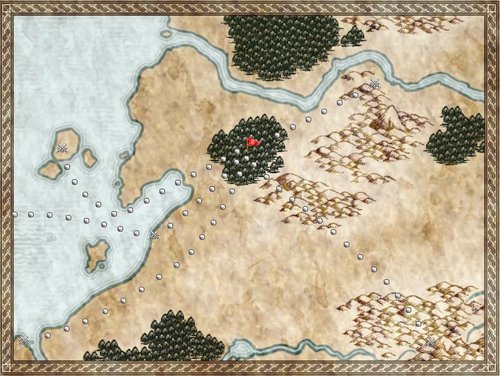 In version 1.9.2 I get this error when trying to start the campaign in easy:

It works fine in normal or hard difficulty though.
Top

deathmothon wrote:In version 1.9.2 I get this error when trying to start the campaign in easy:

This is an excellent campaign under 1.9.3. The updated artwork is orders of magnitude better and helps immerse the player. I love the flying skull "familiar". I think Lady Jessene referred to it as a bat once, which must be a leftover from before and should be fixed.

I am fine with the hookup. It was obvious that Jessene was flirting for a long time in an aggressive tomboy fashion.

The players need gold for the first scenario after the four quests, The Vanguard. It would be a huge pain, but I suggest reducing it to three quests, removing Cursed Isle from the three but having it come just before The Vanguard, with some excuse for its necessity.

[Edit: Or better yet, have the ass elf, the one with the dragon quest, offer to sweeten the reward with "countless wealth" on top of everything else if the player completes all the quests - or the final quest, if he says it just before the last quest. And then have the reward be 100 gold (or 150 if there is a carryover hit), with Haldric and Jessene muttering between themselves but having to say "thank you very much" to the stingy, backstabbing elves. It would also motivate Jessene's spying on the elves.]

The player also needs gold for the last scenario. Maybe boost the minimum to 300 there?

Also, there should be a strong hint not to try to kill Lady Outlaw when you are given the choice. Can you imagine playing the campaign without her and the outlaws?
Last edited by Maiklas3000 on January 14th, 2011, 12:30 pm, edited 1 time in total.
Top

Spoiler:
If you kill her, she comes back after getting the ruby. Still a bad idea to kill her though, as you can't get her advanced.
Projects: Ice Age Fun, Japhel's Journey (same link), Shameless Crossover Excuse (Maintainer), and Age of Dinosaurs!
Is cothabhálach an aistriúcháin Gaeilge mé.
EXTERMINATE!!!!
Top

while checking out the wml for 'clearwater port' i noticed a minor speaking event that did not take place in my game.
the angry peasant never says his line "You killed my family! Die!".
there are only two places the error could occur (i think. i am a noob to wml):

i assume the problem is with the event itself. should the filter read 'id=angy farmer' (since they are NAMED_LOYAL_UNIT)?
well just thought i would bring it to your attention as it is nice scenario flavor text and i would have laughed at hearing it while playing.
Top

Good catch, thanks. The most straightforward fix was to replace speaker=Angry Farmer with speaker=unit.
Top

some minor things.
lady jessene's last lines should have 'lightning' not 'lighting' (last thing she says in the epilogue).
in the wml event when the nagas appear (battle of wesnoth) it has lines allowing side 3 (the sea castle orc) to recruit nagas, which he has already been doing the whole scenario (so it doesnt really matter, and quite frankly i prefer the nagas to the damn bats).
and lastly who the hell is 'sir ladoc'? did i miss this charactor or was it removed? i tried searching the wmls of most all the scenarios to see if i could find his first appearance to no avail (though in most all of these there is a /recall 'sir ladoc' line).
anyway great campaign, very well balanced, though there were some weirdnesses in the story, nothing that made it fail.
and a good time was had by all...
Top
Post Reply
475 posts