I'm playing Son of the Black Eye on Medium difficulty. Playing The Silent Forest, I recruited and recalled more than my villages could support - and I needed those troops too, I would say - so I made it to "Shan Taum the Smug" with the minimum initial gold. I went for a combination of recruitment and recall, since I felt like I needed some stronger units (especially Trolls) to hold against the enemy Orc leader's attack. Well, it's not really working out. Perhaps I've been too spoiled with high starting gold in each level when I play campaigns, but it seems that I need more troops than I can muster: Either my defensive line is too thin and some units are surrounded and dispatched, or it doesn't extend far enough Northward and Southward. This is particularly painful when the Ogres join the fray, and I just don't have enough muscle to handle their massive HP.

So - what do you suggest I do?

* I _have_ looked at the Walkthrough, and actually it was what I was trying to follow, but like I said I'm having trouble with that approach.
* If you tell me to poison units - that's not very helpful. First, the level is crawling with villages, and second, an Ogre takes 5 turns just to lose half its HP, which still leaves it with plenty.
Last edited by revolting_peasant on June 5th, 2018, 10:20 pm, edited 1 time in total.
Top

I have a replay from ... way back: Wesnoth 1.11.9 (1.11.8+dev, actually) where I start with minimum gold (which is expected in this scenario, I think). In fact, at that time starting gold was 150, as you can see in the replay, but we decided that was too hard so we increased it to 200 afterward. If you still have and old copy of 1.11.9 (or something close to that), or are able to install multiple version in parallel, I've attached it below.

If you cannot watch the replay, well, you want to hold the water front with mostly high level units. I think this is one of those scenarios where you'll just want to put a lot of firepower on the front line. You'll probably get flanked a bit and will lose a few L2s and L3s here, but hopefully you'll have enough by now that that is not really a problem. I've also attached a couple screen shots in case you cannot access the replay. They show more or less how I positioned my units. Sorry that I don't have anything more recent, hope it helps anyway. 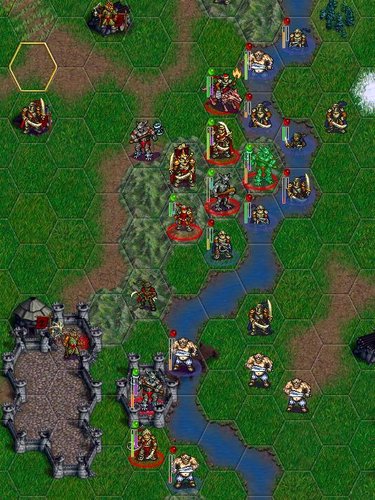 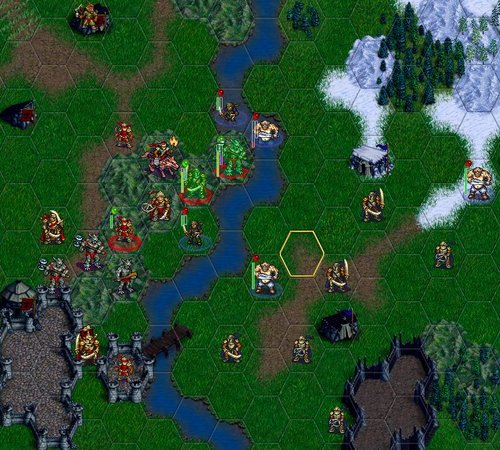 Yeah, this is one of the harder scenarios in a pretty challenging campaign. Don't bother recruiting fresh troops, they wont be able to do anything here. Just recall as many as u can - mostly L3's and L2's close to leveling. Go for high hp units like Orcish warlords and troll warriors, and 1 pillager to slow ogres. I mostly use troll warriors because their resistances and regeneration make them amazing for defense. Try to cycle out wounded troops, there are plenty of villages, but be prepared to take some losses, its expected in a scenario like this. Holding the river bank is key.

edit: cant find my replay file. it probably got wiped when i reinstalled windows.

there is a way to win this scenario 100% of the time. recruit around 90% or 100% trolls. Bring your entire army immediately North. hold the edge where the hills and the snow meet. The enemy will be fighting your 50% defense trolls from 20% defense.
Top

I'm also playing SotBE at medium at the moment, and it's quite challenging for me. The approach "just recall as much lvl3s as you can afford" didn't work well for me, perhaps because I don't have unlimited amounts of Lvl3 trolls and warlords in my recall list.

I did win this scenario though, with a mixture of high level hitters and lvl1 baits to fill the lines. First recruits were just one lvl3 troll, two wolves, two whelps and one archer. Next turn I recalled a pillager, two crossbows, a lvl2 troll and another lvl3, if I remember correctly.

While the shamans went for the villages in the local neighborhood, I sent the wolves north and south to get those a little bit more in the distance. The pillager and one lvl1 wolf even went to the far south east to steal those villages.

Now I used my big hitters to block the bridge and hold the riverside south of it, concentrating on archers first, while my own crossbowmen sneaked in between and shot some ogres. In the hills to the north I mostly positioned the lvl1 cannon fodder, just to be annoying and stop a couple of opposing units in their tracks for a while, so that they didn't go after my valuable units all at once.

With all the villages and not so many high level units, I got a positive income stream which allowed me to recall additional high level units about every second turn. After a while, the opponent's troops couldn't sustain any longer and I was able to sweep over the plains and overthrow Shan Taum round about turn 16, with about 100 gps additional cash in my bank account.

Lost almost exclusively lvl1 fodder. Don't forget, that you can use your shamans as well. Although they're extremely fragile, all three of them can easily bring down an ogre at night with their range attack, as long as you're able to protect them afterwards.
Top

mattsc: Should I try to hold the _entire_ water front, all the way south? Your screenshots don't show what you've done in that part.
Top

revolting_peasant wrote: ↑
April 21st, 2018, 8:46 pm
mattsc: Should I try to hold the _entire_ water front, all the way south? Your screenshots don't show what you've done in that part.

revolting_peasant: No, I had no units south of there, the screenshots show pretty much all the units (except for maybe a couple in the west, healing on villages or just staying out of range). You'll probably have some enemies flank you in the south and north with this setup, but as long as you keep them on the flats (for the most part), they are still on bad terrain.
SP campaigns: Galuldur's First Journey (1.12 & 1.14) & Grnk the Mighty (1.10 & 1.12)
AI experiments: Micro AIs (wiki, forum thread, known/fixed bugs), Fred, AI-demos add-on
Top

On what difficulty level were you playing this level, by the way?

At any rate - your suggestion got me through the level! The key points which worked for me:
To be honest, I did reload a couple of times when my Shamans were dying, but still.
Last edited by revolting_peasant on July 15th, 2018, 3:36 pm, edited 1 time in total.
Top

That's strange. When i'd played this campaign, this level wasn't very difficult. A lot more harder levels for me were defeating this smug second time (where he was with 2 partners), and Silent forest. Btw i've chosen medium skill too.
Top


To be honest, I did reload a couple of times when my Shamans were dying, but still.

Yeah, unfortunately they are very squishy. You really have to take care that, whenever you use them, there'll be no one around to retaliate.


trickitiki wrote: ↑
June 6th, 2018, 10:37 am
That's strange. When i'd played this campaign, this level wasn't very difficult. A lot more harder levels for me were defeating this smug second time (where he was with 2 partners), and Silent forest. Btw i've chosen medium skill too.

It depends. Silent forest is difficult, but you may be able to get gold carryover from the scenario before, and then it's pretty straightforward. Recruit and recall as many trolls as possible, hurry up and punch the elves. Shan Taum is the following scenario, and you're very likely to start that with minimum gold. If you've got enough lvl 3 trolls, fine, go ahead, just crush the opposition. But if you're forced to use a couple of lvl 2 units—as I was, because I lost two lvl 3 trolls in the silent forest—you can run into trouble. With just the minimum number of units, it's pretty difficult to hold the river on its whole length. Sooner or later the ogres will kill one or two of your lvl2s, others have to retreat to heal, and you can't recruit reinforcements, because you already ran negative on gold. At least that's what happened to me on my first try. And then you either have to retreat further back and run out of time, or take more risk, get flanked and probably lose a hero or shaman.