Delfador's Memories - Terror at the Ford

Delfador's Memories - Terror at the Ford

I recently abandoned the iPad app and started playing Deflador's Memories on medium with 1.11.0 on Windows. Finally made it into Elven Territory and now I'm wondering which units I should aim for.

One of my "problems" is that I'm having a ton of gold, like really a ton of gold, so I'm starting to worry that I may have finished previous scenarios too quickly.

I had about 400 gold at the beginning of Wasteland, then only recruited one single keep, quickly took my ally's villages and finished early after leveling 6 of my units.

Because I already had two Ranges and a Marksman, I decided to send them west together with a Druid, an Elvish Rider and a Shaman to assassin the Orc Leader. My plan was to sacrifice that Rider on a suicide run to provide a distraction if necessary - but I didn't have to, moving along the northern board edge, hiding in the woods worked out perfectly fine. I only stepped out into the open when it was already too late for his army to turn back, he died in turn 9

Is this a good strategy? I'm basically giving all of my lvl 2 units very little xp, but also felt like I need the firepower to actually take out the leader.

I only recalled a single keep, my 7th unit was an about-to-level Scout and I sent it straight down south, following Delfador and Chantal who already took off in that direction right after recalling.

Once I reached the northern shore, I freed the guard, sent one down to wake the mages and had the rest turn back north. Then, I had Delfador fill the empty spots in the walls with fresh cannon fodder, mostly Elvish Fighters because they're cheap, some Archers and a few Shamans which I eventually leveled to Sorcerers.

Then I completely abandoned the southern shore, though the mages didn't get very much action during the battle. I killed most of the Deathblades with my HI's and the undead force with my newly leveled Sorceress'es, using level 4 Delfador primarily for leadership. And I mostly used the lvl 1 guard as cannon fodder, both as a distraction and to block castle tiles that would be impossible to defend (bottom down next to the water when it's already surrounded by enemies).

Some of my tactics worked surprisingly well, for instance sending a Fighter and a Bowman to attack a Bone Shooter outside of my castle walls in the middle of the night, then sending another Fighter out just to stand there. At this time, 4 Revenants had already penetrated the castle walls. Luckily, all 4 of them jumped outside as well to kill them, I quickly killed the two Deathblades that were left inside and reinforced my castle defense.

But I also got very lucky a few times, like where my Shaman got deadly wounded, but barely survived after getting just enough xp while defending to almost level. And the AI also lost when attacking a wolf rider with a Revenant - I had sufficient units in range to safely deal with that wolf, just absolutely nothing to take on that pierce resistant Revenant.

At the end, I finished with this: 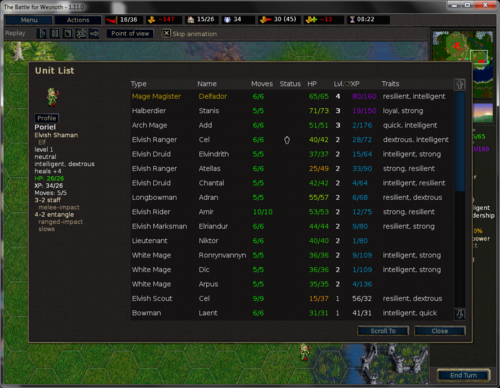 Is that a good enough roster or should I have better aimed for a few more lvl 3 units instead of so many lvl 2's ?

With the early finish bonus, I'm starting The Return of Trouble with 448 gold, which isn't that bad ...
Top

Re: Delfador's Memories - Terror at the Ford

Ok, so that unit list is also completely screwed up (http://forums.wesnoth.org/viewtopic.php?f=4&t=37886)