A Strategy Guide for FFA Games

Does a lot of this advice carry over into 6 player conquest games, with randomised starts, where you trade villages and also have non-agression-pacts for specific areas of the map? Or is that totally different?
Top

Well well, I guess none of you expected a real update on this thread from me, but as it happened we did have a quite nice FFA match recently.

It's a demonstration of the effectiveness of harassment, but it also shows how crucial situation awareness is ... for which you either need FFA gut feeling or lots of scouts.

The match I am going to analyze was played by awaw (red drakes), akalabeth (blue northies - usually I wouldn't try to play FFA's with unknowns, but it turned out this time), me (with green northies, and yes, I chose northies to go with theme of the starting position and the color), Training_Dummy (purple drakes).

Opening
The first turns are pretty much standard of course, village grabbing etc. Purple and green go scout-heavy, whereas red relies on fast fighters. Blue goes with a diverse recruit instead.

But there's one thing that stands out ... can you spot it?
Turn 4 screenshot: 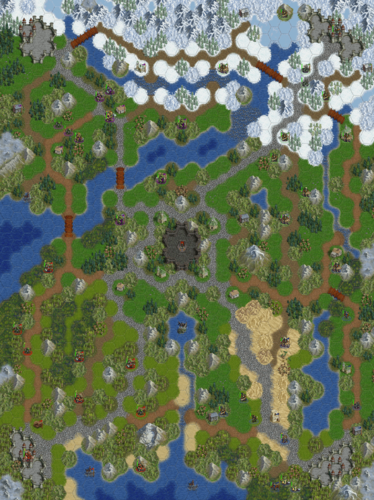 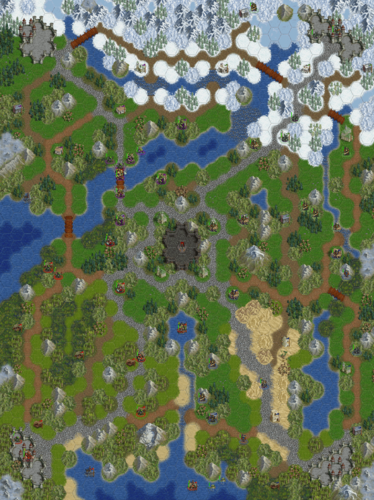 Yep - it becomes interesting. Red is the first to see the purple leader moving towards the center. The timing is perfect though, as the drakes arrive in the center at their preferred time of day. Also, during the early turns one will mostly encounter scouts in the center - nothing that would scare a drake slasher.

It will be quite educational to see the response of red and green in the next few turns. Blue only moved the scout towards the center now, so he will see the purple leader only *after* both sides moved their units, effectively meaning that blue becomes aware of the situation one turn later than red and green.

Meanwhile, green is able to scare blue away from 33,19., making this the first village steal in this match. If you watch the replay you will notice that green made the mistake to not scout the center before moving the bulk of his units. Throughout the analysis I will point out the situations where better scouting/better game sense would have lead to very different decisions, though I will not attempt to predict how those decisions would have looked like. It is left as an exercise for the enthusiastic FFA scholar.

Transition into midgame
Turn 6 marks the transition into midgame, all villages are occupied and fighting is about to begin. After recruiting in the center, purple feels that some units could be moved back to defend the hinterland, as red and green are invading with small harassment forces.

I would like to point out how this is a traditional silent diplomacy game - our own FFA codex forbids it to use secret channels (of which there are plenty) for diplomacy. Everything happens on the board, visible for everyone. Under such conditions, it is not very effective to forge secret alliances if the nemesis is "eavesdropping"

Which effectively means: diplomacy happens indirectly (or "silenty", as no chat is needed), simply by unit positioning and gambits. Most people new to FFA don't believe that this works, but let me assure you: it does.

So if it seems that red and green have a secret alliance, then it is not true. What you see is a temporary agreement that purple needs to be punished for climbing the throne so early. Also notice that a secret alliance between red and blue would have been more effective at this point.
Last edited by grrr on April 7th, 2011, 10:03 pm, edited 1 time in total.
Top 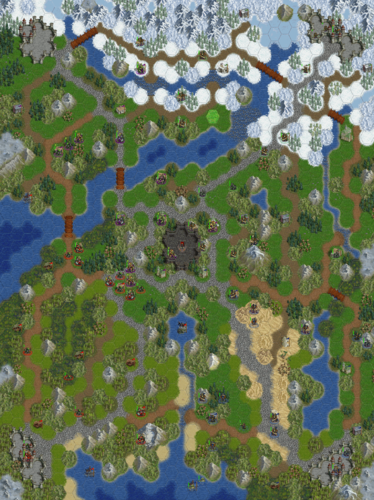 Red is provoked when purple steals 12,21. The response follows immediately. Control over that village becomes the first schwerpunkt in this game. Notice how blue did not scout the situation developing south-west of the center.

Green is tempted by purple's leader move, but what is there to gain from trapping him? It's bright daylight and purple is able to break the blockade with ease. The answer lies in the meta game: Green invests 12-17g in order to allow red to continue the assault (notice in the replay how green first spotted the south-west situation before going for the blockade). The assault will bind most of purple's forces, and green hopes to get easier access to purple's hinterland. It is not the aim of green to attempt a leader kill here, as this would help red and blue too much, with green carrying the assassination costs in any case and therefore most likely earning him a silly 3rd place. 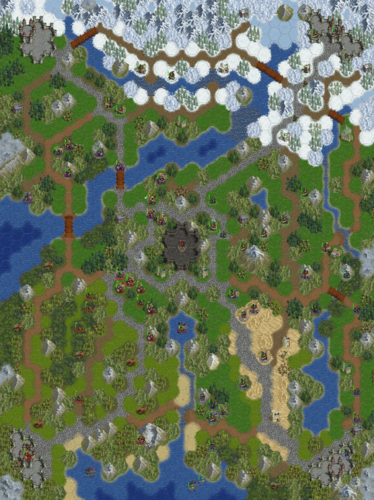 With only 6 villages left purple decides to retreat from the center - the harassment of red and green proved to be too effective. So far, green did not attack a single unit of purple. Economically, the center push was a failure, as both red and green (apart from turn seven and eight) had better income than purple.

Due to poor scouting, blue actually missed the chance to go for some of red's villages: 9,35 but also 14,30 would have been easy targets. Now that purple has been chased off the center, this window of opportunity is slowly closing again. Blue instead decides that capturing the border villages of green shall become the second schwerpunkt of this game.
Green gets a luckily kill against blue's assassin but at the same time does a silly positioning mistake in the north, with the very valuable strong/resilient dog at 14,10 (which, really, should be sitting on the top of the mountain). 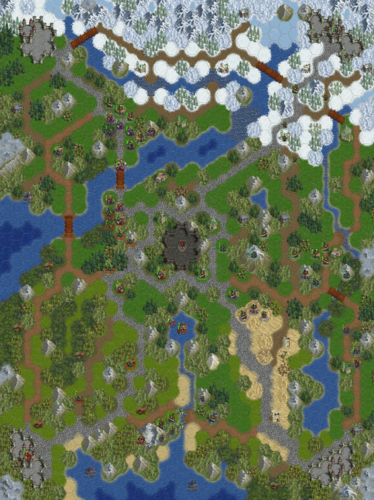 Purple is by far the weakest player now and will continue to lose more units. Interestingly enough, neither red or green can be interested in a too weak purple player at this point: It could lead to a direct engagement, probably handing the game to blue (who has the second-largest army after green).

Blue, unaware of what's been happening to purple (he can only guess but doesn't know), does not realize that red is still heavily committed towards the north, thus allowing for some easy village captures. He has the second-weakest income (half of what red makes, and only one third compared to green).

Blue chooses to go against green instead (who's currently strongest). That's a good idea considering the overall game situation, but nothing that blue could hope to win, nor is it a fight that would improve blue's situation. The aggressiveness of blue's assault takes green by surprise though. Green's response is a tactical blunder - he gives up control over the mountains at 34,20 and will never be able to get it back. The village at 33,19 becomes nearly impossible to defend due to that. The fight over that village will continue until the end of the match.

In turn 12, red easily repels an almost desperate counter attack from purple, being nearly uncontended in the center now. Blue also abandoned the idea to cross the river into red's terrority, so red's situation starts to become more comfortable. Green continues the fight with green even though a more rational decision would have been an ordered retreat. Here is why: it's the length of the supply chains. A fresh recruit from green's keep needs 4 turns on average to reach the frontline, slow gobos even 5 (and notice how gobos are apparently a deciding factor in green's unit composition). For blue, it's only 3 turns. This partially explains why the fight is so difficult for green to get under control, despite superior economy and army size.
Top 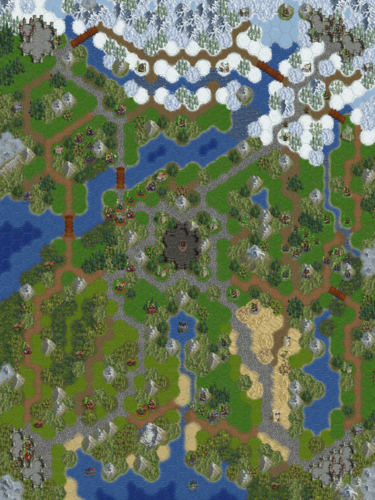 Despite a fairly successful assault, blue continues to lose in the economic game, now at only 7 villages. Green's counter-attack on blue, onto an entrenched position, is going to cost green the lead. Had he only scouted better, he would have realized that he needed to stage a counter-attack towards the center this upcoming night.
Purple is in an atrocious position, but should be able to reclaim his homeland eventually, now that no ones care about him.

In turn 14, red prepares to take the game, profiting from the civil war in the east. Green's army is still the largest in the game, although it includes 10 gobos at this point.
Purple's leader finally reaches home, recruiting for the first time in 7 turns.

In tun 16, red controls nearly half of the villages now. Blue, realizing that the assault on green is futile, tries to steal 14,30 from red, but it's too late to be effective.

The longest day
In turn 17, green tries a counter-attack on red, but didn't get lucky enough.
Turn 18 screenshot: 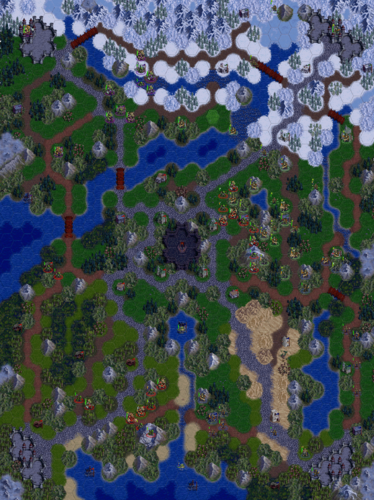 And thus the longest day begins. The control over the Ardennen has become the final schwerpunkt of this match. The red/blue skirmish in the south is meaningless.

Only one turn later, and one can notice how green's army is melting away quickly, unable to gain any ground against red. So green goes into a full retreat. If he had managed to actually harm red, then the wisdom to let purple live would pay off now: purple's brave warriors are prepared to engage red, once more!

With turn 20, it is evident that red wins because none of the other parties are strong enough to start a fight with him. The civil war is *still* going on (which is really rare for FFA, simply because it's not effective for either side).

Purple was waiting for the help of green, to fight back red, but green didn't feel like fighting, after paying such a high blood toll to red.

The match officially ended in turn 23, with awaw being declared as the winner.

For those wanting to see how the game developed in numbers:

Very nice, good details, I'm not only seeing this as a FFA guide but as a journal! It's fun to read to see how an experiences wesnoth player observes.
”Rise, adept, and tell me about the enemy.”

You are a Horseman: you charge ahead without thinking of the consequences.(80%)
Top

After reading through this article i now feel like playing a ffa... once i have that time spare

Yes i made this avatar... and yes i play drakes.
Honourguard of the Draconic Sons and Artist
Top
Post Reply
36 posts