nemaara's art (and other art for Genesis)

Forum rules
Before posting critique in this forum, you must read the following thread:
Post Reply
94 posts

Well, for the time being, I'll ink the current ones, and post them as soon as possible.

Coloring is going to take a while, and i won't be able to get started with it until after transfer the files (I'll be posting the finished shadow mage portraits at the same time).
Top

Okay, there are the inked sketches:

Spoiler:
Red Demon/Demoness. Aside from minor corrections, these are mostly the same as before. 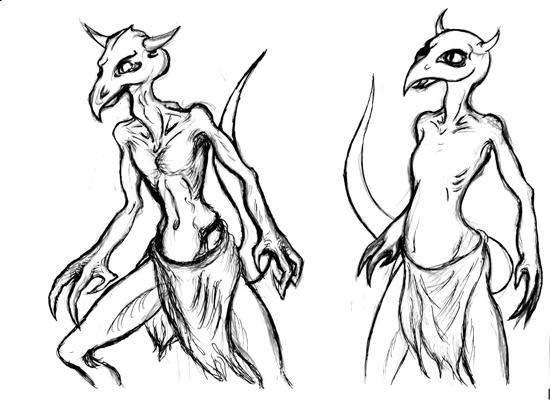 Blue Demon/Demoness. Adjusted details based on input. Removed faces and made them more, uhm... "stuff"-like.
Also a convenient excuse to not draw hands. 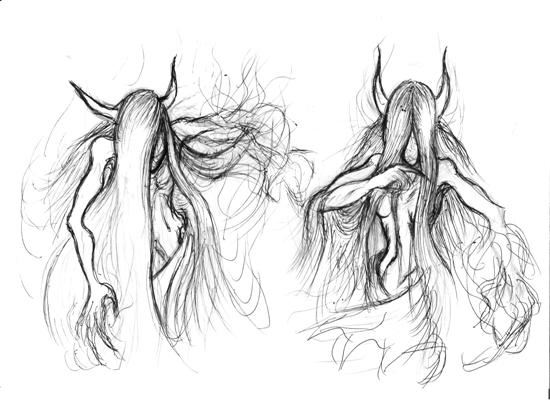 Are you were or the faeries in mainline campaigns?

There are lots of mages (red and white), but only one female silver mage.

Many fighters too. Especially for guards and such dialogs.

The full size xcf is to large to be posted. But tell me if you want them. There is a lot of filter, distortion and resizing involved to make them to look good in the same picture. You can always salvage mainline campaigns yourself. Recoloring is an easy option too.
My Temple Project: http://forums.wesnoth.org/viewtopic.php?f=23&t=29800
This is "must-play" campaign! Don´t read the thread, unless you need help. http://forums.wesnoth.org/viewtopic.php?f=8&t=31895
Top

BTIssac, your sketches look good to me. I don't really want to be too nitpicky about the details, so I don't have any additional comments for the portraits before you color them, other than that they're honestly a lot better than I was expecting. Thanks a lot!

Tet, the mainline faerie portraits are fine where they're used, but I don't really feel that they fit well as portraits for the faerie unit sprites. Also, for the eventide line, no amount of distortion or recoloring will make that work because they're fundamentally different from the faerie-like units in mainline. It wouldn't hurt to put them in as placeholders, but I guess it really depends on whether or not people really want different portraits for each of the faerie sprites in my campaign, or if they're content with me just using the druid portrait for now.

(Feedback for that is probably best put on the campaign thread: https://forums.wesnoth.org/viewtopic.php?f=8&t=43023).
My patreon
Top

The artist who created this popular background did make 4 portraits of 3 characters which are not used anywhere. (elvish druid, guard, recruit). Maybe these are useful for you? He posted high resolution and said utilize as you see fit.

I just checked the license: The proper name is CC BY-NC-SA 4.0.
https://creativecommons.org/licenses/by-nc-sa/4.0/
Top

Those really aren't the type of wings I had in mind for the fae. Their portraits will not have to adhere to the "wesnoth-style", but I don't want them to be cartoony either. They should look realistic (as in, the wing texture should be based on the structure of a real wing, e.g. butterfly, bird, etc.). That, and I want to see how BTIssac draws faerie before thinking about portraits for Yumi, Aryel, or Esther.

(To be honest, in truth, the wings do not need to be so prominent in the portraits, but we'll get to that when it comes time to handling the fae portraits. I still will probably end up asking a professional artist to draw them.

P.S. BTIssac, you may want to specify the license under which you're releasing the portraits. Otherwise, they will be under GPL, as I understand it (that is fine if you're okay with it).
My patreon
Top

Should be awesome to see a pro work these fae! Sorry I only can do cartoony, but that is why I am not drawing people. Luckily you have BTIsaac.

I like this CC! Did you pick the most annoying version of it? 4.0 sounds very modern! Everything with this number must be great!

Anyway, sorry for posting to much resolution. Scaling things down is easy for me. Here is a less prominent wing. Transparency works like a charm too:
viewtopic.php?f=23&t=44560&p=624176#p624176
Top

Well I'm not an expert on licenses. I'd like to be credited. Also the stuff i post here can be used within the game without further permission but not outside of it, without asking me first. Not sure what license is best for that.
Top

BTIsaac wrote: ↑March 2nd, 2018, 8:56 pm Well I'm not an expert on licenses. I'd like to be credited. Also the stuff i post here can be used within the game without further permission but not outside of it, without asking me first. Not sure what license is best for that.

Wesnoth's software license is the GNU General Public License 2.0. The terms of the GNU GPL 2.0 state the following:

Father Stallman wrote:You may not impose any further restrictions on the recipients' exercise of the rights granted herein.

This means that your second condition limiting the open usage of your work outside of Wesnoth's context would be considered a violation of the GNU GPL, and would prevent your work from being allowed on Wesnoth's add-on servers.

What you want is known as copyleft license: a license with permissive restrictions that forces derivatives of the licensed work to also carry those permissive restrictions. I'd recommend Nemaara's license for her artwork: the CC BY-SA-NC license. This allows for free distribution of derivatives of your work, requiring that whoever uses your work be attributed for their usage of it. They'll never need to ask you for permission, but they'll be unable to use your work in a commercial context.

A list of 'free software' licenses, some compatible with the GPL, can be found here.

* I am not a lawyer. I don't even approach being a lawyer.
Top

If you do not believe me, follow your link!

For the record: I already recommended that to BTIsaac.

I think i understood half of it.


This allows for free distribution of derivatives of your work, requiring that whoever uses your work be attributed for their usage of it. They'll never need to ask you for permission, but they'll be unable to use your work in a commercial context.

Uh okay sure. Whichever that is, let's go with that.
Top

Like previously said, I use CC BY-NC-SA 4.0 for artwork, so just mention in your thread and when you post that your images are licensed under that (if you so choose, or you can pick whichever one you like). If you do this, I can add your portraits to my CC license file whenever I use them.

By the way, here is a sprite for the level 3 berserker demon for extra reference in drawing portraits. I need to shade the right arm and leg a little better, but otherwise it's mostly done.

I have drawn a set of faeries for the healer line. This means that all faerie types should now have a unique (non-recolored) sprite. Note that the sprite in the upper row (tier 3) was drawn by shadowm, while I drew all the others. Feel free to provide critique!

I have a clear idea for the fiend line. The fairies look good, and the differences between different tiers are subtle enough that no more than two portraits will be needed.
Top

They are great! Nice advances to bigger levels.

Just one point: Replace the one from shadowmaster! It breaks consistency.

Basically it looks like a set back from level 2.

If you really really want it, I would swap it with the level 2. Or just rework there wing in your style.

The pink dots are TC? I like the idea to highlight the level 4.
Top
Post Reply
94 posts