I would be interested in both the Yokai units. That faction could use some higher level units.
Justice is what happens when someone with a sword kills someone without a sword.

Nice i like those fire units in line C, and the khalifate look really good!

*Claws out of the Earth*

See this is why you play Undead. You can always count on a necromancer to have your back. I don't bring cut outs like I promised but I bring pictures for a campaign I'm working on.

First idea is a Saurian unit based on one I found from the forums. Talentless I believe. No that's not an insult, Talentless was the screen name of the guy. I haven't done much other than try to give it a bag/backpack(Lifted from Dwarven Miner for Scepter of Fire). I then made an upgrade for it. Currently neither of them do much in the campaign though I picture the Looter to either steal gold or gain HP/Damage through kills(Like they yoink weapons or armor to use). Problems;better chest, need to make the weapon stand out a bit more and same with the bag.

Other idea was to have a Hammer Saurian. I know they exist(In Across the Ocean) but I like the idea of a larger hammer than the little ones they have. Yoinked it from Dwarven Fighter line. Need to fix the arms and it still uses Gatherer as a base. So need to fix the chest.
Top

These saurians are really good!

Maybe a rework of the Looter. Or upgrade.

Messing around with the idea of Gatherer breaking off into two lines. One is the Looter, bashy line. This line, Forager, is more lightly armed and geared but has an advantage in ability/range(like one more movement and comes with a Slow effect on their bash).

I also like playing around with the idea of Saurians making weapons based on whatever they can get since they aren't allied with Drakes outright(At least not in the campagin I'm working on). So simple weapons, in this case just a lump of metal at the end of a stick. Also the shields...., well I don't know what the normal shields are supposed to be made out of(How much blacksmithing do they do) so I'm trying recolors to make it look more leather or wooden. I'm not sure about my success.
Top

You have done a good job, and I like the idea of more primitive weapons! Maybe some saurians wood even throw stones. Also I can imagine that in a swamp it is hard to come by good weapons and many saurians would be limited to sticks such as you have drawn. (Also if you are interested in high level saurians the next update of my era The reign of the lords includes upgrades for all saurians up to lvl 4)
Creator of: The Reign of The Lords Era,The Gnats Franken Dungeon
Co-designer of the (not-wesnoth) space combat video game Planet Bounce.
Top

Rise from your grave

Agh, lost my computer earlier this year. Trying to see what I can salvage. Also work/other hobbies kept me from really doing much. So here's a small thing if people still like to see some stuff. What was I working on, oh right Saurian stuff! 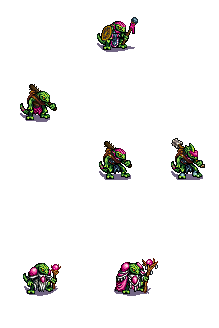 Top guys are the gatherer line. Gatherer into Forager, or into Looter into... .not sure. Scavenger? Might name the promoted Forager that though. Hmm. Still need to fix some parts and get Forager an upgrade(It's not easy to recolor the Flanker shield like it was Ambusher).

Second one was from... whoo I can't recall actually. Found it off site I think that had other wesnoth sprites. I think they are floating around here somewhere though. Really all I added was the little sphere in the staffs. Part of the idea for the campaign I'm working on is that the tribe you play as starts learning human magic. Gonna need those little orbs right?

Oh and this too.

Took some sprites from "Across the Ocean" I believe. Saurians had halberds and had a downward swing. Oh that looked perfect for Forage and their clubs. SO yeah, I can toss the sprites at someone if they want. Might need some fixing up though. When I used them in game, part of the mace was left behind after the attack, like the shadow of a previous sprite. Dunno if that's an art thing or programing thing though so watch for that if you use it.
Top

saurian mages were taken from drazelic's pixel joint, but I dont see much differences other then you took out the flying shards and placed an orb on the staff.

ghype wrote: ↑
October 5th, 2018, 6:08 pm
saurian mages were taken from drazelic's pixel joint, but I dont see much differences other then you took out the flying shards and placed an orb on the staff.

Thank you for that. I at least try to give credit when I can so it was bothering me that I couldn't recall where I found them.

Could try changing the robes up a bit more, add more orbs. I liked what drzelic/zerovirus did, I just didn't like the little shards(Though debated using them as is for the campaign). But could see what to do to make it seem like a Saurian raided a mage's gear/closet
Top

Okay let's see how this looks to people.

Changed him up a bit. Tried to make it look like they ripped some clothes off a mage, maybe sewed the stones on the shoulders to carry easier. And you always need a book right? Looks better but unsure. 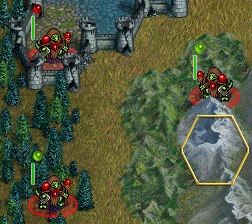 And a look in game.
Top

the attempt definitely works out pretty ok. However, not sure how advanced they could be if they had power gems/runes to use magic. wouldn they rather gather magic from nature or spirits rather then gems?

other then that seems fine
stuff I worked on: Dunefolk Rework - ghype's Daily Art
Top

ghype wrote: ↑
October 7th, 2018, 3:24 am
the attempt definitely works out pretty ok. However, not sure how advanced they could be if they had power gems/runes to use magic. wouldn they rather gather magic from nature or spirits rather then gems?

other then that seems fine

Shrug. Who can say they need the gems/runes to power the magic(Though Rune Magic is always a favorite of mine to see played around with).

Lore/background wise for these guys is a Seer gets a vision and goes on a quest to get supplies to fullfill the mission shown to him. To do this, part of him realizes he's going to need to learn how to cast fire. Or maybe just fire in general. Hey those human mages use Fire all the time right? Let's steal their books and staffs and learn how. You have to have the robes on to cast right? Hey spell casters, put that stuff on. Can't hurt can it?

Does it allow them to actually cast fire spells or do they believe it and wear it anyway. Choice is yours, I just wanted a different sprite to signal the fire spell casters I'm adding to Saurians
Top
Post Reply
28 posts