Unit sprites for After the Storm

Forum rules
Before posting critique in this forum, you must read the following thread:
Post Reply
118 posts

The intended progression for the melee line from L1 through L3 is as follows: no armor → (predominantly) leather armor → addition of some metal plates and basic ornaments*.

(* That doesn’t mean that every single detail has to be portrayed on the sprite, of course. As a spriter myself, I know how foolish that would be. I’m fine with a simplified depiction that can be elaborated upon by in-game portraits.)


Mefisto wrote:What should be their weapons? Poleaxes or glaives?

For the L1, a very crude blade weapon thing, just like previously depicted. The L2 and L3 were always meant to bear poleaxes, although artisticdude appears to have downgraded the L2’s to a more generic axe on account of my sloppy depiction of the weapon in the original sprites. I think his change adds some well-deserved variation to that branch of the unit line.


Mefisto wrote:And should the wings of zephyrs be covered with feathers or naked skin bat-like?

The latter. Avian-like wings belong to a whole different species which will be depicted later.


homunculus wrote:at least from the previous discussions i got the impression that demons consider themselves the most heroic and true warriors in the universe

No.
Author of the unofficial UtBS sequels Invasion from the Unknown and After the Storm (now available for Wesnoth 1.14.x and 1.15.4+).
Top

I didn't say the hair was a bad thing.

I like it. I didn't see the horn thing at first that's all. Sorry if it seemed like a criticism. I also like that the hair is not symmetrically "combed".


artisticdude wrote:I've been under the impression that the proportions of Wesnoth sprites include deliberately shorter arms

Some seem to believe wesnoth have shortened torsos too. Personally I don't see why. A few units might be leaning that way I guess... Might it be because I said to move the waist up a bit on some sprites posted in the loyalist thread? It just seemed more appropriate to me that the waist of the armor would sit higher, something I would have made more clearer I guess. Then again it might have had nothing to do with me.

If anything there's a lack of necks. (in general wesnoth)

That is what I thought it looked like, so to me that was successful. It would be cool to have it that way...

Homonculus gives some good advice about the angle of the wings.


Mefisto wrote:I would like to confer with the others what the grunts and warriors should wear: shining bronze breastplates or some cloth? What should be their weapons? Poleaxes or glaives?

Imo it would be mostly leather with cloth which is Shadowmasters original intent, with a few bits of metal (oops SM beat me to it). As for the weapons in the portraits I was going for a golden-like color. But as gold is crap for weapons I was going to propose that it is phosphor-bronze which is a bit more yellow to normal bronze...


artisticdude wrote:I do want to avoid the common videogame stereotype of slapping the Hindenburg x2 on the front of every female character in the game, which is a ridiculous departure from the realistic female form (indeed, it's little more than a marketing ploy targeting immature adolescents)

Yes that's good. But these are small scale sprites with all manner of exaggerations depicting a rather muscular female. For me I would rather have it instantly look feminine... Huge bazongas could well be avoided for that, but it does help. Whatever looks best for the sprite... Anyway, try widening hips/narrowing shoulders and torso/waist see how it turns out. In moderation ofc.

EDIT: A tweak. Oops I created a tangent doing this, oh well.

For the Zephyr's Wings... what about using neither bird nor bat, but the third group of flying chordates, the Pterosauria? Or their wings might use an entirely different structure for wings, especially as demons are obviously not restricted to evolution as happened on a completely different planet.
After far too long an absence, I have returned.
According to the quiz 100% Silver Mage (85% Archmage, 75% Shyde, 67% Flameheart and Ancient Wose,58% Assassin, Troll Warrior and Berserker). And my top score is exactly how I see myself.
Top

I've got a good flow this weekend. The weapon I devised for L3 may be too elaborate but it might do. It was fun to tweak the sprites and I envy artisticdude's ability to create interesting palette. And units design of course. I almost finished zephyr - male, I only have a female to create. I can also think of the other types of blade for weapon. The medieval poleaxes were very ingenious. 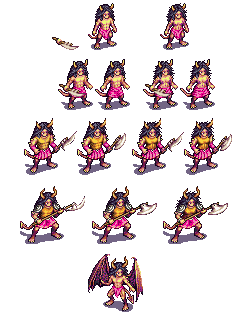 I like what you did there, these are getting even more better all the time.

I didn't say so yet but yeah awesome palette.

They all lean forward a tiny bit which is ok. But I think lvl1 female looks shifted too much. I made some more edits. The three to the left are mine.

The wings are very nice but I am not so sure about the dithering. What texture did you try to make? It's kind of too grainy.

I finished zephyrs and now the only thing left is cleaning. The texture on wings right now is kind of random, because clean one was not looking good. I'll look at your edits of L1 today.
EDIT:
OK. I see what you mean. They lean too much forward. And female regular is too sexy for battle demon. I'll work on them. 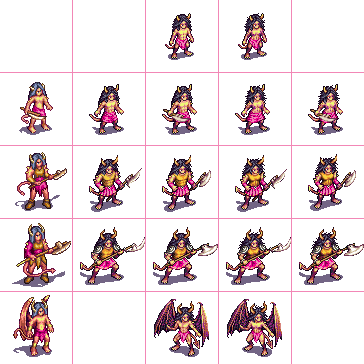 Hmm I like artisticdudes rendering of their torso armors more.

Something's bothering me about the horns. I thought maybe because the horn closer to the viewer would appear bigger, but now I'm not sure.

Ideas, Sleepwalker?
Creator of Shadows of Deception (for 1.12) and co-creator of the Era of Chaos (for 1.12/1.13).
SurvivalXtreme rocks!!!
What happens when you get scared half to death...twice?
Top

I know what's wrong with horns. I made few revisions of different body parts for each unit and then I was merging together the best ones. Somehow the corrected horns for L0 and L1 units didn't appear in the final design, though L2 and L3 have correct racks. I hope this is what you mean.

I'll work on bust of L2. I see what went wrong.

What do you think about weapons? And about hairstyles? It was a kind of joke to make males with neat hair and females with messy and wild hair but it can be corrected easily if nobody is amused.

I thought more about L1. Artisticdude designed them in such way so they look like they have nonhuman legs - more cat-like. You can see how the knees are shaping. So for such body build is natural that they slightly lean forward and the tail works like counterweight. The problem is that we cannot shift the upper body left too much because the unit will look like it has too flat chest.
I think we can lower a tail even more (I did it already) so we have more room for the arm holding weapon.
Top

the horns could look better on darker background, because the dark outline might make the left horn larger on lighter background.
and the right horn is more foreshortened, so it should be right that it should look shorter.

the side of boob is not really one curve to the shoulder, but two (red arrows in the attachment), the upper line is the pectoral.
the characteristic feminine spine is more curved than the male spine, and making it look feminine is not just about making the hips larger (or just pasting boobs over a male body).
if i didn't miss anything, i either see one or the other in the sprites, but not both in the same sprite.
i think those two points combined with bringing the right shoulder joint bit more towards the body might help with some of the mentioned posture problems.

btw, is the body of the winged female shaded from south-west right now?

These later ones look like the highlights are "blown out," as in there isn't much transition from the lightest part to the medium tones, most noticeable in the torsos.
Biased Random Damage Mod
Top

things I don't like (after looking at mefisto's latest version):
Top

I like your edit, Blarumyrran. As you say, it's instantly recognizable as a female unit. Only nitpick is it seems redder than the other sprites.
Creator of Shadows of Deception (for 1.12) and co-creator of the Era of Chaos (for 1.12/1.13).
SurvivalXtreme rocks!!!
What happens when you get scared half to death...twice?
Top
Post Reply
118 posts