There is a fountain floating around in UMC-land that is a scale-down of a larger image and may or may not be copyright-safe (not that there's a lot of money on this, but ...). So I am trying to replace it. I don't have the animation worked out, but I think the base is about there.
EDIT: This was the fountain I was referring to: http://forums.wesnoth.org/viewtopic.php ... 54#p524454 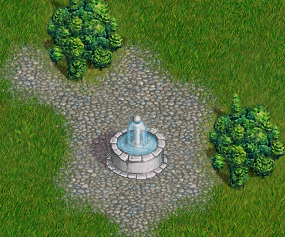 There's always this one. It's in AtS, but I could've sworn I saw it somewhere else too. 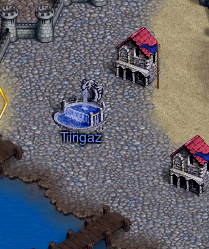 vultraz: I mentioned elsewhere that the fountain in question was originally made by musketaquid.

Also, it’s always good to have some variation for this kind of things. There can never be too many props for us to use.
Author of the unofficial UtBS sequels Invasion from the Unknown and After the Storm (now available for Wesnoth 1.14).
Top

shadowmaster wrote:vultraz: I mentioned elsewhere that the fountain in question was originally made by musketaquid.

Oh...didn't look at that link in that NewVillage Types thread

shadowmaster wrote:Also, it’s always good to have some variation for this kind of things. There can never be too many props for us to use.

amazing, someone is drawing a fountain at an angle that seems completely consistent with the village images : ))
(unlike the 'tirigaz' fountain that seems to be from a lower angle and is disturbing that way.)

maybe the fountain could be as large as a small house? that is, slightly smaller.
campaign ruthless in your nearest 1.11 add-on server
some wesnoth-related drawings
Top

I find it too smooth; it looks like concrete.
Also the shadow seems to extend out too far.

Will this be animated?
rmj
Top

Thanks, all. It probably could be smaller, or rougher, depends upon what it is supposed to be. What's wrong with concrete?

I tried to animate it, but it looks like crap. Will have to work that out.
BfW 1.12 supported, but active development only for BfW 1.13/1.14: Bad Moon Rising | Trinity | Archaic Era |
| Abandoned: Tales of the Setting Sun
GitHub link for these projects
Top

I dont argue against Concrete but suggest some Materials/Textures:
* Granite
* Marble
* SandStone

Wesnoth plays in a Time with technological Level we associate with (romantic) MiddleAge. As we are used Artefacts from that Time (in Europe) often broken/damaged by Time/Weather/History we (often) expect that Artefacts (eg Castle) of that Time in that Time have to look aged like those we saw in Photos or personally. Thats obviously NonSense as the there dont construct mossed Ruins but fresh (still) shiny Buildings.

In terran-human History Concrete appeared as SideEffe of Industrialization as you need alot Energy for Production of Cement and heavy Machines (and alot Steel, Engines, Technology) to produce significant Amounts of Cement/Concrete. Having both Concrete and Steel in large Amounts available for Construction have a large Impact on Architecture:
Vaults and Domes wasnt just build due they look nice but it was the only avaible technical Solution to create large Rooms and Halls with ceramic Materials (Wood require other Techniques but organic Materials can burn and decay relative to Ceramics much faster). These Buildings wasnt just nice but also MODERN for their Time.

If we introduce Concrete we have to deal with Constraits and Impacts.

As Production of Steel have as ByProduct Slag we get small Amounts of Material well suited for Cement.

In those Days of MiddleAge Energy and Steel were very expensive. Today we wrap and expose SteelTins we use even to store Foods. In MidAge People normally didnt go and bought a Knife but took any SteelItem they already had and ask the Smith to forge a Knife from.
Due to the high Value and Costs of Steel i wonder why a heavy steel-armored Unit takes the same Costs on recruit like a lite Unit like an Archer.

Fazit: even with small Amounts of Concrete and Steel they wont build SkyScrapers with.

I think a Fountain of Concrete is ok but still wonder if that is 'from waste' (slag) and thus 'cheap' or is it 'rar and expensive'.

FYI my mobile can just edit 2000 chars per post.

I think we should consider that all races like humans, elves, dwarves and also orcs and goblins would normally climb up technologyLadder and anytime go space and visit far stars, planets and foreign races/cultures. If we want to "freeze" their envelopment we need relapses. Probably most dont want SuperTec-Races but where ever stop drawing their envelopment we should draw the line reasonable/credible. Assuming differant Ages and Changes in Culture with Impact at Artefacts we have to consider 2 related temporal Attributes: which Time (Age->technology,style) it bases from and which Age it have resp. which Time the Story happen. Without defining these we could consider Concrete as very late to MidAge but even 50y aged the Fountain would look much lesser fresh.

Due to several Constraits I suggest the fresh Type, derivate an aged Type (Mosses, smaller Damages) and perhaps also a ruined Type as we have also ruined Villages/Houses.

Keep it up to the Understanding and Needs of the Map-Designer to use it. At Present we dont have any Fountain for Villages and anytime there will be Concrete and a Fountain new. I would use 85% aged, 5% ruined and 10% new Fountains.

Regards, MetalKing
Last edited by Iris on April 4th, 2012, 1:25 am, edited 1 time in total.
Reason: Merged two consecutive posts.
"Sir! We are surrounded by our enemies!" - "Excellent ! We can attack in every direction!"
"Make everything as simple as possible, but not simpler." -- Albert Einstein
No Source - No Binary - No Trust!
Map Wesnoth Springs - The great War [200x120],Player=9
Top

@MetalKing:
Dude...
http://en.wikipedia.org/wiki/Concrete#History
Ancient Romans were using it. True, the art of making concrete was lost in middle ages, but still. This is in no way a modern technology. Reinforced concrete is another thing.
ride on shooting star
Top

I tried smaller fountains, can't say I really like it. They'd need to be very simple and icon-like. I'm going back to bigger. 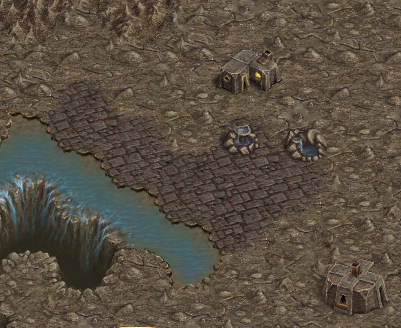 I like them, and I like the size too. In relation to the houses the size is perfect.
Author of Antar, Son of Rheor ( SP Campaign) | Development Thread + Feedback Thread + Replays of ASoR
Top

It seems to me they're a bit hard to make out at first. Took me a few seconds to distinguish the different parts. Maybe lighten the water a little? There are also a few sections that seem way too dark, like the pillar in the left one and the section directly north-east of the flowing water in the right one.

Well, if you or anyone find them useful, here they are. I brightened the water, although I'm not sure it fits for underground water. It is difficult to get much detail in this size, unless it is sharp corners, which I don't think make sense for these.

em3 wrote:@MetalKing:
Dude...
http://en.wikipedia.org/wiki/Concrete#History
Ancient Romans were using it. True, the art of making concrete was lost in middle ages, but still. This is in no way a modern technology. Reinforced concrete is another thing.

thank for correction. I didn't know that. I did anytime recherged about concrete and now remind I skiped reading about that period of time.
"Sir! We are surrounded by our enemies!" - "Excellent ! We can attack in every direction!"
"Make everything as simple as possible, but not simpler." -- Albert Einstein
No Source - No Binary - No Trust!
Map Wesnoth Springs - The great War [200x120],Player=9
Top
Post Reply
15 posts • Page 1 of 1